Everyone knows that sharing great content is key to a healthy online presence. But finding that content can be a serious time suck. Enter: Quuu, with hand-curated social media suggestions.

Daniel Kempe, after a series of careers that ran the gamut — from builder, typist, telecoms engineer and freelance designer — decided to try his hand at content marketing. What he  found was a landscape teeming with great content, complimented by some great automation tools. But, while tools like Buffer were great for automating sharing, Daniel found that actually finding content to share was a major time suck.

“It was just a pain in the ass, really, to find really great content to share,” Daniel tells Startups.co.

And so, like so many startup founders before him, Daniel looked this  problem in the eye and said: I can solve this.

Daniel teamed up with PR professional Matthew Spurr and award-winning developer Mubashar Iqbal to create Quuu, the content marketing tool that relies on a decidedly old school method — hand curation. Currently, their content management team consists of four people who read and review between 40 and 50 articles per day, in order to select the best content for their more than 300 interest categories.  That content is then shared to users’ Twitter accounts automatically — or after being reviewed by the user.

It’s like having your own content manager — for a fraction of the cost. Quuu pricing ranges from free to $30 a month, depending on what their clients need. 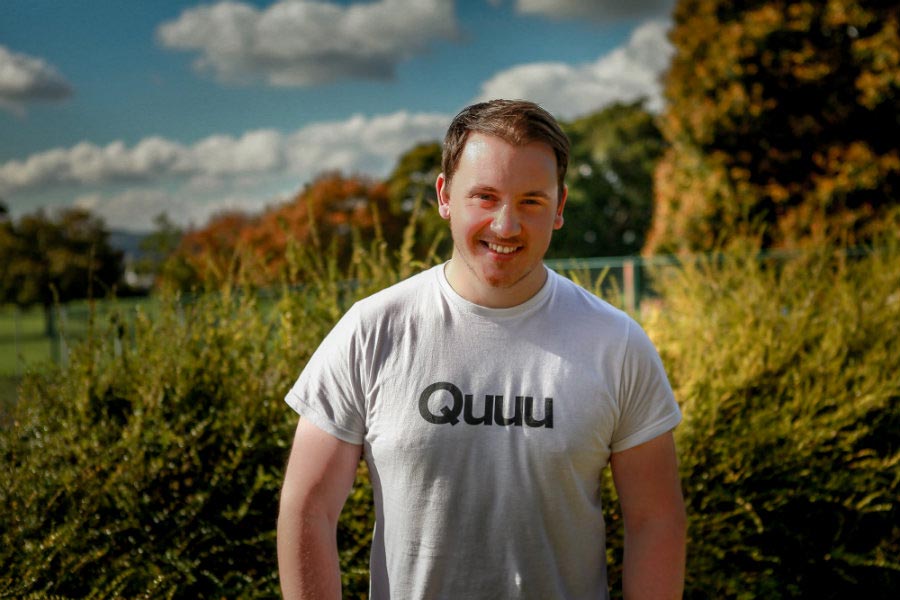 But Can They Scale?

Sounds a little too cheap to be true, doesn’t it? So Startups.co asked Daniel the million dollar question: Is Quuu scalable?

One way they’re working toward the vision of hundreds of content curators powering the only hand-curated automated content recommendation system on the web is through a perk called Quuu Promote.

Quuu Promote is an opportunity for content creators to pay to get their work promoted on the Quuu platform. Each submission is reviewed by the Quuu team — both manually and through automated checks for things like spelling and grammar — in order to ensure that the quality stays high on the platform. Content creators can pay anywhere from $10 to $50 per month, depending on the number of people they’re trying to reach, and Quuu Promote will push their work on Twitter, Facebook, LinkedIn, and Google+. The combination of Quuu Promote and Quuu’s standard service means they’re hitting both sides of the massive social media market: The producers and the consumers.

Scalability is, of course, a hot topic that investors are eager to understand. And, while Quuu is talking to investors right now, Daniel tells Startups.co that he isn’t quite sure whether they’re going to take VC money or not. Quuu is “basically profitable now,” despite the fact that they’ve spent “literally zero” on marketing so far.

Their secret to success? Their own product. Quuu has been using Quuu to promote Quuu. They’re eating the dog food — and apparently it tastes great.

They’ve also had a lot of success on Product Hunt, where their initial product got upward of 800 upvotes — and their subsequent launches earned over 600 upvotes a piece. Daniel says that each time they’ve been “hunted,” they’ve seen an uptick of around a thousand users. The key to rocking Product Hunt, he says, is creating a great network that will come through for you. Socialize with people on Twitter. Join Product Hunt-related Slack chats. And when you’re hunted, give your network a heads up — without asking for upvotes, of course.

These days, content marketing is a huge piece of the online landscape — with everyone from the local yoga studio to unicorns like Airbnb publishing and sharing blog posts. Blogs are an expected part of any business’ website these days, but they don’t do anything but take up server space if they’re not promoted properly — or if your company doesn’t have a great social media presence. Quuu takes care of the first problem with Quuu Promote and the second with their standard product. It’s an excellent approach to the relatively new (but very real) issue of effective content marketing.