Can the Millennial Love of ‘Chat’ be Professional? VentureApp is Betting on It

Chase Garbarino and his team at VentureApp know that the current options for job seekers online aren't making the cut. Their solution? Professional networking - with a millennial twist.

LinkedIn was founded in 2002 — and, even with its recent facelift, their basic product reflects that. While the world is moving on to more and more people working freelance (and  frequently working multiple jobs), LinkedIn is  stuck in the past —  a time when people would stay with one company and one role over an extended period of time. The interface is tired; their “inmail” system is annoying; and it’s really more of a utility than any kind of delight.

Luckily, while LinkedIn is a dinosaur in startup years — there are newer, younger companies yipping at its heels — companies like VentureApp. 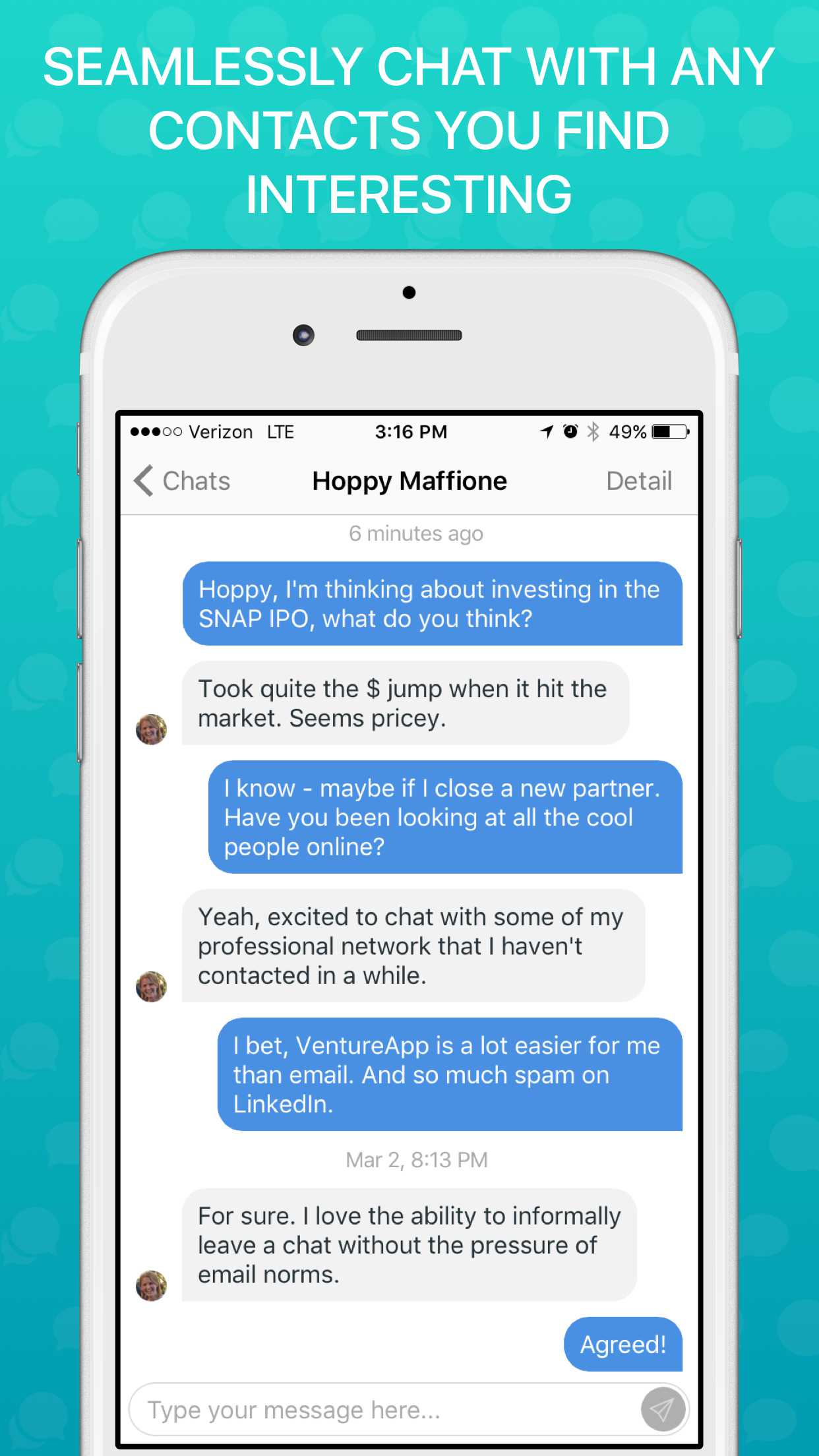 “LinkedIn is a really really really good resume database,” VentureApp CEO Chase Garbarino tells Startups.co. “But I think there’s a lot to be desired in the kind of engagement when you actually interact with people on LinkedIn.”

Garbarino describes the format of VentureApp as “not terribly different from WhatsApp” but acknowledges the fact that people communicate differently for business than they do in their personal lives. Their focus is the “innovation economy,” which may sound at first like it means “startups,” but Garbarino says that while tech startups are certainly part of their market, they’re welcome to any company that’s innovating right now.

Like most startup founders, Garbarino and his team have had to resist the siren call of feature creep, especially after raising a recent $4 million round.

“It’s important to keep feature creep in check,” Garbarino says. “It’s easy to try to boil the ocean in terms of adding features because you’re so familiar and ingrained in the concept of your product. But first steps should be focused on introducing and nailing the main concept of your product to users, building that behavior around it, and listening to users to garner feedback in order to formulate your next steps.” 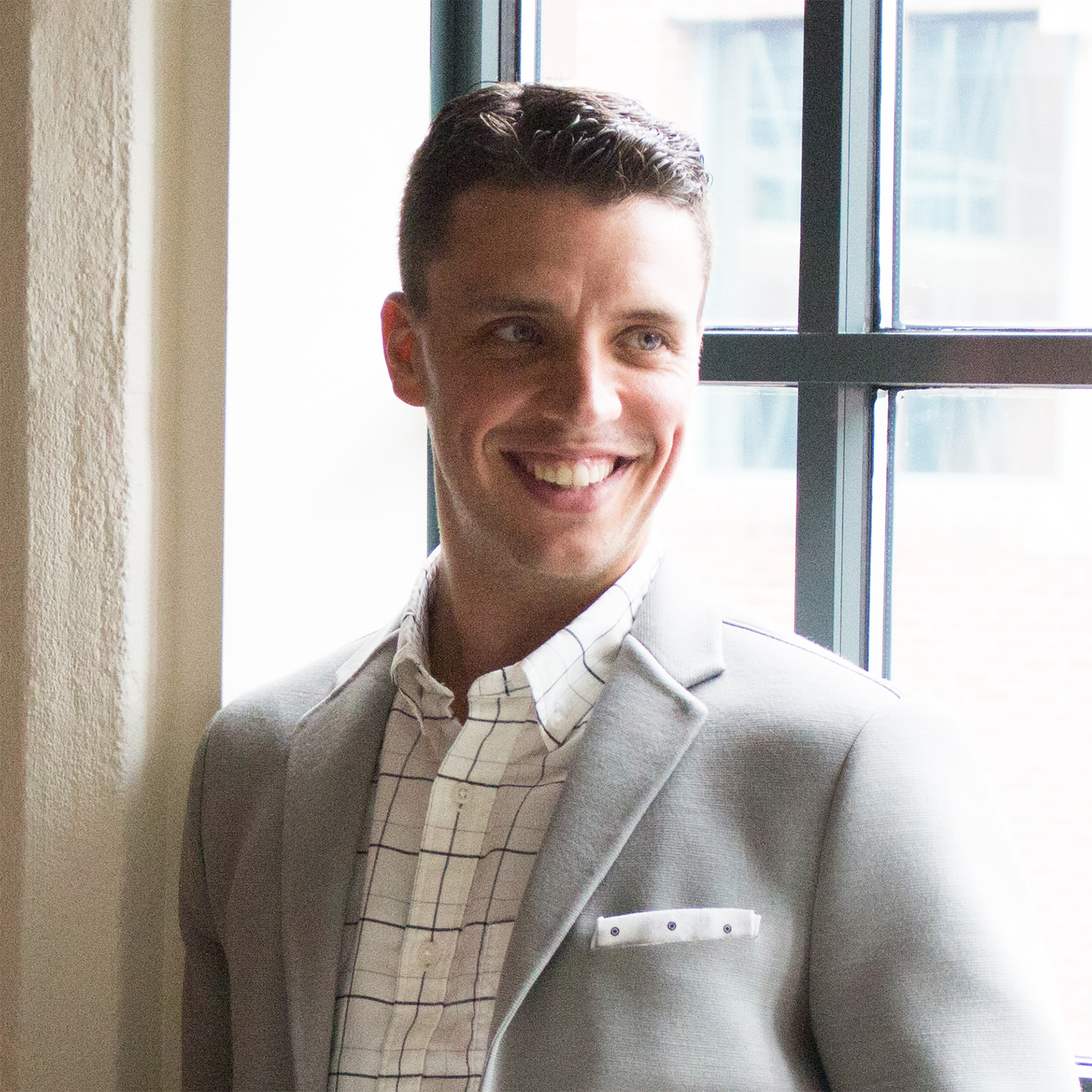 They’re banking on the idea that chat is the communication form of the future, based on current trends among millennials. They’re also hoping that chat, which is a format the majority of millennials in particular are familiar with, will make onboarding and customer education about the project easier.

“Really good startups make smart decisions about what they’re not going to do,” Garbarino says. “There a million things you want to do but just because you raised money doesn’t mean you do all of them. So I think being smart about doing a few things really well — and determining what you’re not going to do — is something that, strategically, every startup really wrestles with, even if they won’t necessarily admit it.”

But doing chat well — and letting the other potential features wait — is harder than it sounds.

“I’m the type of person that sometimes my eyes can be bigger than my stomach when it comes to features we can create,” Garbarino says. “Luckily I’ve got a lot of people who are a lot smarter than me who work at the company. They bring a lot of focus and discipline.”

Having a team around you that balances your characteristics is a great move for any founder. However, maintaining that effective team can be really hard once a company starts to scale. Garbarino says that’s the biggest problem his company is facing right now.

“You can’t lower the bar of who you hire when you raise money,” he says. “I’ve certainly made that mistake in the past when I raised money. Moving as fast as we want without cutting corners is definitely a challenge.” 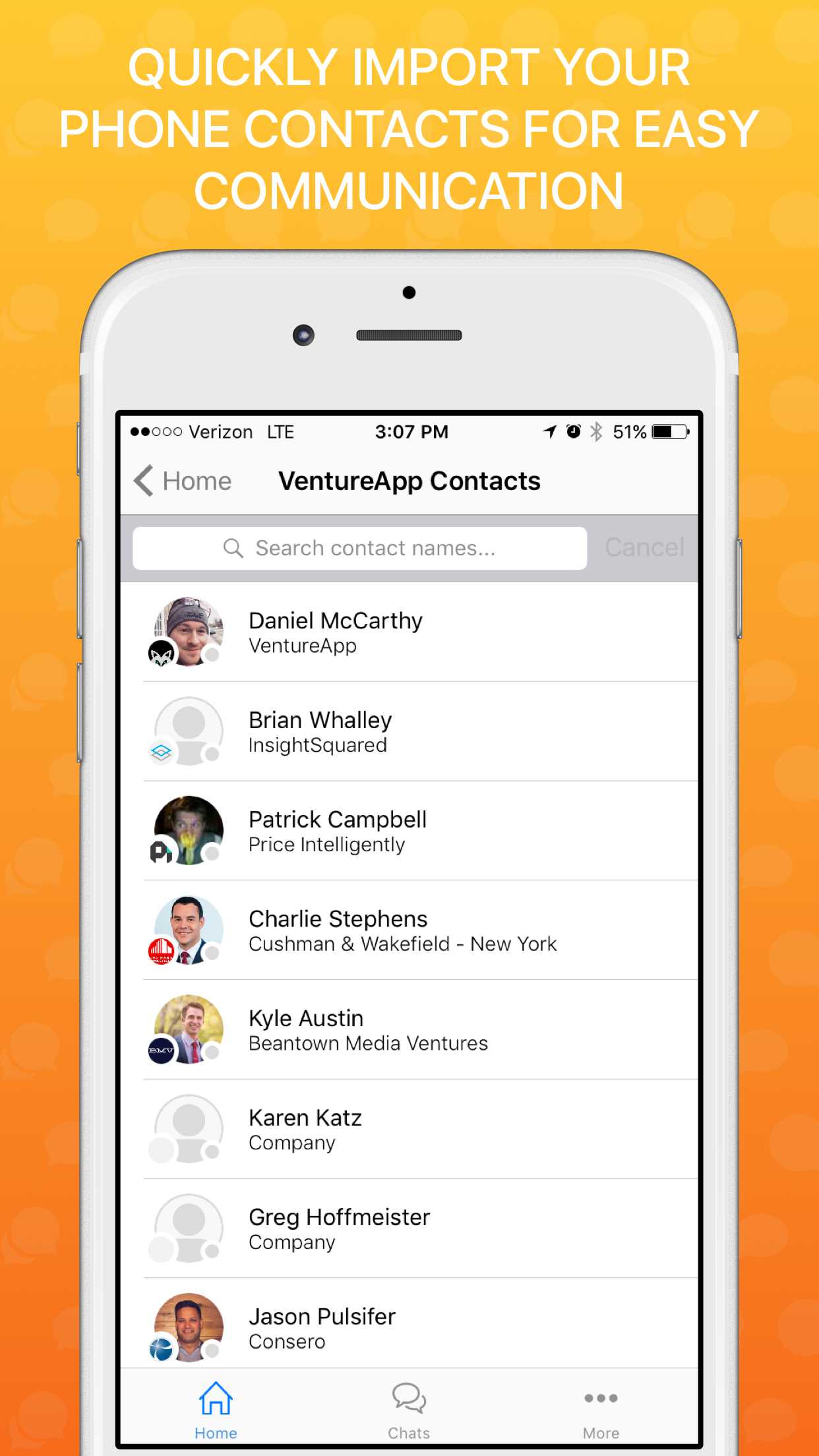 So what is VentureApp doing to make sure their team stays on point? Grilling candidates — hard.

“We very much try to scare people away from working at startups to see if they have what it takes,” Garbarino says. “We start with a phone screening and ask them a series of questions that tie back to our mission and values. For example, ‘Can you explain the importance of capitalism, entrepreneurship and small businesses in today’s society? What businesses are doing the most interesting, innovative work? What are you an expert at, or working hard to be an expert at?’ After the phone screening, we bring in candidates to meet team members and management team, and always give a skills test or project to test their fit further.”

But if history is any indication (Garbarino’s last company was a digital media company that was acquired by American City Business Journals), this is a team with experience moving fast and building things. Will chat be the future of professional communication? Will VentureApp be the company that we all go to in order to communicate with our professional networks? It’s too early to tell — but signs are looking good.