We define crowdfunding, explain why it's a different kind of fundraising, discuss the benefits, as well as the different types of crowdfunding campaigns.

Crowdfunding at a glance

Crowdfunding is a method of raising capital through the collective effort of friends, family, customers, and individual investors. 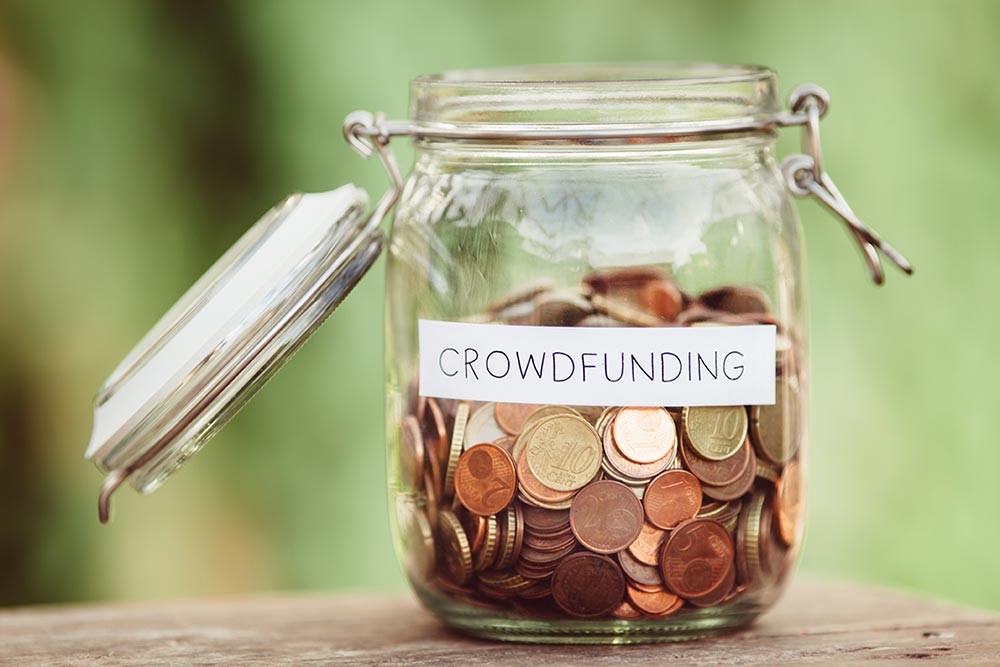 How is crowdfunding different from other types of finance?

Crowdfunding is essentially the opposite of the mainstream approach to business finance. Traditionally, if a person want to raise capital to start a business or launch a new product, they would need to pack up their business plan, market research, and prototypes, and then shop their idea around to a limited pool or wealthy individuals or institutions.

These funding sources included banks, angel investors, and venture capital firms, which limits options to a few key players. This fundraising approach is like a funnel, with the entrepreneur and their pitch at the wide end and the audience of investors at the closed end. Fail to point that funnel at the right investor or firm at the right time, and that’s time and money lost.

Crowdfunding platforms, on the other hand, turns that funnel on-end. By giving the entrepreneur a single platform to build, showcase, and share pitch resources, this approach dramatically streamlines the traditional model.

Traditionally, entrepreneurs spend months sifting through their personal networks, vetting potential investors, and spending their own time and money to get in front of them.

With crowdfunding, it’s much easier for entrepreneurs to get their opportunity in front of more interested parties and give them more ways to help grow the business, from investing thousands in exchange for equity to contributing $20 in exchange for a first-run product or other reward.

The benefits of crowdfunding

From tapping into a wider investor pool to enjoying more flexible fundraising options, there are a number of benefits to crowdfunding over traditional methods.

Here are just a few of the many possible advantages, which we’ll cover in greater detail later in this guide:

By using a business crowdfunding platform such as Fundable, entrepreneurs have access to thousands of accredited investors who can see, interact with, and share your fundraising campaign.

By creating a crowdfunding campaign, entrepreneurs go through the invaluable process of looking at their business from the top level — its history, traction, offerings, addressable market, value proposition, and more — and boiling it down into a polished, easily digestible package.

From launch to close, entrepreneurs can share and promote their campaign through social media, email newsletters, and other online marketing tactics.

As the entrepreneur and (hopefully) other media outlets cover the progress of the fundraise, entrepreneurs can double down by steering traffic to the website and other company resources.

Presenting a concept or business to the masses affords an excellent opportunity to validate and refine the offering.

As potential investors begin to express interest and ask questions, entrepreneurs quickly see if there’s something missing that would make them more likely to buy in.

One of the best things about online crowdfunding is its ability to centralize and streamline fundraising efforts.

By building a single, comprehensive profile to which entrepreneurs can funnel all their prospects and potential investors, the need to pursue each of them individually is eliminated.

So instead of duplicating efforts by printing documents, compiling binders, and manually updating each one when there’s an update, entrepreneurs can present everything online in a much more accessible format, leaving them with more time to run their business instead of fundraising.

There are four main types of crowdfunding:

Rewards-based crowdfunding involves individuals contributing to a business in exchange for a “reward,” typically a form of the product or service the company offers.

Even though this method offers backers a reward, it’s still generally considered a subset of donation-based crowdfunding since there is no financial or equity return.

This approach is a popular option on Fundable, as well other popular crowdfunding platforms like Kickstarter and Indiegogo, because it lets business-owners incentivize their contributor without incurring much extra expense or selling ownership stake.

More on preparing and launching a successful rewards-based campaign.

Unlike the donation-based and rewards-based methods, equity-based crowdfunding allows contributors to become part-owners of a company by trading capital for equity shares.

As equity owners, contributors receive a financial return on their investment and ultimately receive a share of the profits in the form of a dividend or distribution.

Equity crowdfunding is perfect for companies that are looking to raise more capital than those that choose a rewards-based approach.

These companies are typically seeking sums higher than $50k and have achieved social proof and gained enough traction to incentive their backers with the chance to own a small piece of their company as it grows.

The very nature of equity crowdfunding makes it a considerably more involved fundraising approach than rewards crowdfunding. Add to that the fact that it’s still a fairly new funding method and that the rules and regulations are still evolving with new federal legislation, and it can be a little tricky to navigate.

Here’s a walk through of setting fundraising terms, preparing a campaign, new legislation, and how to drive investors to a business for an equity fundraise. 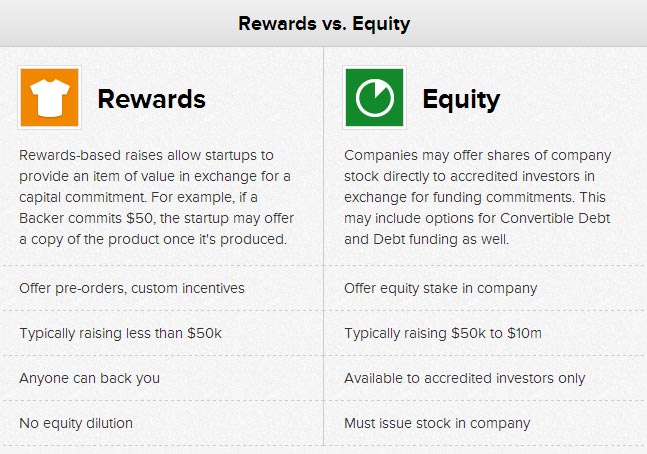 Lending-based crowdfunding allows entrepreneurs to raise funds in the form of loans that they will pay back to the lenders over a predetermined timeline with a set interest rate.

Lending campaigns tend to take place over a shorter time span of around five weeks and work well for entrepreneurs who don’t want to give up equity in their startup immediately.