Team Goals Are Your Company’s Recipe for Success

When you set goals effectively, you set your team – and your company – up for success.

“The trouble with not having a goal is that you can spend your life running up and down the field and never score.”
~Bill Copeland

It’s not exactly a groundbreaking claim to say that setting business goals is crucial to the success of any company. But sometimes, as Founders, we get so focused on the big-picture goals we have for our company, we forget about another set of goals we should be setting: goals for our team.

Trying to run a company without setting team goals is kind of like a football coach sending their team onto the field without a game plan. You may score a touchdown, sure – but the more likely outcome is chaos, confusion, and a whole lot of hurt. 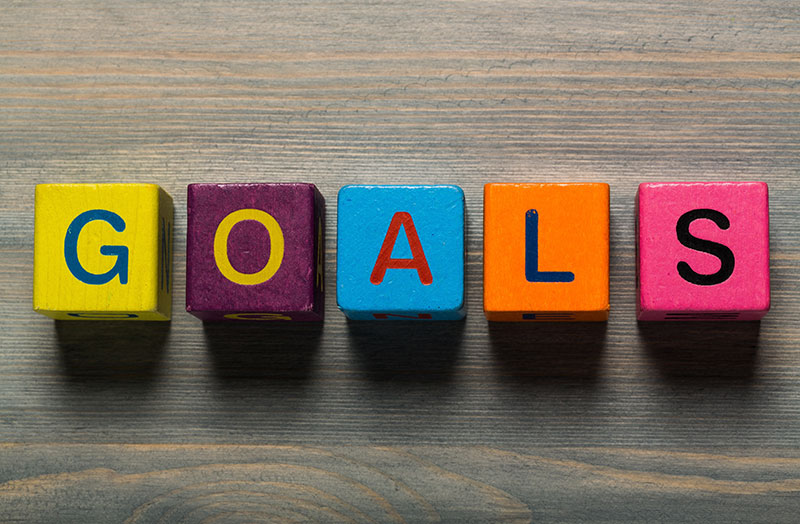 Below, we outline five key ingredients your team’s goals should have – with insight from entrepreneur and scholar Mike Moyer and Rocksauce Studios President Michael Manning. And the ingredients are:

1. TEAM Goals should be aligned

There’s a tendency to treat goal setting like a game of Pin the Tail on the Donkey: you close your eyes, spin around, point your finger, and it lands wherever it lands. But effective goal setting is a lot more intentional – and a lot more strategic – than that.

Your team’s personal goals should be aligned so that they move the needle on your larger company goals. To go back to our football analogy: if the big company goal is to reach the end zone, you want every team member’s goal to move the ball down the field.

So if the business goal is to hit $10K in revenue for the month: “A personal goal might be ‘10 sales calls per day,” Mike Moyer says.

Looked at this way, setting goals for your team isn’t stepping away from working on your company’s big-picture goals – it’s putting the pieces of the big picture into place.

2. Goals should be actionable

“When it is obvious that the goals cannot be reached, don’t adjust the goals, adjust the action steps.”
~Confucius

Raise your hand if you’ve ever made a New Year’s resolution.

Now, raise your hand if you’ve ever failed to follow through on your resolution.

If you raised your hand for both of the above – first of all, congratulations, you’re a human. And second of all: you’ve come up against one of the immutable truths of goal setting, which is that following through on goals is hard.

The number one reason most New Year’s resolutions fail is the same reason that a lot of business goals fail: because they’re not actionable.

As humans, we love to set vague, nebulous goals – lose weight, read more, make more sales – but the thing about goals like these is that they’re almost impossible to achieve.

In order to be attainable, a goal has to be actionable. What does a goal need to be actionable? As Mike Moyer outlines it, there are three – in some cases, four – key ingredients:

Without these three (or four) pieces in place, a goal isn’t really a goal at all – it’s a wish. And while wishes are great for wells and birthday cakes, they’re less great for moving your company forward.

So as you’re setting goals for your team, make sure everyone is clear on these three things: who’s responsible, when it’s due, and how they’ll be evaluated.

3. Team Goals should have a timeframe

“A goal is a dream with a deadline.”
~Anonymous

We all hated due dates in high school and college – but there’s a reason our teachers set them for us (or tried to). It was to get us in the habit of hitting our deadlines later in life, when they actually count.

A timeframe is like a goal’s backbone: without one, it goes wobbly and collapses. If there’s no urgency and no expectation of delivery, even the most conscientious of team members will be tempted to keep putting important projects on the backburner.

This may seem obvious, but it’s worth pointing out: the bigger and more complex the goal, the greater the amount of time to achieve it. With that in mind, Michael Manning advises starting any goal setting with your longest-term goals.

This goes back to our earlier point about alignment: done right, no team member’s goals, whether it’s short-term, long-term, or somewhere in between, should exist in a vacuum – they should all be working in coordination with other team members’ goals toward achieving the big picture goal.

4. Team Goals should have checkpoints

“Setting goals is the first step in turning the invisible into the visible.”
~Tony Robbins

Giving your team members deadlines for their goals is key, but don’t take this to mean that you can give someone a deadline that’s six months out, send them on their way, and check in six months. It’s not enough to have a deadline – you have to have checkpoints along the way.

The reason for this is basic human nature: when we’re confronted by a single massive obstacle in our path, we perceive it as impossible; but when we break that same task down into manageable sub-tasks, all of a sudden, it seems infinitely more doable.

Michael Manning advises breaking goals down into weekly, monthly, and quarterly milestones. “It’s like losing weight,” she says. ”I want to lose 10 pounds in 3 months – what will I do every week to meet that goal?”

But it’s not enough to set milestones – you have to follow up to ensure that those milestones are being met. Developers and project managers who are familiar with scrum methodology know how important check-ins are to ensuring that a project moves forward – why not take that same approach and apply it to your marketing and sales teams as well?

Scheduling regular check-ins with your team and tracking their progress is crucial, but beware of meeting fatigue. If you bog your team’s calendar down with too many meetings, you’re standing in the way of their success, rather than empowering it. There’s a fine line between an involved manager and a micromanager – make sure you fall on the right side of that line.

5. Team Members should have incentives

It’s important to give team members the freedom to drive their own goals  – but it’s also important to hold them accountable for hitting the goals that they set. And that means having clear incentives in place for when goals are met – and/or consequences for when they’re not.

As with so much about goal setting, the need for clear incentives boils down to human nature – and the laws of physics. As humans, we’re all prone to a certain amount of inertia, and it takes an equal and opposite amount of force to prod us into motion.

Of course, we’re not talking about actual, literal force, because A. that’s super illegal and B. the vast majority of behavioral science suggests that positive reinforcement is a more effective motivational tool than negative anyway.

Tying annual bonuses to achieving a certain outcome is the classic structure for incentivizing results, but don’t be afraid to get creative when looking for ways to motivate your team – particularly toward those shorter-term goals. Remember in elementary school when the class that brought in the most soup cans got a pizza party? You really wanted that pizza party, didn’t you?

All joking aside, the important thing is making sure team members are motivated to hit their milestones – and rewarded when they cross the finish line.

We opened this post by saying that trying to run a company without setting team goals is like sending your team onto the field without a game plan – but the opposite is also true.

When every person on the playing field knows the play and what their role is in executing it, the result is something well-choreographed thing of beauty. So what are you waiting for? The goals you set today could be the accomplishments your team is celebrating six months from now.

Need help with prioritizing your different business goals? Take a look at this post on the hierarchy of goals.

Looking for a tool to boost your goal-setting initiatives? Learn more the Startups.co template for S.M.A.R.T goal setting.

More of a visual thinker?
Check out our post on using visual maps to achieve business goals.