Rene Descartes is Killing your Startup

Building a company is hard enough as it is. Don’t neglect your body and lose out on the energy, focus, and mental health that physical health provides. 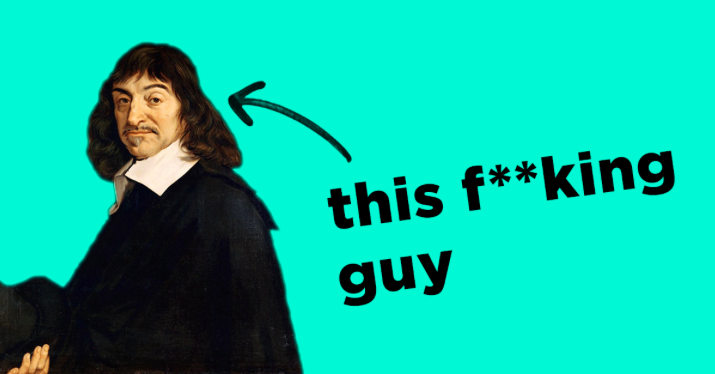 “Startups are really hard, but you have a duty to yourself, your team, [and] your investors to take care of yourself and to not neglect your health [and] wellbeing.” –Sam Altman, President, YCombinator

Not in person, obviously—he’s been dead for 350 years. But his ideas have lived on, convincing otherwise smart founders that the mind is the thing only thing that matters in intellectual pursuits, and that our bodies are just meaty life-support systems carrying around those minds and getting in the way.

I think, therefore I am

Descartes was one of the most influential philosophers and mathematicians of the modern era, creating the cartesian grid system, analytical geometry, modern algebraic notation, and in his spare time, writing some of the foundational texts of modern philosophy. It’s his work on the mind/body problem that we’ll be talking about.

The mind/body problem comes from his most famous work, Meditations on First Philosophy. The basic plotline is (spoiler alert!) that Descartes has rejected all previous philosophy as false, or at least potentially false, and has set out to create a new philosophy that is free from doubt.

After a bit of hand wringing about the nature of doubt, he makes it to the cornerstone idea of the book: that he is a thinking being. That is to say, the only thing that can be proven to exist is his mind — and so everything must be built from that starting point.

Thinking has kicked off this whole endeavor, and something must be doing that thinking. From that we get the famous conclusion, “Cogito ergo sum”: I think, therefore I am. While the philosophical implications of this conclusion are valuable and interesting, the physiological implications are dangerous trash.

To recap our, boy Rene thinks humans are ‘thinking beings’. Building from the idea that his mind is the only thing can be proven to exist, he concludes that the essential part of being human is thinking, his body is a secondary thing that his mind is tied to, and that he must doubt all of his senses. Running through this argument is the subtext that the body can’t be trusted and that the mind is somehow ‘pure’ and ‘above’ our brutish world.

If you believe Descartes, the mind removed from the body is perfectly rational and sublime, and that a physical body is, at best, dragging down this otherwise perfect thing. Maybe that’s true, maybe it’s not. But here, today, in the world that we live in, living with that mindset is going to get you in trouble.

You can see all around you that the mind is directly affected by the body in powerful ways. Improving the amount of oxygen in the blood makes you better at cognitive tasks, consuming caffeine can speed up thinking, and the physical effects of aging make you measurably less intelligent.

The physical health of the brain is key to its ability to think rationally, and you need to have your cognitive abilities at full strength to succeed as an entrepreneur.

Descartes does concede that the body can have an effect on the mind, but only to say that the emotions and passions of the body cloud rational thought — which is a HUGE cop-out.

The analogy he uses is that the body is a puppet, and the mind the puppet-master, and when we get emotional, it’s like a marionette tugging on its strings. Instead of taking the obvious evidence against his theory, he’s trying to claim that he’s still right. In his hypothetical world where we can observe the mind without the body, it would be purely rational. But we don’t live in his hypothetical world. 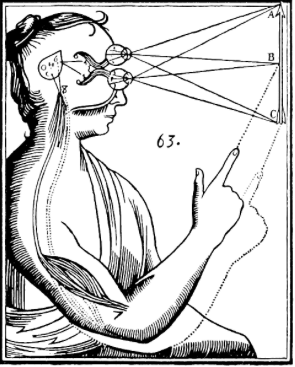 In our world, the body isn’t just a container for your mind, it is your mind. Without a functioning brain, there is no thought or consciousness at all (at least not in the way we currently understand it). Even when you are doing things that ostensibly only affect thinking, like reading, you’re doing it through the filter of biology: your physical brain is processing signals from your physical eyes, and then encoding that information back in your physical brain.

Descartes is right when he says that you can’t always trust what you see and feel. But if your biology is the only way you experience the world, then you better make sure it’s as trustworthy as possible, which is to say you better make sure it’s in excellent working order. And the best way to do that isn’t to ‘hack your brain’ — it’s health: eating a nutritious diet, getting enough sleep, managing stress, and doing some sort of regular physical activity.

The cult of the singularity

Perhaps unsurprisingly, Silicon Valley is full of people who would prefer to not have to rely on their bodies to do their work.

I’m not talking about engineers who want to replace eating with nutrient sludge, entrepreneurs mainlining nootropics, and ‘biohackers’ who seek to optimize their bodies like machines — while odd, this is ultimately a group that believes that making the body work at peak levels is key to making the mind work at peak levels. My beef is with the singularity cultists; the devotees of Ray Kurzweil.

The subtitle of Kurzweil’s book The Singularity is Near is When Humans Transcend Biology. And when you read it, you get the feeling that he bears an incredible disdain for the bodies that we all inhabit. When he talks about humans that have ‘transcended biology’, he says:

[We] will be even more humanlike than humans today. If that seems like a paradoxical statement, consider that much of human thought is petty and derivative. We marvel at Einstein’s ability to conjure up the theory of general relativity from a thought experiment or Beethoven’s ability to imagine symphonies that he could never hear. But these instances of human thought at its best are rare and fleeting; … our future primarily nonbiological selves will be vastly more intelligent and so will exhibit these finer qualities of human thought to a far greater degree.

The obvious implication here is that our current, biological selves are holding us back, that our thinking is limited by our biology, and that we must transcend it to become ‘fully human’. Kurzweil acknowledges that thinking is directly related to our biology, but then decides that the answer is to become non-biological. An alarming number of Singularity fans take this to mean exactly what Descartes fans take from Descartes: that the mind is key, and the body is secondary.

They attempt to replace exercise with hormone supplementation. They drink pint after pint of beer, because these new technologies are going to blow away any downsides to indulgence in the present. You can find countless examples of transhumanists who were overweight or out of shape until their 50s — when they started to really see the negative effects of aging.

But even the most optimistic estimates still put the technology for a non-biological human dozens of years away. So for the immediate future, everyone is still biological. But by making this choice, their lives today are directly impacted. They don’t feel as good as they could, they get sick more often than they need to, and they are worse thinkers than they could be.

Betting on the singularity is fine, but it’s no excuse to not take care of your physical health at all because “in 2045, everything will be silicon anyway”. Don’t you want to make it to the Singularity at peak performance?

A better way of thinking

It’s not an accident that some of the best, most respected, and most prolific writers are also avid runners. Elon Musk lifts weights. Sergey Brin is obsessed with gymnastics. Mark Cuban, unsurprisingly, plays pickup basketball. It’s harder to list very successful people who don’t exercise than ones who do. Hell, even Ray Kurzweil recommends exercise, a whole food diet, and proper sleep.

Physical work makes you better at intellectual work. It improves your ability to solve problems and take action towards a goal. It improves your memory. It staves off age related cognitive decline. In my personal experience, it helps dramatically in building willpower and discipline — and while the research there is thinner, science agrees that exercise helps willpower too.

Descartes, for all of his great ideas, got this one wrong. Instead of listening to Descartes, I like to go back to the Greeks. “We can dismiss as unnecessary the question whether the soul and the body are one”, Aristotle once said. “It is as meaningless as to ask whether the wax and the shape given to it by the stamp are one, or generally the matter of a thing and that of which it is the matter.”

When it comes to health and fitness, it’s a lot easier to read advice than it is to put it in practice. That’s why I wrote a little booklet to help you get to the gym and follow through on your goals. Get it here: Five Scientific Strategies to Actually Get Yourself to the Gym.

Kennedy Collins is a co-founder of Ohmcoach. He knows that when it comes to health and fitness, it’s a lot easier to read advice than it is to put it in practice. That’s why he wrote a little booklet to help you get to the gym and follow through on your goals. Get it here, free: Five Scientific Strategies to Actually Get Yourself to the Gym. Twitter: @kennedycollins