Private Equity vs Venture Capital— are your building your startup for YOU?

It’s easy to get lost in the Silicon Valley sauce. I know because I’ve been there. Startups are sexy and we’re surrounded by news of big rounds of funding, the newest cohorts accepted in to prestigious accelerators (like Y Combinator) and essays from legendary investment firms such as a16z.

The examples are endless.

They’ve all earned their names for a reason and produced excellent learning resources for aspiring founders.

But, there’s one caveat, often overlooked by new founders:
They create fantastic resources, tailored toward founders headed down the venture capital (VC) route.

This might seem like small fries— But, not being aware of this caveat can fundamentally (and subconsciously) shift an entrepreneurs evaluation of what a good, bad, exciting or stupid business is.

Like you’re wearing a fresh pair of “startup glasses” that alter the way you view and think about the VC business model.

“The term ‘startup’ has been narrowed down by media to describe the pursuit of total business domination. It’s turned into an obsession with unicorns and the properties of their “success”. A whole generation of people enthralled by the prospect of being transformed into a mythical creature. “
–@DHH; Basecamp Founder

A startup is commonly defined as a company built for high growth. If you agree with this definition and decide a startup is defined by it’s growth rate alone — that growth rate is heavily dependent on how the venture is funded. Raising large amounts of VC money essentially lets you choose your growth rate. A VC backed venture can afford to grow faster than an identical Non-VC backed venture as they’re not restricted to customer revenue to fund growth (even if the unit economics do not work). Therefore, in that definition, we’re implicitly using the funding method of the venture to determine the venture type — rather than the details of the venture itself.

However, that’s another story for another time and we won’t be diving into the blurred lines of what makes ‘a startup a startup’, as debates on definitions do not get me or you closer to our business goals.

So, for arguments sake, let’s bucket the two startup types in to two categories: Planes and Rockets. (Don’t worry! I’ll get to why, soon!)

But first, to understand the mainstream thinking around startups we need to explore:

—The popular VC business model.
—What makes a good startup (to a VC).
—The interests of a VC.

Venture Capital: ‘Get big or GTFO’ 🚀

VCs raise a fund from external partners, referred to as Limited Partners (LPs). The LPs are typically institutional investors who allocate a portion of their managed capital to these riskier investments such as venture capital. Given the heightened risk profile of such deals, the expectations are for VCs to generate abnormal returns on investments when compared to other asset classes such as: bonds, mutual funds and real estate.

So, now that the money has been raised and the expectations have been set by limited partners, the VCs start selecting high growth potential companies to build their portfolio. Looking at historical data, VCs are aware that most startups fail and that most startups they invest in will too fail. With their obligations to LPs in hand and the innate high risk of start up investing accepted… the smart strategy of the VC is to build a portfolio exclusively containing a particular type of startup that has the potential to dominate an industry and generate ~100x returns. The reason for this is that for any VC fund to be successful, its top investment has to end up being worth more than the entire rest of its portfolio combined.

Here is a common depiction of how venture returns are distributed amongst a VC’s portfolio of companies and an investment example to illustrate the economics: 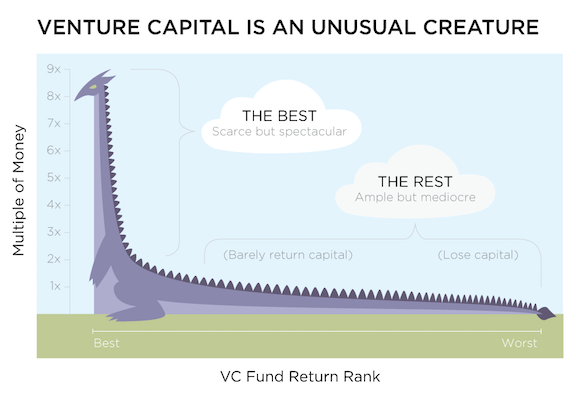 The VC model makes it absolutely non profitable to invest in any business which doesn’t have a very real chance of returning 100x in a short period of time. 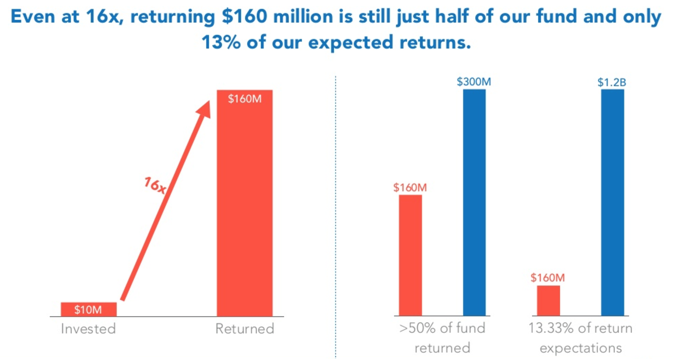 The left chart in the image above shows a 10m investment (from the hypothetical 300M fund) in a startup that returns 160M to the VC. This 16x return still only makes 13% of the funds target returns. You can really see why it’s 100x or nothing in the VC model.

With the VC’s obligations, incentives and strategy now established we can now move forwards and think about why you want to build a startup and finally hash out any discrepancies there may be. 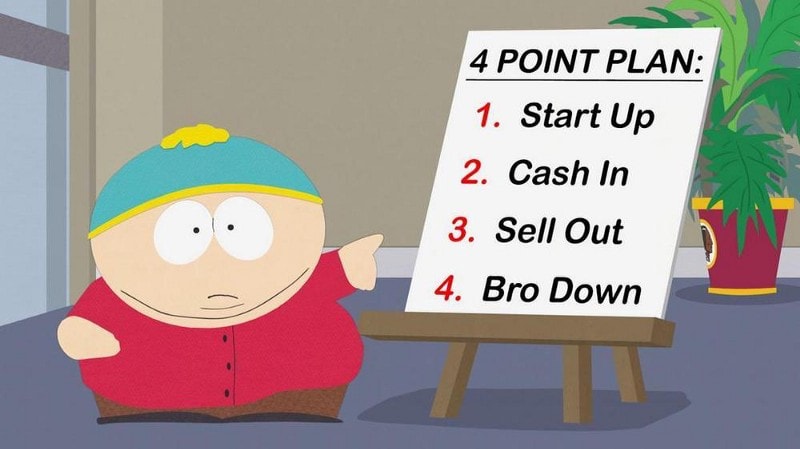 So why do YOU startup?

After carefully considering your answers to those questions you should be equipped to answer the final question below.

Are you set on building a rocket with exponential growth or are you open to building a plane that can generate significant recurring revenue?

Great 🚀 If after taking in all of the above and your vision, startup and market size align with those of the VC’s. Go all out down this path. There’s tons of high quality resources and funding programs out there. Here are a few high quality picks to dive in to below:

—YC Resources
—A crowdsourced list of EU: VCs’, Angels and Accelerators
—Pitch decks from your favorite startups who raised over $400M
—Venture Deals. The must read book if you want to raise money.
—Clerky: The investor friendly startup formation company.

Cool ✈️. If you see major discrepancies between your vision and the VC’s then it’s probably not for you. But no sweat. You’re not alone. There’s a growing number of founders who are finding themselves in this bucket too.

It’s becoming increasingly viable to bootstrap (or take minimal funding) and scale to millions in ARR due to the widely available information online, the decreasing costs to start up and increased access to advanced tech stacks.

Don’t get me wrong, VC is absolutely the right move with startups in winner-takes-all markets who need to ‘blitzscale’ the competition as Reid Hoffman puts it. But entrepreneurs should also be reminded that there is a whole world of possibility in business that does not follow the Silicon Valley playbook.

Sadly the funding market hasn’t caught up to this yet and there’s a lack of founder-friendly funding alternatives to VC.

Here are some of the amazing companies and individuals who are trying to change that:

NOTE: I’m not suggesting that one type of startup is superior to another but that founders need to be presented with a fairer representation of viable options and a non ‘vc compatible’ startup is definitely one of those.

Samuel Wood is Growth Marketer and Chief Of Staff at Multiple London. Follow him on Twitter: @samuelw.