Thinking about making the jump to location independent work, either for yourself or your startup? Forget Asia -- Antigua Guatemala is where it's at.

I’ve been a digital nomad (or “slow traveler” or “location independent worker” or whichever buzzword you prefer) for over five years now. I quit my life in 2011 after the Great Recession meant there was no way out of my dead end job as a social worker and bought a one-way ticket to Argentina. Since then, I’ve lived in more than 20 countries, worked in coworking spaces, cafes, and on trains, planes, and — yes — automobiles. And everywhere I go, the one thing that people always ask me is “What’s your favorite place you’ve lived?”

My response is immediate: Guatemala. And, to be more specific, the colonial town of Antigua Guatemala.

Four things are important to digital nomads and bootstrapping startups:

3. The place is culturally interesting.

Antigua has all of those things, with a few added bonuses.

My arrival in Antigua Guatemala coincided almost exactly with the opening of The Impact Hub Antigua in October 2014 and before I even met any of the entrepreneurs, freelancers, and do-gooders who worked there, I was struck by how beautiful the building was. It’s a colonial Spanish mansion that opens up into a central courtyard, with views from the roof of the three volcanoes that surround Antigua. Orchids hang from the ceilings and the offices rooms have high ceilings with ancient-looking dark beams that keep the space consistently cool. It’s the most beautiful space I’ve ever had the pleasure to work in — and the community they’ve built is amazing too. 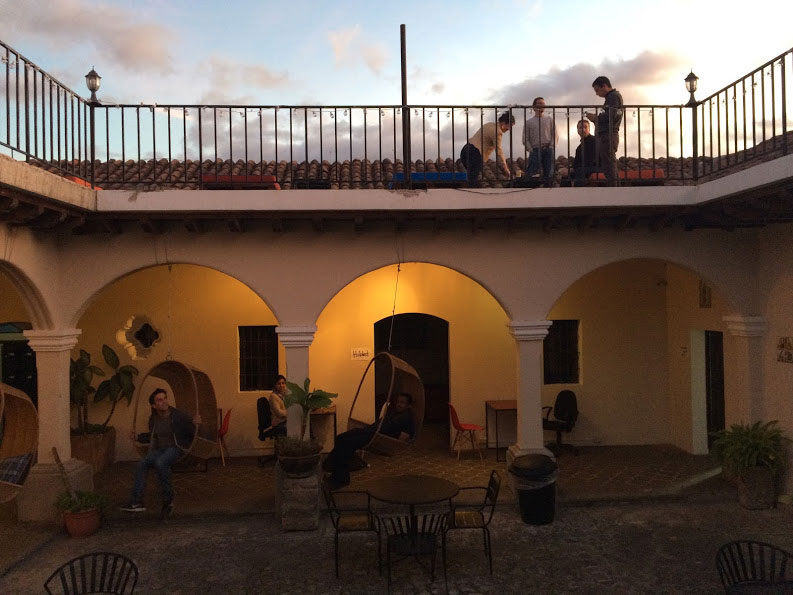 One of the hardest things I’ve found about being a location independent worker is how hard it can be to make friends in every new place you post up. But, at Impact Hub Antigua, you’ll find a vibrant community of people who are not only passionate about their work but down to organize trivia nights or trips out to Lake Atitlán for the weekend. They also have weekly in-house events, including a happy hour every Friday evening.

And when it comes to practical stuff, Impact Hub Antigua boasts that they have the best wifi in the city. It’s not as good as wifi in the States — and power outages are a reality in any developing nation — but it’s good enough for the Skype calls and file uploads that are so important to location independent workers. Oh, and you’re also in US time zones, a great advantage over other digital nomad hubs — like those in Asia, for example — if you work with companies back in the States.

Cost of living is often one of the first concerns for digital nomads and startup entrepreneurs, for a good reason: We’re taking risks with new income streams and need to have the space to do that without worrying about how we’re going to eat tomorrow. In Antigua, my boyfriend and I lived in a beautiful two-story apartment that had its own little atrium and a huge courtyard with flowers and fruit trees. The cost? $750 per month.

And that’s definitely on the higher end of what’s available. 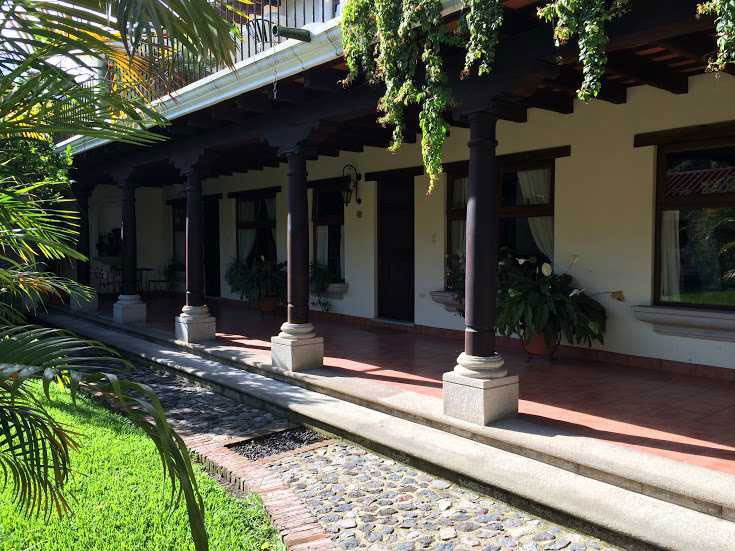 If you’re willing to bunk up with roommates or you’re planning on staying for longer than a few months, it’s possible to find a place in Antigua for just a couple hundred dollars per month. Friends of mine had rooms in shared houses for as little as $200 per month and private places for as low as $305.

When it comes to food, you can spend as little or as much as you want. There’s a massive municipal market (which is without a doubt one of my favorite places in town) where you can buy everything from dried goods to fresh fruits and vegetables to recently butchered meat at a fraction of the price you’d pay in a supermarket back home. If you’re not into cooking, there’s a range of restaurants available, starting with super cheap Guatemalan street food all the way up to fancy French restaurants that would hold their own in a major American city. 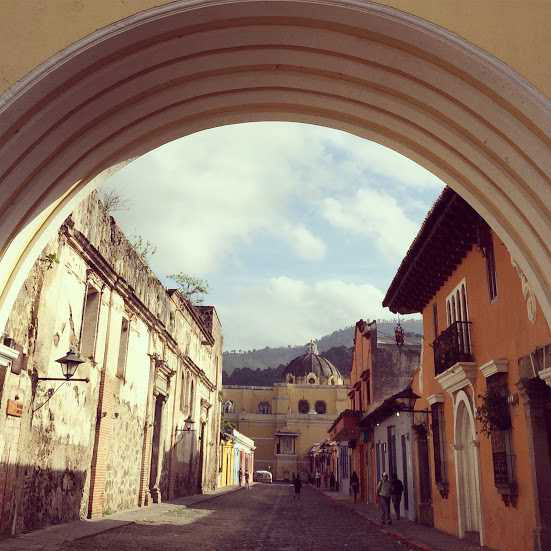 When we were looking for an apartment, I asked our realtor — who was a long time expat resident of Antigua — why she chose to live there. Her response? “I like feeling like I live in a painting.”

Antigua Guatemala is one of the most beautiful cities I’ve ever seen. It’s a UNESCO World Heritage Site, which means that the cobblestone streets are lined with low buildings painted different shades of yellow, blue, and red. You’ll find gorgeous ruins of cathedrals and monasteries that were taken down by earthquakes centuries ago scattered throughout the main grid of the city. Agua Volcano looms up just to the south of the city, while Acatenango flanks Fuego — an active volcano that puts on almost nightly fire shows — to the West. 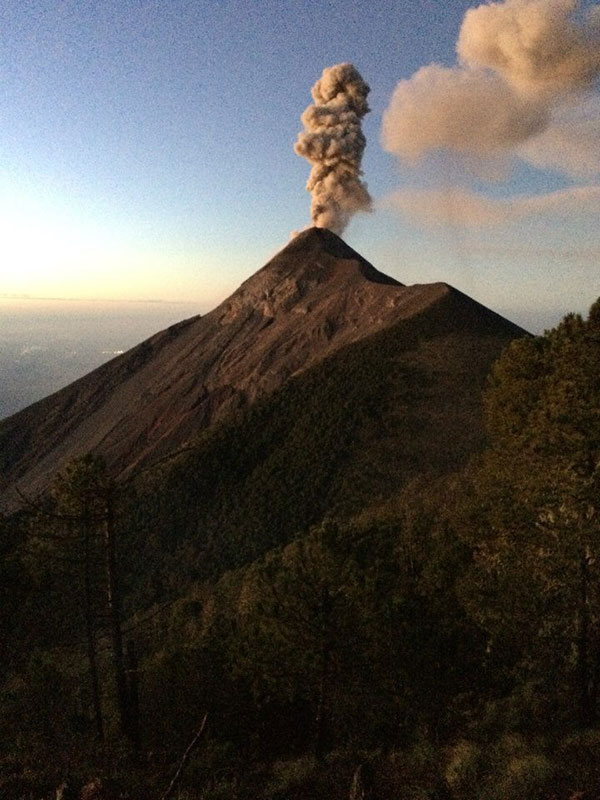 When you feel like getting out of Antigua, Guatemala offers some of the most stunning landscapes I’ve ever seen. My absolute favorite place is Lake Atitlan, which is about a three hour drive from Antigua. This deep, ancient lake is surrounded on all sides by steep volcanoes and hills, on which you’ll find tiny Mayan villages that are primarily accessed by boat. Grab a tourist shuttle from Antigua (cost: $12), hop off in the port town of Panajachel, grab one of the blue lanchas, and head out to whichever town you choose. My personal favorite is San Marcos, which is half Mayan and half hippie gringo. Go there and try to not be enchanted by its winding, car-free pathways and nature hikes. 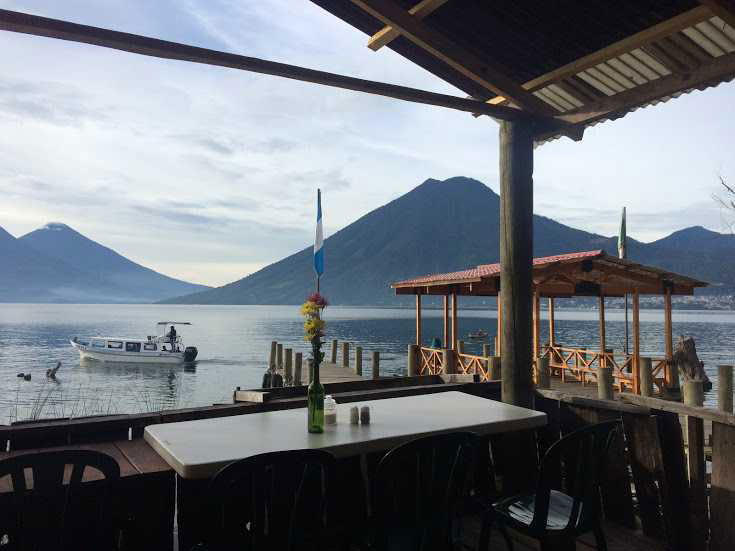 If you’re willing to travel a bit further (as in, a pretty rough eight-hour shuttle ride), Semuc Champey shouldn’t be missed. I’ve tried time and time again to describe what makes Semuc so incredible and the best I can come with is it looks like I imagine the Amazon looks, but minus all the things that can kill you. The main attraction is a series of steppes and waterfalls, filled with brilliant turquoise water. You can swim, tube down the river, or jump from massive rope swings or from the (very dangerous looking) bridge. But don’t miss the cave tour, where your Mayan guide will hand you a candle that you have to keep lit — sometimes holding it in your mouth when you have to swim through caverns — as you climb rickety metal ladders and go deep into the side of the mountain.

But one of my personal absolute favorite things about Guatemala can be found in Antigua, at the lake, or even in the capital city. Mayan women have a textile tradition that is completely breathtaking; they spend months making one shirt and wear their clothing with so much pride. While the landscapes of this country are gorgeous, it’s really the Mayan women who make Guatemala outstanding. 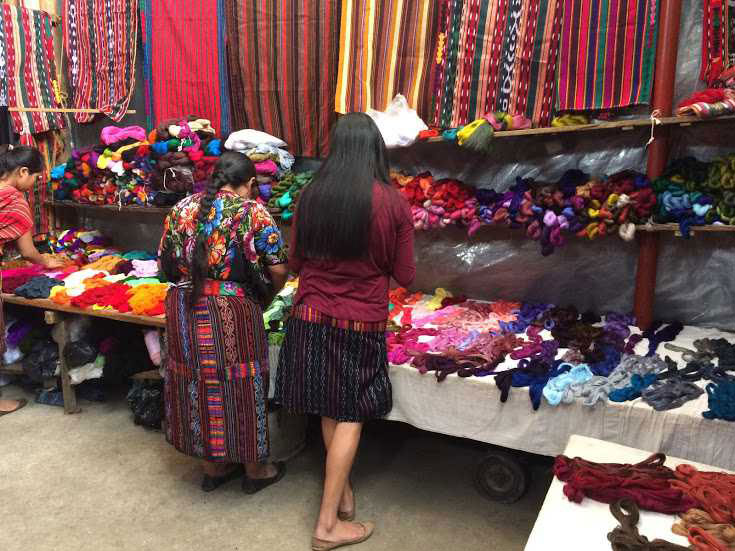 There Are A Couple Of Downsides

Of course, there are a few downsides to digital nomad life in Antigua Guatemala.  The primary one is wifi connection, which can be shaky — especially in people’s houses, but even in the Hub or in one of the many coffee shops that offer free wifi with a purchase. The other is that petty theft is pretty common, with pickpocketing and bag snatching being the primary kinds of crime you’ll encounter there.  But anyone who has lived in a developing country knows that watching your stuff is essential regardless of where you live. It’s certainly not special to Antigua.

But everything else I’ve outlined here? That’s all special to Antigua. Whether you’re a bootstrapping founder or a digital nomad, I can’t recommend Antigua Guatemala enough.