How To Write The Best Business Problem Statement

Your problem statement is the heart of your startup idea. It’s what intrigues people about the rest of your business and ultimately becomes the focal point for everything you build.

Your business plan needs a problem statement, because every great company starts by solving an important problem. The more accurately you articulate the problem, the more valuable the solution will be.

A common founder faux pas is overlooking the importance of giving the problem more weight than the solution. Founders get so excited about their solution that they forget to explain why the problem is so important. A well-articulated problem makes the value of your solution and your entire plan 10x more effective. 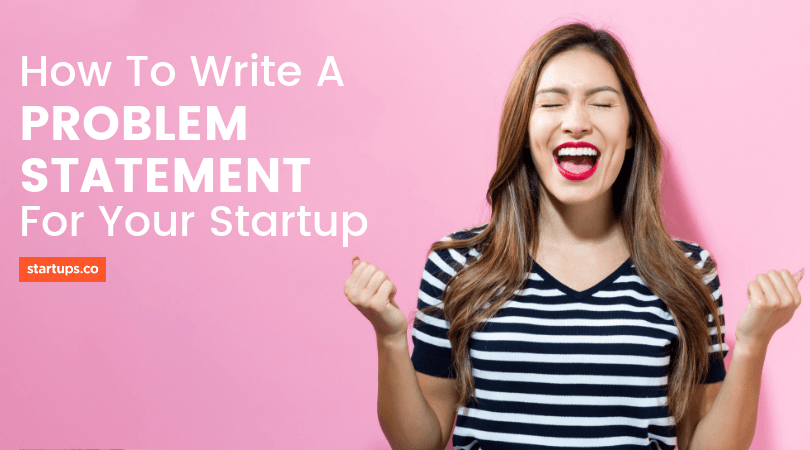 In many ways, the problem statement is the heart of your concept. It’s what intrigues people about the rest of your business and ultimately becomes the focal point for everything you build. Building a great case for your problem isn’t just about stating the problem, it’s about building an engaging story around that problem that people can empathize with personally.

Let’s use the example of Netflix, who initially solved the problem people had while having to travel to the video store to rent a movie. Netflix sought to avoid video stores altogether and instead deliver movies in an envelope to your mailbox, allowing you to keep the movie as long as you’d like.

At the time, the Netflix problem statement would probably look like this:

“Going to the video store is a pain. People don’t like traveling back and forth just to rent a movie and they hate paying late fees even more.”

That’s a pretty simple problem statement, and it’s accurate. Notice that it doesn’t include any reference to the solution. We’ll get to that later. A good problem statement focuses entirely on the problem so that the audience can build a powerful case for that problem.

A great problem statement has a lot more character to it. It tells more of a story, and provides an emotional connection to the solution. Building a better story takes more effort, but the payoff is real because you can draw your audience into your world and get them excited about your journey.

There’s a good chance that your product solves multiple problems, and that’s wonderful. Right now, however, it’s time to lead with just one of them – the biggest problem you solve.

Investor Insight: “I have to see hundreds of pitches this month and I can barely remember one from the other. I need to focus on one single problem that a startup solves that I believe strongly in. I can’t possibly remember any more.”

There are two important reasons for this.

Investors don’t have time to remember every detail of your pitch. Can you remember the last time you spent an hour watching a TV show and remembered every line of dialogue? You need to focus on the highlights and save the details for pointed questions later.

One problem needs to succeed

If your biggest problem isn’t compelling, it stands to reason that the second biggest problem you tackle isn’t going to save you. You don’t win on the number of problems you solve; you win on how well you solve a particular problem.

In the example of Netflix, we know that movie delivery solves lots of problems – convenience, movie selection, and cost effectiveness – among others. Yet some are more important than others. If Netflix was far cheaper than its rivals, but less convenient, you could argue that it would fail. Therefore, Netflix needs to be cheaper, but more importantly it must be more convenient. We then realize that “convenience” will be our lead problem.

This doesn’t mean we will ignore the other problems. We can certainly cite those as well, but we want to tighten our focus initially so that we can talk about this problem first, build a story around it, and then dig into related problems to solve later.

Step 2: Pump up the pain

Not all problems are created equal. The value of a problem is proportionate to how painful that problem is. The more painful the problem, the more powerful the solution.

You don’t have to be addressing a life-threatening problem to make it powerful. You need to focus on the detail of the pain in your problem. Even “convenience” can be presented very differently if it isn’t given enough character.

Compare these two versions of the same problem:

Both statements have the same intent, but the second one details the pain. You don’t want to hope your audience will remember what fighting traffic was like – you want to tell them. You want to remind them of the nuances that make “going to the video store” such a miserable experience.

As emotional beings, we attach to things we can relate to personally. The vision for your product is no different. The more your audience can relate to your story, the better they will understand it and want to connect to it.

There are a handful of ways that founders tend to build a relatable story.

You’ve seen this in popular “explainer videos” where the story opens with “This is Jim. He loves watching movies but hates having to travel back and forth to the video store every week.” Startups use this to give their audiences a persona to connect to which allows them to more easily relate that to their own experiences.

Some problems are universal, such as a common frustration people have in everyday life. In the case of Netflix, the frustration of movie rentals was something almost everyone could relate to. They could open with “Aren’t you tired of having to travel back and forth to the video store every time you want to watch a movie?” Chances are their audience has dealt with this. It’s a bit of a gamble, so be mindful of assuming your audience shares your problem.

Any of these approaches can be used to create a story around your problem if they naturally work. If there’s nothing particularly relatable about your product or story (it may just be too specific), don’t torture it. These techniques can help communicate your problem more effectively, but they aren’t an absolute requirement.

Now that you have a sense for how to pick your problem, focus the pain, and build a story around it, we can construct our problem statement in a very deliberate manner:

We determined that convenience was the biggest problem we were going to solve. While other problems like cost and selection were interesting, if consumers didn’t think Netflix was more convenient, they just wouldn’t use it.

It’s not just going to the video store that’s a pain, it’s all the frustration involved in making that journey. We dug into just how painful the convenience problem is.

We then began to build a story around who feels that pain and how it was something our audience could relate to.

Even though you know the elements of a good problem statement, it’s still possible to articulate this poorly. Just assume the first 20 times you pitch this problem (maybe a lot more!) you’re going to refine it. Don’t try to get the definitive version right out of the gates. It’s nearly impossible.

Here’s a horrible way to articulate the problem:

“The video rental industry has a categorically broken distribution model when delivery video-based content to consumers.”

Is that true? Yes. Is it relatable? Not at all!

Remember that facts alone are not a compelling narrative. A good problem statement isn’t just correct — it’s compelling. It pulls the audience in and gets them fired up.

Compare this to the version we developed earlier where we detailed the pain more acutely:

“Going to the video store requires fighting traffic, wandering the aisles and waiting in long lines just to get a single movie.”

If we really wanted to get creative we could try to build a story behind who is frustrated by using a character or a relatable scenario as well. This is helpful, but not a requirement. If it doesn’t feel like adding a character tells the story better, leave it out. Less is always more if it gets the job done.

The goal of the problem statement is not only to garner the attention of your audience, it also serves to make the solution look amazing. Next we are going to dig into the solution, but mind you we’ll be tweaking each element – problem, solution and market size – as we go. Iteration is our friend here!

Once you’ve articulated the problem, your next step is to think about how your solution fixes that problem beautifully. This requires just as much effort to keep the answer short and punchy as the problem statement.

Many founders assume that their audiences already understand why a product is important. They want to rush into their demo. Take a moment to make sure your audience understands the value of your solution before you crack open your laptop and start your demo!  Sell the trick, then perform it!

Connect directly to the problem

Your problem statement should set the stage for your solution to shine. In the case of Netflix, we did a nice job of explaining how painfully inconvenient going to a video store is.

We want our solution statement to connect directly to that problem – before we get into any other part of the solution. In the case of Netflix, our solution involves allowing anyone to watch movies streamed directly to their home or delivered to their mailbox (in case you forgot, Netflix also delivers DVDs!)

Problem:  “Going to the video store requires fighting traffic, wandering the aisles, and waiting in long lines just to get a single movie.”

Solution: “Netflix allows anyone to enjoy thousands of titles streamed directly to their home or delivered to their mailbox.”

What’s important here is what we’re not including. We’re not talking about the cost savings or the ability to get streamed content on multiple devices. That’s because we want to hook the audience in with our strongest value proposition from the start.