Why We Don’t Pay Sick Time. The Three Truths of “Calling Out Sick”.

Why my company doesn't pay sick time and the impact calling off sick it can have on the team.

I know this blog post is going to get some electronic tomatoes thrown in my direction….. Meh… *cue shoulder shrug*. That said, here comes the first leadership truth: 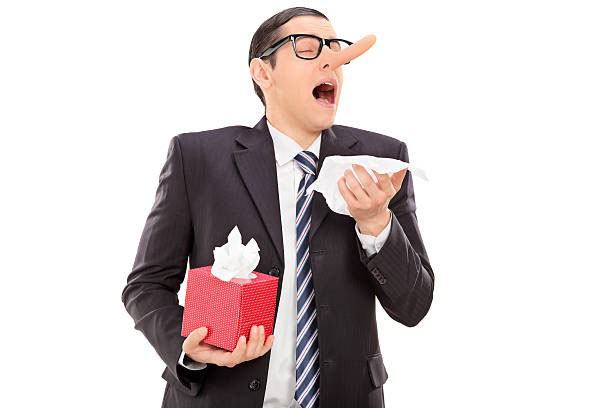 1. You look bad when you chronically call out sick.

When we were a company of 10 people, no one ever called out sick. I even had a policy at the time where I paid for sick days that no one took advantage of. For real, never — It was just never an issue for almost two years. I then upboarded my first manager and that single move of one level separation between me as the owner and the employees created an environment where we had people calling out sick left and right. I think it was some sense of “Oh, well now it is a “company” and not just a person I am loyal to”. That sense of entitlement did not end well. I had a manager finally break down in tears because she couldn’t get her job done as she was pulled into the direct line work every day because of the excessive “call outs”. It was then that I decided to make our policy that we still use today:

No paid time for unplanned absences. 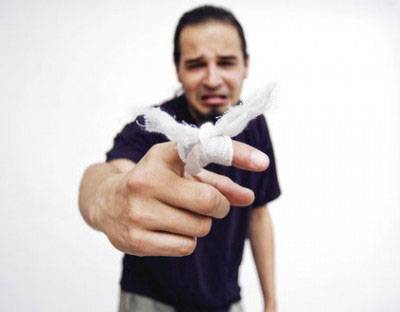 What happened when I instituted this policy? It was like a miracle from the heavens above: People stopped being sick. It is so rare that we have someone call in sick that when it happens we all look at each other in a state of confusion. Really? Why? There must be something REALLY wrong. When you make a policy, you have to stand behind it. For me, this is the only way that I can truly feel a sense of sympathy for someone that calls out. I assume they are being honest because who in their right mind would miss an entire day’s paycheck unless they were really sick? They must be TRULY sick to do something like that. If I feel sympathy, I am more willing to make an exception for a situation that truly is awful (see last bullet point below) where someone IS sick.

Due to this effective policy, one has to ask….Was anyone REALLY sick before the policy? I’m sure there was about a 3% true sick rate. Yes, for the person who really does wake up with a freak stomach bug, this policy really sucks. Yet, I will argue that this happens very infrequently….So infrequently, in fact, that this policy is worth it for the decreased day-to-day hassle of the large majority of situations where someone is not really sick. There were also a lot of cough and wink situations happening. One person even called out for a “mental health day” when they knew we were drastically under-staffed. Just to be clear, that is a surefire way to get your manager to hate you. That was the icing on the cake for me…… Are you serious? You thought your need for yoga and a nap was more important than everyone else on the team that just had to work 10x as hard in a complete panic because you decided you needed some “me time”? Get out of here with that shit.

Ok, here is the deal: “Calling out sick” may fly when you work as a data entry person at a 10,000 person company and you have a checked out manager. Why? Because nobody cares if you are there. Doesn’t feel like a very warm and fuzzy policy now, does it? You know why that company has a “We will pay for 200 hours of sick time every year” kind of policy? Because they don’t need you to show up. They are using the policy as a way to retain people that are just looking for a paycheck.

This policy does not work in a small business where everyBODY is necessary and crucial to the operations. I don’t have anyone employed that isn’t critical to the success of the business. It hurts everyone else when someone calls out unexpectedly and that then hurts team morale and team performance. Further, we work with people with developmental disabilities that depend on routine and structure for success. It can put an entire day into a tailspin when someone chooses not to follow their schedule — honestly, it can be downright dangerous. The ripple effect of ONE person calling out can be massive costs and excessive time wasted. It creates resentment from peers and from the leadership team and all the managers that are reading this right now shaking their head and thinking “Yes, it really sucks when people call out unnecessarily and I can’t get my job done as a result”. 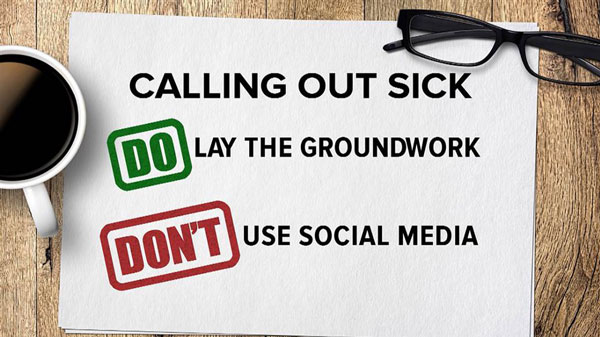 2. Awesome employees don’t call out sick when they have a cold.

Why? Because they are so busy being awesome that they don’t have time for that kind of drama…..and they definitely do NOT dramatize their ailments. 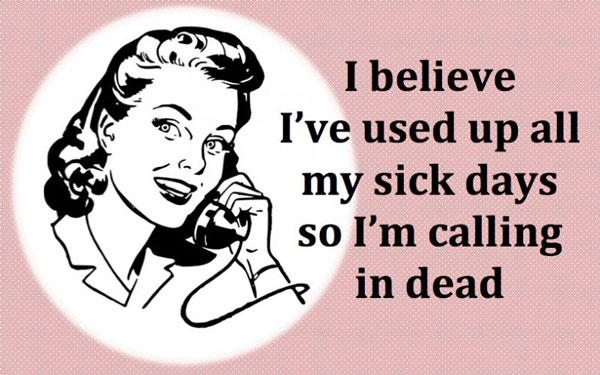 Are they evolutionarily superior? No. They get colds and have problems just like everyone else. The difference is that they just suck it up and get to work. Guess how many times I “called out sick” when I was an employee? I seriously can’t recall a single time. I was the one that picked up extra shifts and worked holidays for double pay. I took a week off of work when my mother unexpectedly died and then I pulled myself together and got back in the game. I left my job with over 200 hours of unused sick time when I went to start my own company and no, I wasn’t paid out for them. Could I have milked the system and used my 200 hours with a cough and wink just to quit with two weeks notice? Yes….but I’m not an asshole. I cared about what I was doing and was willing to see my work through instead of taking a “me” day just because I could. I have more integrity than that and I wasn’t going to abuse my company’s policy even if I was given the opportunity to do so.

The reality is that we all have “issues”. We all have something that we could make into a “thing” every day of our lives. I have chronic pain in my right shoulder from an injury in high school. I have daily pain in my tailbone from it breaking during my first child’s birth (ouch). I get chronic headaches and blurry vision from staring at a computer screen. I have frequent colds seeing as I live in a petri dish of germs from my beautiful three kids. I run a fever at least once a quarter due to said petri dish.

Do I call out sick when any of these ailments arise? No. I get out my kleenex and take some tylenol and get back to work. 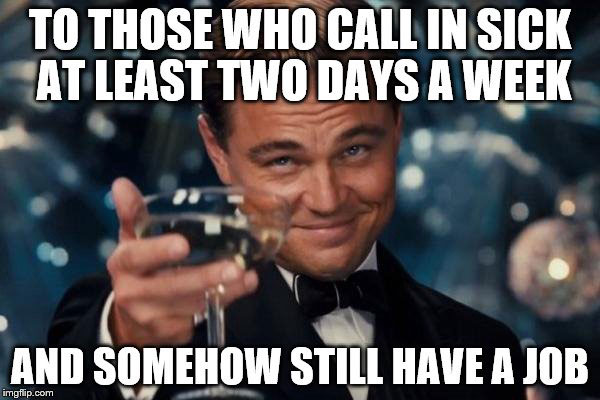 3. Your frequent absences make you look like an unstable liability to your employer.

(Give me a second to wipe my screen from the excessive e-tomatoes). This is one that people need to know, whether they agree or not. If someone is constantly calling out it makes the employer think: 1) They hate their job. 2) They are using drugs. 3) They hate their job AND are using drugs. 4) They are a slacker. 5) They can’t handle the pressure of the job and aren’t a right fit. 6) They have another part-time job that they are doing on the side and this job isn’t their priority. 7) They don’t have enough coping skills to successfully maneuver the stressors of life.

Now, there are lots of people that will make this into a work/life balance issue (mean #girlboss….hisssssssss…..booooo) — but let’s call it what it is….It is me as the employer simply saying “Don’t be a Jerk” or maybe “Don’t be an Idiot” by calling out sick every time your toe hurts. It makes you look like an asshole. Assholes don’t stay employed very long….so you call me what you want, but don’t call out sick every week if you want to keep your job. 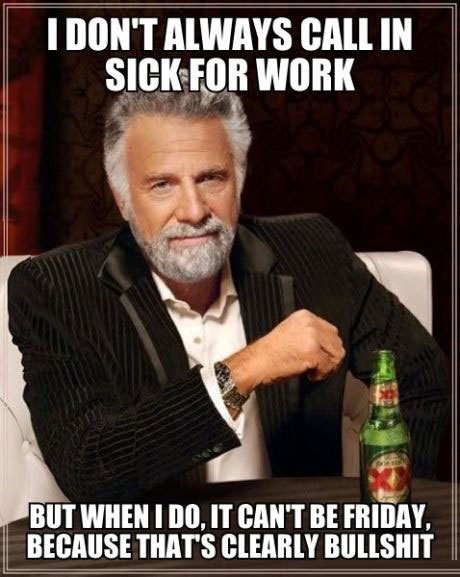 MY truth? I want my teams to be healthy and happy. Thus, we offer a lot of proactive benefits and paid time off for those that use it appropriately:

What do we NOT pay for? Someone that has the sniffles and decides it may just be “too much” to make it in for the day. For those situations, I want it to be a real thought process of Is it worth it for me to not get paid if I don’t come in? 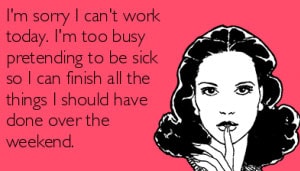 You are part of a team that depends on you to come into work. You are needed and cared about. Oh, did I mention that you are needed? That should feel good….so good in fact that you should want to show up for work. Every Day.

I’ll see you at the office. I’ll even keep kleenex at my desk if you need it.