The Myth of Job Security

If a job can be lost at any time because of external factors, why not work instead on something you actually care about?

At school we were taught that the key to success is a graduate degree and a steady job at an established company. Yet over the past decade we have seen many major companies collapse, and during the recession that began in 2008 many millions lost their jobs just in the United States. Many had graduate degrees. People began to realize that their lives and security depend solely on themselves, and that job security is often a hollow promise. This raised the question: if a job can be lost at any time because of external factors, why not work instead on something you actually care about?

Working in a corporate cubicle on something that does not really correlate with your values did not seem so appealing anymore. Employers have often misinterpreted this as Millennial “laziness” or “bad work ethics”, instead of acknowledging the rise of an entrepreneurial generation. Today, people want to make a difference. And since the myth of a secure corporate job was busted with the Great Recession, the forces holding back that desire were busted, too.

Goodbye to the Nine-to-Five

Cracking the secure corporate job myth also raised the question: what is a job anyway? For over a century the concept of a job had been defined by an address and time spent in a certain building. This made sense at the time, as a factory assembly line required rigid work conditions. But today, clocking in and clocking out is not how things get done. 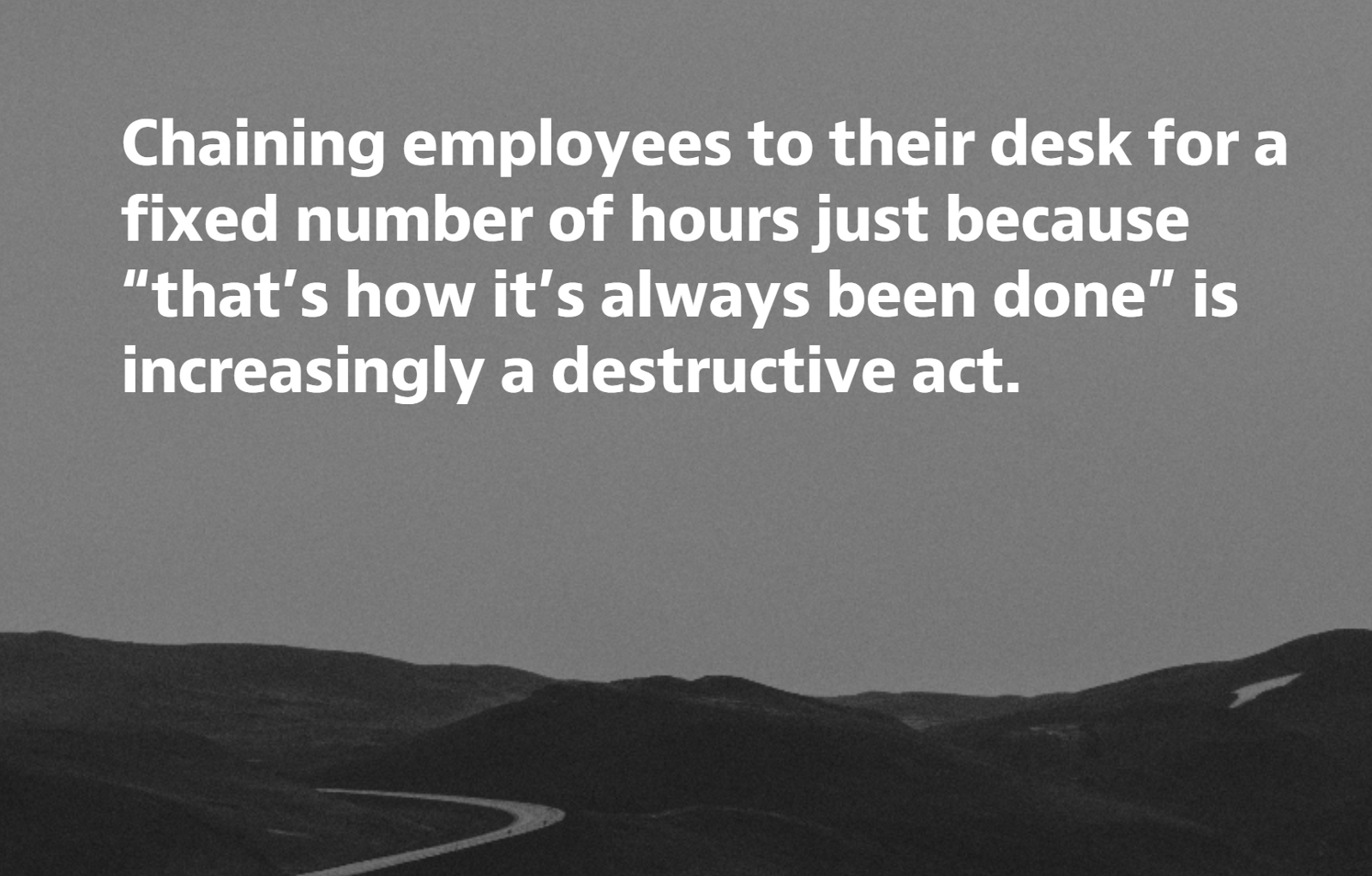 The Freelancers Union estimates that by 2020, more than half the US workforce will be freelancers — that’s almost 50 percent higher than today. This means that a majority of the workforce will be choosing higher career paths as solopreneurs, where the bread on the table is earned in direct correlation with value created.

That does not mean full-time positions will disappear. But the overall team set-up is changing, and chaining employees to their desk for a fixed number of hours just because “that’s how it’s always been done” is increasingly a destructive act. As the author Jacob Morgan said in his book, “When it comes to the future of work, ‘late adopters’ are the same as ‘out of business’.”

The World is Your Oyster

Mark Twain famously said: “Make your mark in New York and you are a made man.” Indeed, the path of a successful person has been directly connected to their choice of location. Life was what happened in London, NYC, or a few other metropolises. The initial discomforts — high cost of living, long commutes, bad weather, etc. — were inevitabilities that one accepted in order to follow the dotted line towards success. 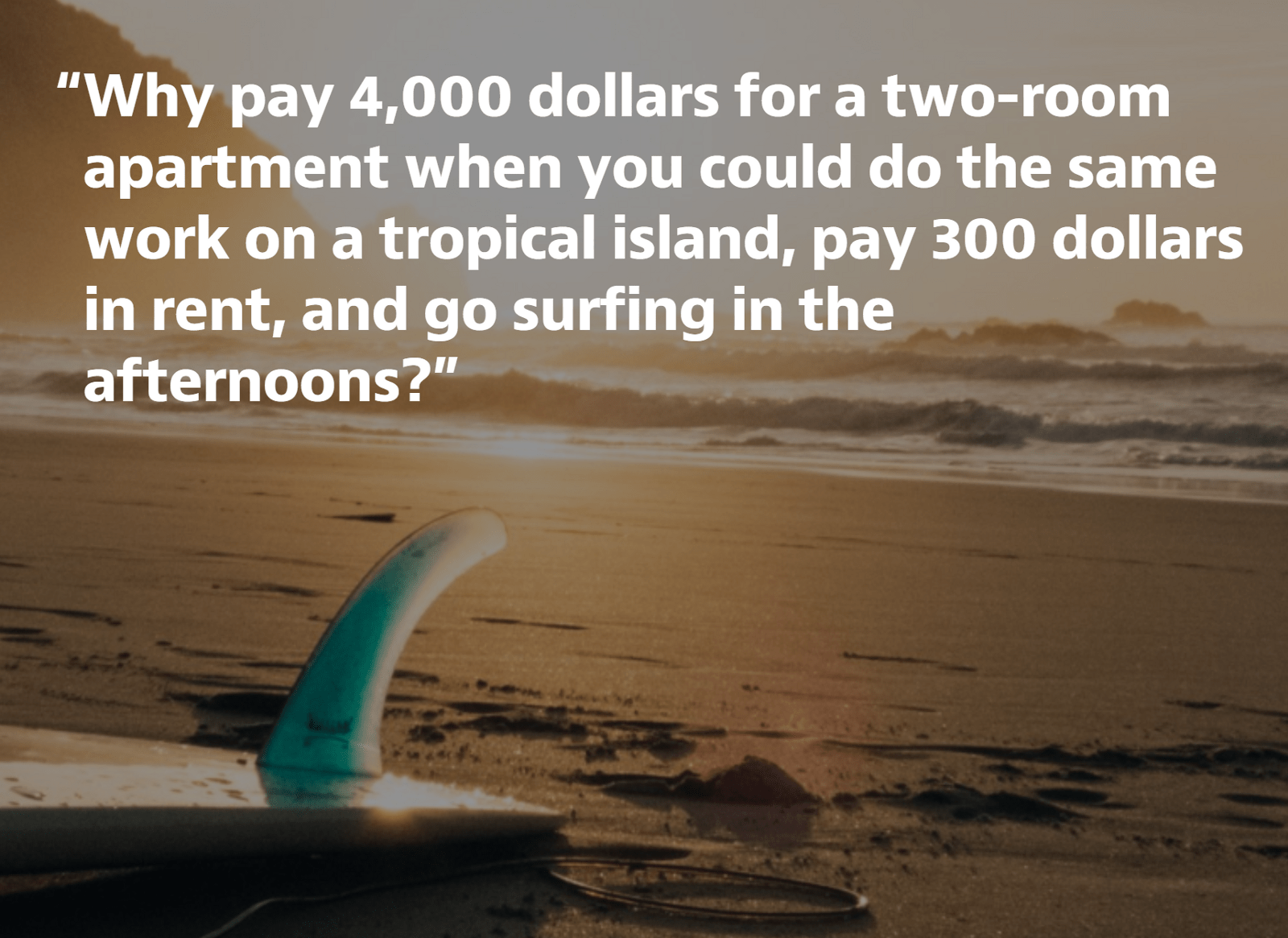 But then work evolved into a series of tasks that can be completed almost anywhere on the planet. The workplace became less dependent on time and location. Would you really choose to spend as many as 3–4 hours on a grueling commute each day if the work can simply be done from home?

As the workplace becomes less dependent on geography, a new era of living and travel is beginning. Why pay 4,000 dollars for a two-room apartment when you could do the same work on a tropical island, pay 300 dollars in rent, and go surfing in the afternoons? Why not move to a society where healthcare is free and the state gives young parents almost two years of fully paid maternity or paternity leave? Suddenly it is the faraway countries that have a chance to emerge–the hidden gems, the societies making it easy for talent to step in and establish their lives.

Now, looking back fifteen years to the beginning of my somewhat lonely journey in my little corner of the Earth, it is interesting to see how things have changed. The American Dream is shifting into a Global Dream. Ernst & Young’s “Megatrends 2015” research concluded, “The gulf between “mature” and “rapid-growth” countries continues to shrink. A new tier of emerging nations, driven by their own nascent middle classes, will draw global attention.” 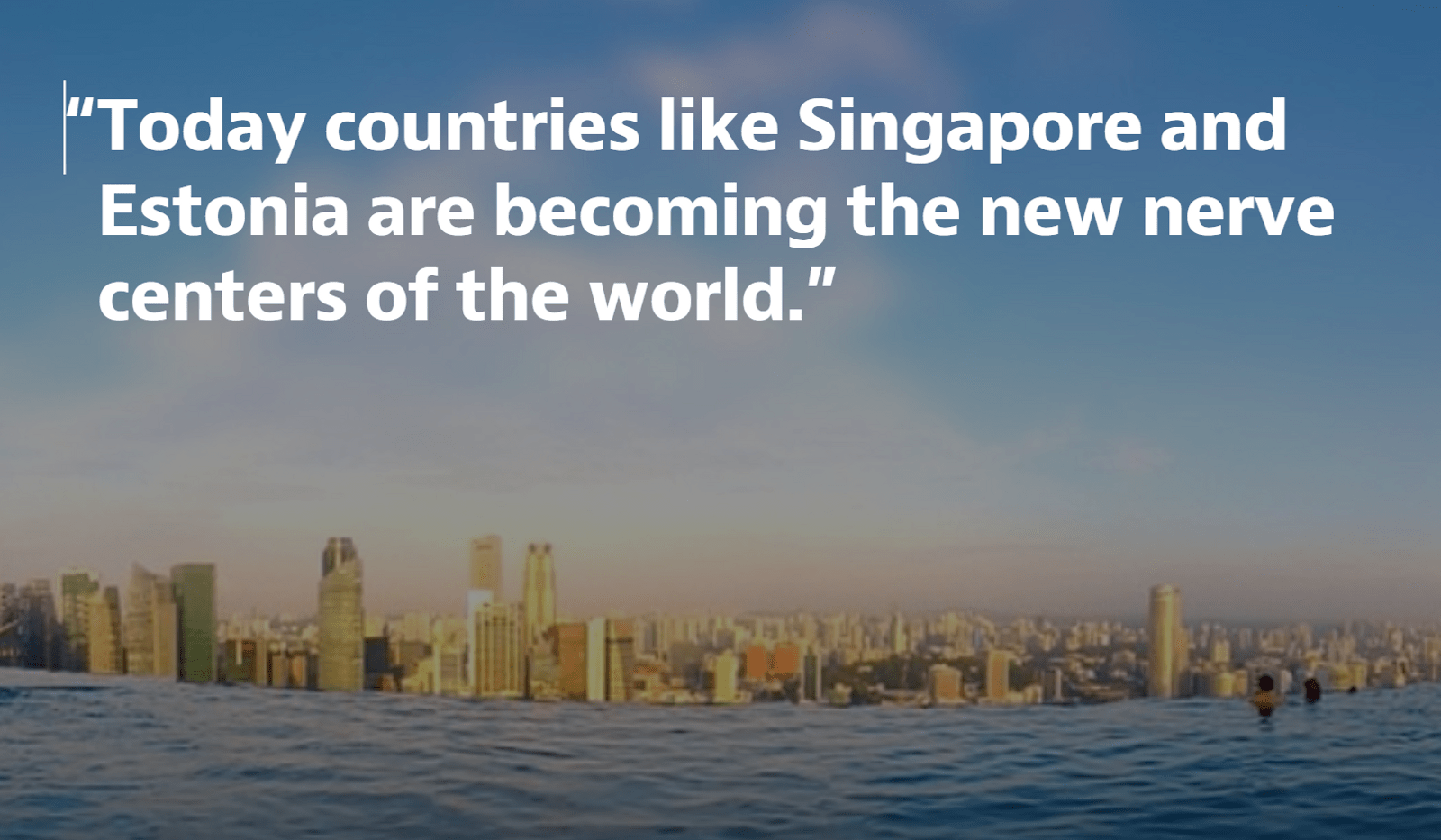 Today countries like Singapore and Estonia are becoming the new nerve centers of the world. Why? These are countries where the simplicity of blending in, being a citizen and cost of living are in greater balance. These countries have adopted the startup mindset and listen to their “potential customers”, meaning that getting a work permit takes less time than ordering a lunch, and declaring your taxes is as quick and painless as a sneeze.

That is why I founded Jobbatical — a platform that leads people and their career journeys to the undiscovered locations, where the ease of living and ambitious local teams can help global talent develop their potential in a different culture. Doing that also helps local entrepreneurs get access to knowhow and expertise that was previously restricted to a few metropolis. The company I run is specifically designed to facilitate the further growth of the new work environment, benefitting both employees and entrepreneurs around the world.

Today my schoolmates from America ask me: “Could you organize a jobbatical for me in Estonia?” The hidden tracks and special journeys are replacing the good old 9-to-5. As the poet Robert Frost would say, I took the road less traveled by. Glad to see more people on that road now.

Karoli is the founder of Jobbatical – a marketplace for international career adventures. She founded her first company at the age of sixteen (officially becoming the youngest inventor of Estonia). Karoli successfully lead the launch of seven television channels in Northern Europe (including National Geographic Channels, MTV, and Fox entertainment). She was named one of the 20 most promising young entrepreneurs under 25 in Europe by the prestigious international business magazine BusinessWeek. She is also an alumnus of Singularity University.