The Most Ambitious Startups practice Anti-Lean? On the Contrary…

Lean Startup is critical for Moonshots too. NASA proved it 50 years ago. Literally.

I read a popular article recently arguing why anti-lean startups are back because lean isn’t a…viable…way for ambitious startups tackling new domains, like artificial intelligence, to take moonshots.

As a practitioner of lean startup achieving high growth in Fin-Tech, I’m intrigued with counter-arguments to the methodology.

The article states getting paying customers is an anti-lean advantage:

“Anti-lean ventures, which have what lean startups sometimes lack, customers willing to pay for them. This fact alone upends the usual freemium model!”

Actually, points can be made that lean startups are particularly good with validating market (willingness to pay) risk.

Many lean startup experiment designs like ‘Wizard of Oz’ or ‘Concierge’ tests provide results to market demand learning goals AND get customers to pay even before building a product.

And freemium is a choice to prioritize user growth over immediate revenue. It hasn’t anything to do with following lean startup principles or not. While the result in number of IPO’s with freemium business models (and many more acquisitions) shows a validity to the growth approach…freemium companies aren’t necessarily lean and lean company’s certainly don’t have to use freemium.

product risk is hard for lean

“There is no notion of a buggy but usable v1.0 electric car; at the failure rate of a typical MVP, such a vehicle would harm thousands of people.”

Yeah, totally makes sense that a vehicle that harms thousands makes for a terrible MVP. It isn’t viable.

The dialogue of the moonshot startups claiming anti-lean tend to lend themselves not to market risk, but the immense technical (product) risks they face.

That’s a bit easier for x.ai since the market risks are validated by proxy because people have been concierge testing having a personal assistant for centuries. There is very little risk here.

But lean startup isn’t about getting customers to pay or being better at validating market than product assumptions.

Lean is the practice of identifying your riskiest assumptions, and (in)validating them with the least amount of resources as possible (time & money) in order to progress to a more certain successful outcome.

Nowhere in this is the practical tools or hard definitions of the amount of time or resources an MVP should be. These stereotypes are results of techniques that work well for internet startups. Different lean startup techniques & definitions are needed for different business models. Lean’s methodology must be adapted to it’s constraints.

I bet we’d agree the enemy is spending our precious time and money on degrees of uncertainty that’s unnecessary when there’s a less risky and faster path towards realizing (or discontinuing) the vision.

The point of lean is asking the right questions and designing the right experiments to answer them, with as little resources and the highest degree of confidence that creates progress on a vision. It is a most difficult and uniquely human skill. They are the foundation tenants of Lean Startup. Of Science.

Which takes us back to the core of the articles argument “There’s nothing wrong with lean but when you’re pushing the boundaries of science, it fails miserably.”
Really though? Let me introduce NASA’s Apollo venture as written up (in this ‘updated’) July 21, 1969 in the New York Times. 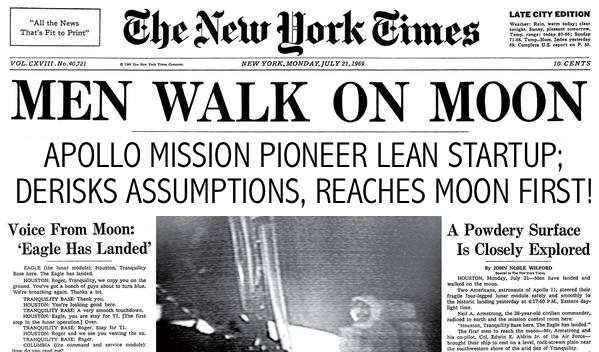 Phew. ~35 Launch MVPs, countless others on the ground—and there you have a lean moonshot. Literally.

It wasn’t cheap in time or in money, but it was iterative.

“Not everything can be solved in 3 months.”

So True. But with lean principles, NASA was able to increase their velocity of learning, run separate MVPs, minimize risk and beat Soviets to a moon landing before the decade was out. Coming from behind.

The Russians with their ‘anti-lean’ approach? Well they might have glanced over a risky assumption or two…

Ultimately the Russians went 0 for 4 with N1 launches, never making the N1 successful. 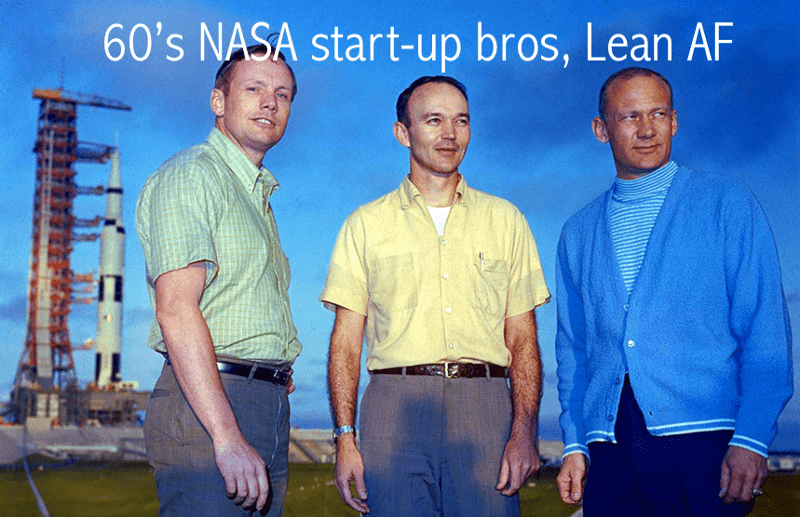 Was there ever a time where de-risking with speed and efficient use of available resources was more relevant than the space race?!

The literal moonshots proved the viability of the underlying theories of lean in technology decades ago. Ambitious visions of AI and other categories of moonshot startups are fantastic. But the credit for our progress, and the products of tomorrow, will continue to build on these foundations.

Director of Product @CreditSesame. Misophonia Empowerer. Wondrous of the world around me. Someone said Fear Means Go.