At Startups.co we talk to thousands of founders, many of whom are weighing the benefits of convertible debt versus equity. If you’re not sure what convertible debt is, check out these posts:

Since equity and convertible debt are the most common methods for raising early stage startup funding, it makes sense to examine them side by side so that you can understand the differences. Hopefully this will make your decision easier, so you can move on to the real fun of actually raising the money.

In order to get a handle on the decision we’re going to do three things:

Raising capital via a traditional equity structure has been the norm for quite some time. By comparison, the use of convertible debt by early stage startups is relatively new, so let’s start by exploring the differences between these two approaches.

These six common concerns highlight some of the most significant differences: 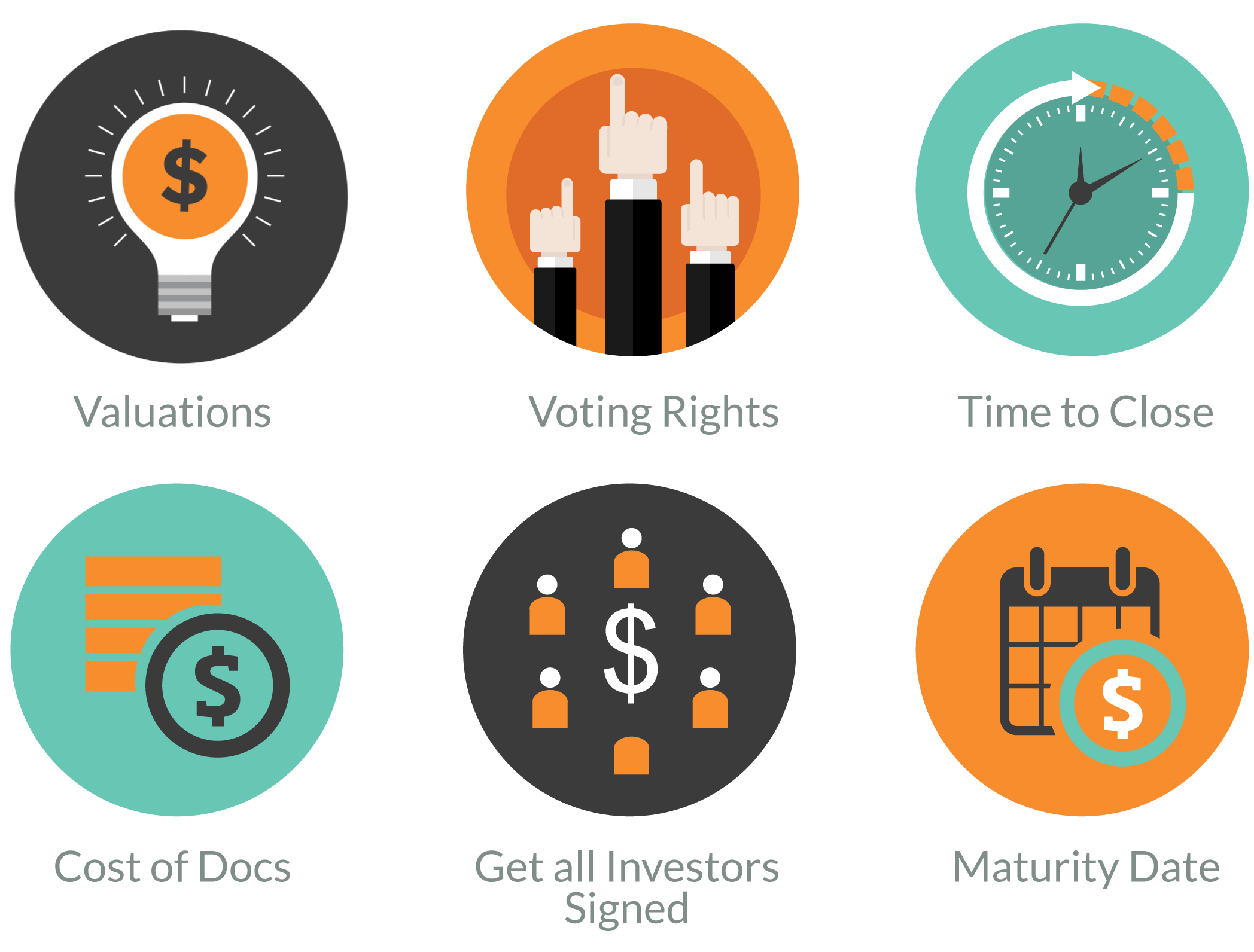 Valuation
With convertible debt, you don’t need to value or “price” the round. Equity, by contrast, requires a company valuation to determine what percentage of the company the investors will receive.

With convertible debt, you don’t need to value or “price” the round. Equity, by contrast, requires a company valuation to determine what percentage of the company the investors will receive.

Voting Rights (Control)
It’s no surprise that many founders are concerned about giving control of their company. Since convertible debt begins like a loan, it typically won’t include the key voting provisions that equity deals would. That’s primarily due to the fact that this is intended to be a temporary arrangement until a future equity deal gets done. At conversion, investors will most certainly expect those controls.

Time to close
In theory, a convertible debt note can be drafted and signed much more quickly because there are simply fewer terms for lawyers to argue about. That doesn’t necessarily account for the amount of time it might take for the investors themselves to get on board. A good attorney can get a convertible note drafted and closed within a few weeks, assuming investors (and their attorneys) don’t drag out the process unnecessarily.

Cost of Docs
For the same reason convertible debt can be faster, it can also be less expensive than equity fundraising: shorter, simpler documents are less expensive to have created by your legal counsel.  This is becoming less of a factor as more deals are done on what we’ll call standard-ish terms.

Get All Investors Signed
If you have multiple investors, this can be very important. A potentially critical difference between raising funds using equity or convertible debt is the flexibility each affords you as a founder.

Maturity Date
Convertible debt is basically a loan that comes due at some point – typically within 18-24 months. At that moment, if the company has not raised its next round of capital, which will typically convert the note to equity, it will become due.

Conversion in this case has some challenges. Remember, this is a loan. So that means it could convert into a debt obligation – which, in most cases, the startup cannot satisfy. Otherwise, it converts into equity at a valuation that may not be preferable to the startup. We cover this in more detail in the “Pitfalls” portion of this later on.

2.  How Investors Think About Convertible Debt

Sometimes the fundraising process seems murky and counterintuitive. It’s hard to understand why investors make the decisions that they do. For that reason, here’s some insight into how the investor thinks, so you can align with their goals.

Generally speaking, it’s in an investor’s best interest to do an equity deal that affords them a set valuation and assigns control provisions.

You can distill the investor’s concerns into two major buckets: valuation risk and control risk.

It’s fairly well understood that the sooner an investor puts money into your deal, the greater their risk. On the other hand, they could get a greater reward. Seems fair. The valuation issue gets challenging when you compare the valuation upside for equity versus convertible debt:

In a traditional equity deal, if an investor puts $1 million into your company at a $2 million valuation she gets 50% of the company. If the company grows to a $10 million value, she will get 5x the value of her money.

In a convertible debt deal, if an investor puts in $1 million into your deal and the company grows to $10 million in value, there’s no guarantee she will enjoy the same value appreciation. It’s determined by terms like the “cap” (we explained this earlier) but often leaves the investor with far less upside.

If an investor is taking on significant risk, they want the most reward possible. A convertible debt note basically says, “We’ll determine the value later – which could easily be a point where it’s worth far more than it is today and you’ll get far less of the company for the same amount of money.” You can understand why an investor would be less than thrilled about that.

Running a startup is hard, and stuff gets funky fast, which means investors will often need to invoke control provisions to make sure their interests are being served. But convertible debt provides investors little to no control over the company, which can cause some concern for the investor.

Investors may be willing to overlook this issue since convertible debt is usually issued at a stage when startups aren’t facing critical voting challenges. So the larger the amount invested, the more control an investor is going to want in their deal.

Other Investor Concerns About Convertible Debt

While valuation risk and control risk are the most prominent concerns an investor has around convertible debt, there are a few other more nuanced concerns that you should be aware of.

Early stage investors often create a lot of value in the form of introductions, social proof and advice. These “investments” often help quickly grow the value of the company which is in everyone’s best interest. But a convertible debt note doesn’t necessarily reward the investor for the increase in your valuation.

If you look at the previous example around “valuation risk” you’ll see that the investor could easily use their connections and influence to help grow the company’s value, but if in doing so she would actually get less of the company than if she did a standard equity deal, that’s a problem.

The only way to ensure your interests are aligned is to make sure both parties know what they stand to gain from the growth of the company to begin with. It’s not impossible to operate outside of this constraint, but you should be keenly aware of why it exists.

So Why Do Investors Ever Agree to Convertible Debt?

In short, investors agree to convertible debt because it’s often the most efficient way a deal can get done. Arguing about valuations, especially in early stage companies, is often a wasteful exercise for all parties. In some cases, if there is a lot of demand amongst investors to put money into the company, they will agree to convertible debt just to get into a hot deal.

3.  The Pitfalls of Using Convertible Debt

So far, convertible debt probably sounds like capital raising utopia. While it’s definitely more favorable to the entrepreneur than most equity structures, there are some critical aspects of the structure that can be a real challenge.

There are 3 areas of convertible debt that should concern you:

The Debt Matures and Becomes Due

A convertible note is just a loan that’s due in 18-24 months like any other loan. The intention isn’t really to collect on the debt but rather to convert the debt into equity when the time is right.

The problem is that the time isn’t always right. And when it’s not, you have a loan that’s due.

Unlike a personal debt like a car loan that has an asset of marketable value, a convertible note is backed by the startup, which may or may not have any marketable (read: can be sold right now) value at that time.

It can be the case that you are able to raise additional funds, and that a conversion does occur, but that it still works out poorly for the startup. If we revisit our example from Convertible Debt Simplified, where Uncle Earl did us a solid with a $50.00 convertible note, using a $500 cap and a 20% discount, we can see this in action. We didn’t price the round, but we did put a top limit on the price Earl would pay in the following round. If the round was priced at $1000, or $10,000, Earl would still convert at $500. Good for Earl, and good for you – you’re still limited to a 10% equity exposure with Earl. But what if we raise a round priced less than $500?

Given the rise in genetic testing at a global scale, many investors will insist on provisions that provide some sort of coverage during a zombie apocalypse.

These include making rights fully transferable in the case of death or their own “conversion” should their converted state be deemed by a majoring holding of the remaining fully humanoid investors to represent an undue risk, including but not limited to:

In the event that a majority of the Requisite Holders (more on what that means in our Anatomy of a Convertible Debt Raise) have been consumed or “converted,” the debt shall automatically convert at a rate agreed upon by the surviving note holders and the company, with the resultant equity created for the zombie investors to be liquidated and the proceeds spent on increased security and anti-viral stockpiling.

As always, be sure to consult proper legal counsel on all matter relating to Zombie, Nuclear, Genetic, or Godzilla-induced apocalyptic matters.

While there are many upsides to convertible debt for founders, there are also a few areas of concern. If you decide to go the route of convertible debt when raising capital for your company, be sure to consider the investor’s perspective as well as the potential outcomes of the deal.

Next we’ll be dissecting a convertible debt note, so you’ll be properly prepared when the time comes to inspect your own. In the meantime you can give us a shout out @startupsco if you want to take the conversation further!