We need people to continue to interrupt the interrupters! Challenging the thinking of the interrupters, improving on innovation is what has literally and figuratively built this great nation and in fact our entire world.

“If I had asked people what they wanted, they would have said faster horses.”
-Henry Ford

The greatest advances in life seem to come when someone interrupts the status quo and dares to challenge traditional thinking. 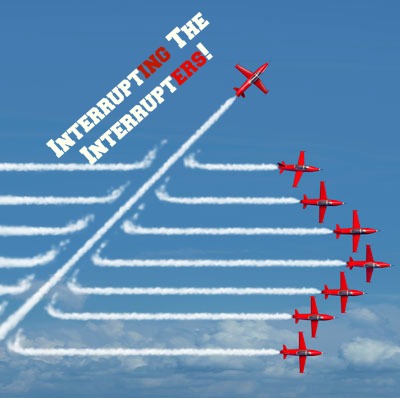 God bless those who dare to interrupt!

But sometimes, some of us entrepreneurial types watch those Interrupters and think to ourselves, “Hey! That interruption stopped short of its potential!”. We see the possibilities extending beyond the sight of the original Interrupter. We watch the disruption as it unfolds and make note of the many changes the disruption is triggering, always keeping our eye on the impact we think the disrupter has missed. If in time it becomes clear the Disrupter missed some opportunities or perhaps didn’t miss them but executed poorly, we see an opportunity. A glaring, obvious, opportunity!

As most would agree, there are very few original ideas in the world. Perhaps NONE. When an Interrupter shows up on scene with a radical new product, service or process that nobody has ever seen before, that does not necessarily make it an ‘original idea’. It simply means that person made it to market first. But it does not mean there weren’t others trailing right behind him or her thinking the exact same thing or perhaps even thinking something better.  (Remember that all you entrepreneurs! Someone is right behind you innovating as fast as possible!)

We need people to continue to interrupt the interrupters! Challenging the thinking of the interrupters, improving on innovation is what has literally and figuratively built this great nation and in fact our entire world.

I fancy myself somewhat of a mild-mannered Interrupter of sorts. In 1990, a friend and I interrupted the missing persons’ industry and the private investigation industry by forming International Locator. We built a global enterprise leveraging syndicated talk show appearances; hundreds of them.

Our success attracted several interruptions of our own business from startups challenging our thinking, copying us and our way of doing things. This forced us to reinvent ourselves to stay relevant.

In our sudden need to reinvent ourselves, I found a new business partner and we converted our non-technology driven company into somewhat of a tech company, renamed the company BigHugs and in short order, we were acquired by Ancestry.com. It was an exciting experience and helped me discover how much I love the process of interrupting industries and how grateful I was that somebody interrupted us.

Confessions Of An Interrupter

Netflix interrupted both the linear television industry and the cable TV industry with a single disruptive business model. They have single-handedly given rise to the greatest mass exodus of cable TV subscribers there has ever been. This unprecedented trend even earned its own name in the cable industry- “Cord Cutters”.

Full disclosure: I should point out I have been actively engaged in creating television content (powerful content by the way) for over 25 years. I’ve produced content for every major network in the U.S, nearly every syndicated talk show, morning news show, 24-hour cable channel, etc. I’ve been blessed to have starred in 3 unscripted hit TV series (WE, TNT, UP) and my Los Angeles production company, DunnDeal Studios is currently producing “more tv stuff”.

I LOVE Netflix. Like, really LOVE Netflix. They are the ultimate in Interrupters.  I was thrilled to see Netflix interrupt the stagnate television and cable industry. Their interruption has injected new life into both and their futures are being re-written. But (here is the confession) I feel like Netflix has not fulfilled the fullness of the opportunity. They have not been the anti-establishment solution so many of us content creators hoped for. They have not liberated us.

The liberation we seek is not from the TV networks or the cable companies. It is from YouTube! This behemoth has damaged the value of video content like nobody else. YouTube has stripped content creators of significant revenue opportunities, ownership, access to subscriber lists, ability to control advertising revenue, select sponsors, brand control, environment develop, etc… And YouTube has more rules and restrictions than the FCC! (Oh, if I had a voice in YouTube, how very different their direction would be).
We built a solution that allows ANY content creator to instantly launch their own ‘Netflix’-like business model within 5 minutes. It’s called Studios Network. The website is Studios.Network. Own the content, own the subscriber list and keep 90% of all subscriber and ad revenue. Content creators are lined up to launch their own TV networks on Studios Network. Will we grow it bigger? Will we get crushed or acquired by competitors? Who knows. But for the moment, we have successfully interrupted and are having SO MUCH FUN doing it.

Let me rephrase that line above. I am not the original interrupter in this situation. A very gifted 19-year-old young man named Jens Peterson is. He and I became friends a little over a year earlier through my Studios Network project.

Jens was 17 when we first spoke and I was intrigued by the way he thinks and excited by how big he dreams. Although we are a few years apart in age (ok, more than a few!) I felt like I had met a real friend. An equal.

Fast forward a year or so and Jens tells me about his decision to be an interrupter. Specifically, he felt like social media was now being run by corporate America, has become infested with parents and grandparents and was too fragmented. He developed a solution. ZuGo.

I loved it! I loved the app of course, but what I really loved was Jen’s deep belief that it was time for an interruption of the socil media interrupters! I was flattered he asked for my help and within days we had formally partnered and are now in the process of a quiet but steady interruption. The response has been fantastic and while we only have the IOS (iPhone) version available now, the Android version is right behind it.

Both above-mentioned interruption projects were started on a shoestring budget, are debt free and are already triggering conversations with VC firms and interested investors. And best of all, Jens and I are having so much fun!  I do hope you will watch both as we go forward. And if you think you have something to contribute to either project, reach out to us.

Your Take-Aways, If You Choose

I guess I can boil this lengthy article down to three truths:

Don’t wait to be invited into the game! Interrupt it! Take yourself off the bench and run out onto the field! Jump into our huddle or start your own! But get in the game! The clock is ticking down on your life. Nobody has ever created a legacy or changed the world sitting on the bench!

This article was also shared on LinkedIn.

Hi, my name is Troy Dunn, but to millions of loyal TV fans, I'm "The Locator". In my early 20's, I founded a global people-finder tech company which was eventually acquired by Ancestry.com. I continue my work in television with my production company, DunnDeal Studios and I am the co-founder of an international leadership training company, Dunn Hoisington Leadership. I am married to my high school sweetheart Jennifer and we have 8 beautiful children. (Yes...8.)