Conversio On How To Build a Great Company Culture

If startup culture comes down to what’s in the water at the company water cooler, we could all stand to take a sip of what the Conversio team is drinking.

There’s something weird going on at Conversio. The team is spread out, not just across cities, but across continents. They get together as a team about once every six months. And they just might have one of the strongest company cultures out there. 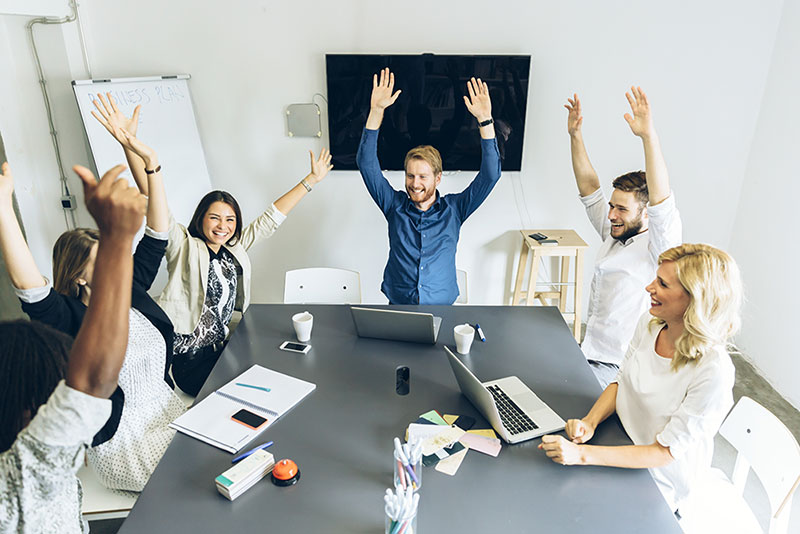 Their secret: the entire Conversio team is intensely, radically, maybe even fanatically committed to their company culture.

Not that that’s a bad thing. Quite the opposite. If startup culture comes down to what’s in the water at the company water cooler, we could all stand to take a sip of what the Conversio team is drinking.

And that formula has its roots with the company’s Founder, Adii Pienaar.

Startup culture is something of a passion of Adii’s. When he first started Conversio, he began developing what would become Conversio’s company culture almost from Day 1.

We asked Adii to stop by and share some of the secrets to what makes a great company culture, and what he would be the first person to say is the Conversio team’s success, not his.

What we got was a master class in collaboration, communication, and choice – in other words, the ingredients to building a kickass company culture.

“Culture ultimately happens, whether you work on it or not,” he says. “But I’d rather influence and build the culture that I want, instead of working in the one that just happens.”

When Adii first started working on the idea for Conversio, he knew he wanted to make the culture of the company he was building every bit as much of a focus as the product itself.

“I was initially a team of one, and I took the first steps to setting some values and thus shaping our V0.1 culture,” he remembers. “At that stage, the culture and values were probably very aligned with mine as an individual.”

Not that there’s anything wrong with that, he notes. “It’s the same with the business idea too; it just has to start somewhere, and that’s what founders are for.”

As for how Adii went about shaping and building the company culture in those early days? The way he sees it, it boils down to two major steps. “One, I wrote a short culture code (a list of 8-10 values) which I shared with founding team members before they joined,” he says. “And two, I focused on hiring individuals that would be a personality and cultural fit based on those values.”

From there, Adii says, it’s a matter of rinse and repeat. That “V0.1” culture attracts a strong team, and then that team helps to shape the next iteration of your culture, which attracts an even stronger team – and on and on.

Once you have those core company values in place, Adii says, the next step is to make sure to place them at the center of everything you and your team does.

“Just keep talking about your values and what that means for your culture,” Adii says. “In many of our conversations and discussions, even brainstorming sessions, we will ultimately loop around to think about how what we’re planning or hoping to decide aligns with our values. So values become an omnipresent consideration – a True North of sorts.”

When you make that commitment to make your company values your True North, a lot of the rest of it falls into place.

“When it reaches that level of omnipresence, it shines a light on certain things that are important,” says Adii. “So when new team members join, they definitely see those important things first, or with greater prominence, which immediately makes it easier for them to adopt our and our culture values and culture.”

MAKE THE TEAM A PART OF THE JOURNEY

Another thing the Conversio team emphasizes as part of their company culture, which you may have picked up on just from how that culture was built: team ownership. Everyone at Conversio feels like they have a hand in shaping, not just their own role in the company, but where the company is headed as a whole.

The first place you spot that is on the “Meet the Team” page of the Conversio website. Everyone on the Conversio team gets to choose their own job title. The results are idiosyncratic and, more often than not, hilarious. Job titles include Swan Princess of Code, Master of Coin, and High King of Ecommerce (that’s Adii’s moniker). And another thing to note about that team page: each time you visit, the team appears in a different order – a nice reference to the company’s horizontal structure.

Symbolic job titles and randomized team pages are one thing. But Conversio’s commitment to transparency and teamwork also extends to bigger-picture decisions happening at the company.

“We’re very transparent internally and are almost-democratic in our decision-making,” says Adii. “Getting everyone involved in important projects or discussions to the nth degree makes it feel and be very inclusive. The effect is that we’re ultimately bonding around the same campfire (our culture and our values) that keeps all of us warm and that fires up this machine.”

That feeling of ownership is essential for building a great company culture that’s going to attract the right kind of people, Addi notes. “The things that sprout from that inclusion & collaboration are all important for ambitious individuals: accountability, ownership, having challenges, being able to influence important things, impact, being heard, feeling valuable.”

In other words: if you want kickass employees, you have to commit to building a great culture that lets your employees feel kickass. Less like employees, and more like members of a team that are all working together to achieve the company’s goals. That’s something that Adii and his team have taken to heart – and it’s paying dividends all the time.

Great CULTURE: IT’S WHAT YOU DO

At the end of the day, talking about your company culture can only take you so far. At a certain point, you have to put it into practice. You have to walk the talk and live the principles that you’ve proclaimed as important.

“Ultimately, culture is probably just a fancy word to capture or group the things that one does,” observes Adii. “So for us as a team, we’d say we have a family- or life-first culture. What that actually just means is that we have certain values that guide a team on how they act.”

What does a “life first” culture look like? It starts with giving team members space to actually live their lives.

“We have a few parents with young kids on the team, and young ’uns get stick every now and again, which means shitty sleep the night before,” he says. “Whenever someone mentions something like that, the response is always, ‘We’ve got this today. You get some sleep.’”

That might sound simple, says Adii. And maybe it is. But it’s also essential to the culture he and his team have built. “It’s an important part of our values. And when that actually happens on a weekly basis, it creates those deep bonds that are much greater than the camaraderie on team-building activities,” Adii says. “When I think about our camaraderie, I think that happens on a daily/weekly basis when we encourage & support each other to live our lives outside of work.”

Startup founders, take note: the small gestures you and your team make to support each other every on the most run-of-the-mill, innocuous days make more of an impact on your culture than a hundred movie nights or company retreats. So when you’re thinking about culture your team is building, start small – it makes a big difference.

STRONG CULTURE IS A CHOICE

Adii is quick to note that the culture he’s built with his team doesn’t come without a certain amount of sacrifice.

“We probably sacrifice ever being a unicorn,” Adii says. “The Startup Way™ is about growth, speed and scalability at almost all costs.”

“Growth at all costs” is definitely not what a life-first culture looks like. And the Conversio team’s radical thesis is, maybe that’s okay. Maybe relentless pursuit of growth doesn’t have to be a company’s sole reason for existing. Maybe ensuring that people enjoy the place where they spend 50 percent of their waking lives (and possibly more) is a worthwhile goal in itself.

“We definitely move slower than a team that does 50 hours in the same office every week,” Adii says. “But that is a conscious tradeoff. It’s hard not to get sucked into The Startup Way™, but when it pops up and we feel pressured to do more faster, then we try slow things down and be life-first.”

Adii is quick to point out that he’s not trying to suggest that what companies that do prioritize growth and speed are doing is somehow worse than what he and his team are doing. “I’m not saying either/or is good or bad. And we probably do both things, depending on the context,” he observes. “What I do think is important is the ability to choose which way you want to go with any decision.”

At the end of the day, building a strong company culture comes down to choice. It’s about making a conscious decision about what where to put your focus – and where not to put it. It’s about the choices that you and your team make each and every day. So keep making choices together.