How I Became a Botrepreneur.

Or: Why I Left My Six-Figure Job For a Chatbot 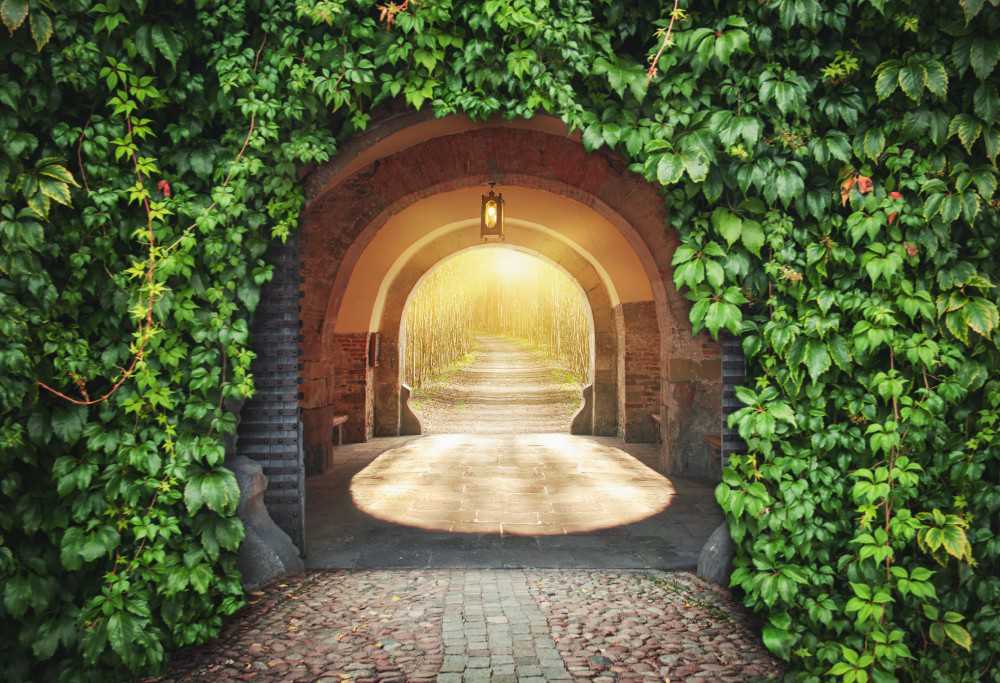 It’s been a little over a month since I received my last paycheck as a full-time Developer. That’s the day shit got real.

I spent over a decade building products with great people at a Fintech company. Walking away from the comfortable six-figure job was hard, but ignoring my thirst for more was even harder. The decision to leave was easier knowing I had two chatbots in Slack’s App Directory. Both with thousands of installs, tons of dedicated users, and one starting to generate revenue. The door to botrepreneurship was waiting for me to walk through.

Around this time last year I began my exploration into chatbots. I had no idea of the onslaught that would soon develop. I was spending sleepless nights learning Node.js and tirelessly combing through Slack’s API documentation. My obsession to build something that intersected with the place that so many people were communicating in daily was fierce.

The goal was to build something simple and useful. My 2016 New Year’s resolution was to become a better person, so I built a bot to help with that. I ended up building Humblebot, a chatbot that sends messages every morning on how to be a better person. I submitted it to Slack’s App Directory and a few days later I received an email from Slack saying Humblebot was approved. It felt great!

Building Humblebot was fun, but I was hungry for more. My hunger would lead me to build HeyTaco!. At the time, I was working on a talent development platform during the day and HeyTaco! at night.

I had a vision of a place where people could recognize each other for the little things that happen every day. I imagined a place that had a currency. People could trade this currency. The currency was controlled and limited to create scarcity, and the currency was… tacos!

After finishing the first iteration of HeyTaco! a colleague added it to our company’s Slack. Within a few days dozens of people throughout the company started appearing on the leaderboard. My little passion project was turning into an underground taco economy.

After a few twist and turns, HeyTaco! was featured on Product Hunt. Below is a screenshot of the original homepage on February, 9th 2016. 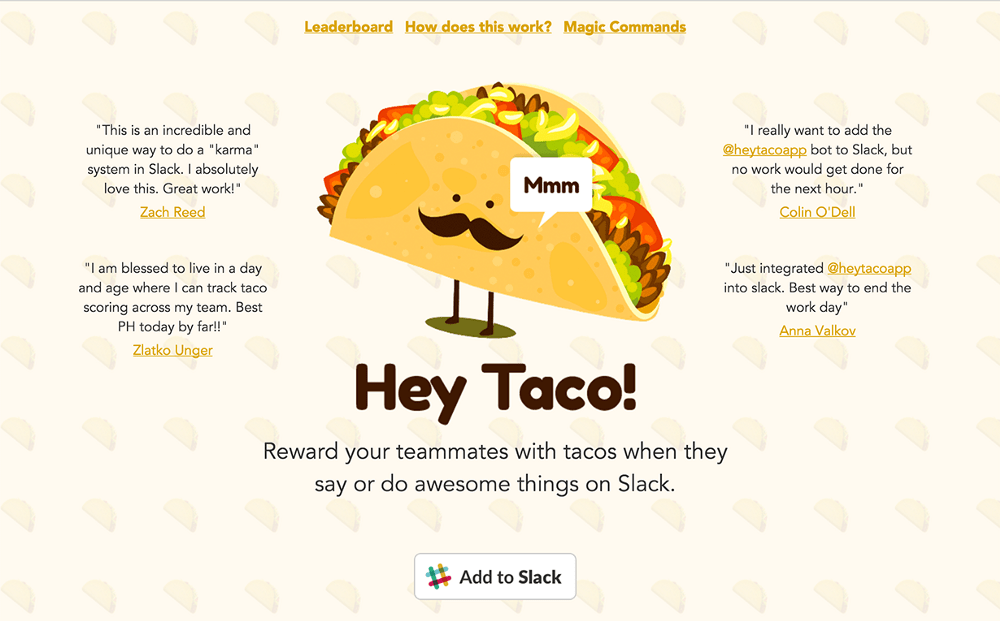 Usage started to rapidly increase after HeyTaco! was added to Slack’s directory. Dozens of new teams were adding HeyTaco! daily. I spent weeks learning how to scale WebSockets and fixing bugs. I also started to hear of other taco economies developing around the world. The opportunity became clear and I knew I needed help.

I asked my colleague Blake Bos if he wanted to join me and help with HeyTaco!. He was by my side when HeyTaco! was just an idea and helped hone the early direction. With his background, knowledge of human centered design, and our shared values, I knew I wanted him to be a part of developing HeyTaco!.

At the end of April I received an email from a start-up factory called Betaworks. They expressed interest in HeyTaco! and at the time they were getting ready to kick off Botcamp.

The opportunity to be part of Botcamp was exciting for us. The next month or so Blake and I had a few Skype meetings with key people at Betaworks. Blake even drove 5 hours to where I was vacationing to make a call for an impromptu pitch to their investing team.

Two months later they told us we wouldn’t be participating in Botcamp. It was a pretty big let down, yet, they came back to us with a proposal.

They wanted to give us PlusPlus (a somewhat competing chatbot) for a stake of HeyTaco!. Blake and I took a train up to NYC and met with their team. They gave me a peek at their code and flashed some numbers.

After a lot of deliberation we decided it wasn’t a good fit, and we called Betaworks to let them know we weren’t interested. It was a tough decision, but it felt right. We liked the folks at Betaworks, but we believed the distraction of having two code bases and products would have been our undoing. We haven’t heard back from Betaworks since, so it feels like it was a good decision for both parties.

At this point, I decided to pause development on Humblebot and focus entirely on HeyTaco!. I was scrambling to figure out how I could work on HeyTaco! full-time.

In July, I even put Humblebot up for sale in hopes of raising money that way. Valuation was hard since there had not been any previous Slack bots sold, and after a handful of offers I decided to keep my bot.

Below are the offers I received for Humblebot.

….You can see why I had a hard time valuing it

Over the next couple of months Blake and I made improvements to HeyTaco! and focused on learning from our customers. Our customer conversations were a game-changer. Hearing stories of how appreciation and giving were changing teams was incredible. For many of these teams, the taco had become their currency of kindness. These stories are the reason why Blake and I have fallen in love with HeyTaco!.

After working out an investment deal with our employer we spent the end of 2016 transitioning from part-time to full-time work on HeyTaco!.

This gave Blake and I time to focus on digging the foundation necessary to turn HeyTaco! into a lasting business; a life-long dream of mine.

One of the big problems with our first version of HeyTaco! was that we never intentionally created a business model. We added Premium HeyTaco! accounts months after launching to cover the increasing hosting costs. Our customers paid us to create more rewards and get more analytics.

This business model converted teams into customers, but it has a large flaw. Our customers aren’t paying us for what creates the most value for them — giving tacos.

Instead we’re charging them for creating rewards and viewing analytics. These are nice-to have, but not crucial to helping teams show more appreciation. This creates a perverse incentive to focus on improving things that don’t add the most value to our customer’s life.

So in HeyTaco! 2 we’ll be trying a new business model that creates an incentive for us to focus on what matters most — showing appreciation.

After months of testing and learning we’re happy to announce HeyTaco! 2 will soon be available. It’s the same simple and fun HeyTaco! people love, but with more memories, hilarity, and a few brand new things we can’t wait to share. We’re inviting a few teams in early! Let us know if you’re interested in getting in early by completing our HeyTaco! 2 Pre-board. Also, if you purchase HeyTaco! at its current discounted price you’ll be guaranteed that lower price forever!

This was also shared on Chatbots Magazine.

Hi, my name is Doug. I'm the founder and Chief Taco Officer of HeyTaco!, a fun and unique platform that brings people together by inspiring acts of kindness. Before founding HeyTaco!, I spent over 10 years designing and developing products in the financial services space. In 2001 I earned a design degree and began my career designing banner ads for websites. I later taught myself how to program and grew an appreciation for user experience design. I now find fulfillment building products that matter.