As a leader, the most crucial question to ask yourself is, ‘Am I behaving in a way worth modeling?’

I had never heard so many f-bombs in my life. That’s saying a lot, considering I’ve watched my fair share of Martin Scorsese films. It was a Tuesday afternoon, and my 2-year-old and I were walking through the mall. A group of young people followed close behind, not even attempting to censor themselves.

Hey, I get it. I was young once — many years ago. The absence of parental authority allowed these youngsters to enter an uncensored, primal place of freedom. When the cat’s away, the mice play. The same thing happens with the employees in your organization when you’re not around — albeit with fewer f-bombs. Who knows, maybe more.

As the old saying goes, “What you do speaks so loudly that I cannot hear what you say.” On the job, leaders who rely on their titles to maintain the status quo aren’t living up to expectations. They aren’t modeling a system based on integrity. And integrity is at the core of high-performance teams. A Robert Half Management Resources study showed that 75 percent of professionals felt integrity was more important than other leader virtues, including competitiveness.

In other words, they cemented what we innately realize: You can’t expect to harvest bountiful crops if all you sow are rocks and broken glass.

‘The beatings will continue until morale improves’

Once upon a time, I had a spectacular assistant manager. He was like a little brother to me and a key leader in the organization. Unfortunately, I wasn’t very spectacular during that season of my life, and I took my every frustration out on him. Not surprisingly, he resigned — during a public meeting he arranged via text message. Turns out, he didn’t think I’d yell at him if other people were around.

Was it a low point? Absolutely. But it was also one of the most important moments in my development as a leader.

Giving constant criticism until performance improves might lead to short-term gains, but it will always end in long-term losses. Had I been more attuned to my (lack of) emotional intelligence, I might have slowed down and created a more positive work environment where he could thrive, grow, and eventually replace me.

Like what you’re reading? Be sure to check out 5 Tips to Boost Employee Morale in the Workplace

Seeing the bright side is a discipline unto itself. When my daughter is covered in syrup with stickers all over her face and shoes on the wrong feet, it’s easy for me to get frustrated and default to the fast solution — fix the problems, lose the lessons, and deal with a cranky toddler. But what if I praised her progress? After all, she finished her pancakes, put stickers on herself instead of the dog or furniture, and attempted to dress herself — something my wife would claim I’m still learning. In other words, I need to become a “right finder” rather than a “fault finder.”

When you allow others to fail without fear, especially those who matter most, you’ll enjoy an environment of respect, effort, passion, and development.

Leading through carrots, not sticks, works better than lecturing ever could. Tardiness is better solved by publicly recognizing people who show up early rather than publicly displaying frustration when someone is late. Exhibit those wanted behaviors, and you’ll be seen as a leader with integrity.

High character will get you more internal promotions than a ping-pong table in the lounge. How great would it be if your corporate slogan were: “We need a new entry-level sales rep because the last one got promoted to CEO?”

HOW TO CREATE A POSITIVE WORK environment 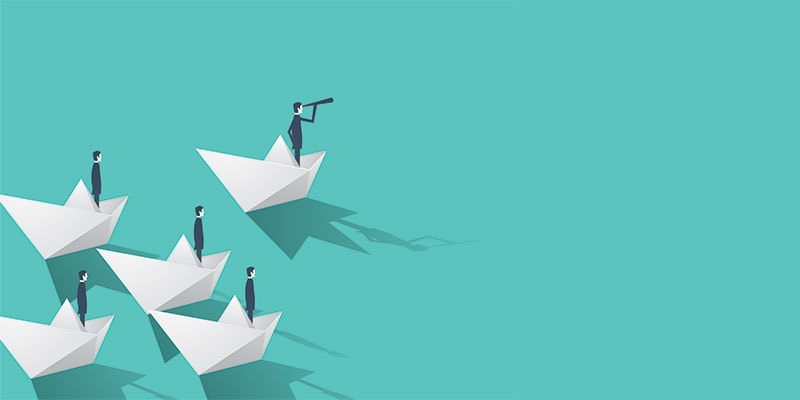 Want to build an organization full of happy, productive employees? Start by implementing these five strategies:

Exhibit “compassionate bluntness” with individuals around you. High-morale environments are built on genuine conversations. Recognition should happen abundantly, but deservedly. And when mistakes occur? Everything is a lesson. Play the role of a caring coach who develops people with earnestness in a progressive “culture of candor.”

2. View everyone as a partner.

Treat your human capital as fellow travelers on an adventure, not as cogs in a machine. Get to know their stories: Why do they work with you? What are their five-year plans? How does working with you fit into that plan? Take notes if you have a bad memory, and be sure to remember their birthdays. It’s OK that most of them won’t work at your company forever; your objective as a servant-leader is to make them better.

3. Put public recognition on the agenda.

When I sold knives, every meeting agenda included verbal recognition to colleagues who exhibited exemplary work. It built drive and confidence — and unintentionally ensured that the next boss those employees had looked unappreciative by comparison. Giving employees praise for specific behaviors and results eliminates ambiguity and shows all team members what you value. Every leader should know that what gets recognized gets repeated.

People appreciate having a leader who recognizes their achievements. Send — or merely hand — your employees notes letting them know you appreciate their hard work. Don’t just fire off an email, though: In an Ask Your Target Market survey, 72 percent of participants felt digital notes were less meaningful than those delivered on paper. So even if your handwriting looks like that of a preschooler, put in the time to handwrite notes regularly.

5. Offer visions for the future.

When you see talent, speak up. I once noticed that a young sales representative showed serious potential after just three days of training. I told her the organization had management opportunities for people like her if her achievements continued.

Unsurprisingly, she hit several career milestones because I handed her the vision to excel. Ten years later, she remains a valued leader in the organization. No matter how long a talented employee has been with your company, she should be offered the blueprints for a successful future.

As a leader, you have more control than you think. Your employees look to you for guidance — their actions and attitudes will reflect your own. Focus on finding what’s right and exhibiting behaviors you want your employees to emulate, and you’ll cultivate a high-morale workforce that outperforms your expectations.

Mike Monroe is a Digital Strategy Manager at Vector Marketing. He is a Christian, husband, dad, marketer, and wannabe triathlete. Mike started working at Vector Marketing in 2000 as a student at Boston College. He wanted to stick out from the crowd and develop himself professionally. Nearly two decades later, that goal hasn’t changed. Learn more at GetSkillsForLife.com.