Don’t Ever, Ever Use This Guerrilla Marketing Tactic

I going to share the story of the creepiest, least appropriate guerrilla marketing tactic I’ve ever come across. I’m not going to name the startup founder who did it, nor am I going to tell you identifying details about his company. I just want to make sure that no founder trying to get ahead hears a story like this and thinks, “Oh, that’s a great idea!”

No. It is not a great idea. It’s terrible.

Let’s rewind. The other day I came home to a package on my couch. Now, this isn’t a rare occurrence — I order off of Amazon as much as the next Millennial American — but I didn’t recognize the return address. “Weird,” I thought. “What’s this?”

My boyfriend poured me a glass of wine and I absentmindedly ripped the package open while telling him about my day. It was promotional material for a company I’d never heard of. I was confused — why was I receiving this package? — but I have a terrible memory. I figured maybe I gave out my address without remembering? (Possible.) Or maybe my boss gave out my address? (Unlikely.) 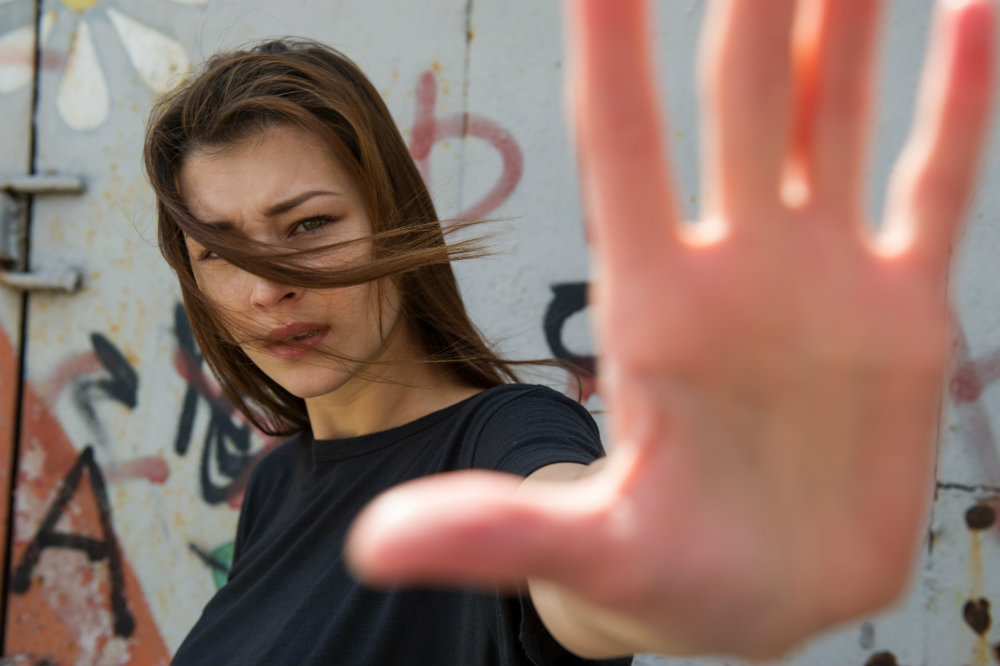 I put the name of the founder into my email search bar and pulled up a pitch email from about a month ago. Except, I didn’t respond to the pitch.

And, okay, that wasn’t the most polite move on my part. I could have sent him a quick “no thanks!” — but I had thought that the idea was not only something the world didn’t need, but it was also wasteful of environmental resources. Also, I get a lot of pitches and responding to all of them would also be an inefficient use of my time.

But here’s a pro tip, founders: A non-response to a pitch email is not an invitation to send a package to my home address.

So I emailed the guy, asking him how he got my address. (I realize now that I should have also asked him how he got my personal email address, which isn’t freely available online, but let’s focus on one creep factor at a time.) He responded.

That response infuriated me.

You don’t remember where you got my address? You didn’t document your process at all? You had to seek out my address somehow, dude, because I sure as shit didn’t give it to you freely. Your initial email was less than a month before I received this mystery package so if you truly “don’t remember,” your memory is even worse than mine.

This was my email response:

“I don’t believe that and please don’t send me any more packages. I didn’t agree to be on your list, nor did I send you my address. If this is a guerrilla marketing thing, I’d advise you to stop.”

Let’s go over all of the ways this isn’t okay.

I just want to reiterate this point, because it’s important. I did not consent to receive packages from this company. I did not give this founder my address. That means he sought it out some other way, which is violating and creepy AF.

I mean, look, I think we’re all kidding ourselves if we believe that our personal information isn’t totally findable online. It just takes some money and a little bit of persistence to track down basically anything. But general decency and respect for people’s privacy prevents most of us from doing that. I’m not sure what screw is loose in this founder’s head, but clearly he didn’t get the memo.

2. It was sent to my home address.

Anyone could look up the address of Startups.co if they wanted to — I’ve done it myself when sending things back to the home office. But, Startups.co is a business, with a freely available address. This guy could have sent me a package at that address — which is totally something that’s happened before! And it wasn’t creepy! It wouldn’t necessarily be wanted, but it wouldn’t be creepy.

The difference between sending an package addressed to me at my place of my employment — a package that is relevant to my work — and sending one to my home address is what transforms this “guerrilla marketing tactic” from “scrappy” to “stalker.”

3. I recently moved, so this is a brand new address.

What makes this doubly weird is the fact that I moved six months ago, so this address is very new. I can’t pinpoint why, exactly, that makes me feel weirder about this “guerrilla marketing” move, but it does.

4. A man tracking down my personal address and sending a package feels incredibly violating.

The tone deafness of a male founder sending a female blogger a package at her home address is… Astounding. As women, we’re taught to constantly be aware of danger from men, whether it’s walking in the street or opening the doors to our apartments or being wary of guys we date. To have a man seek out my home address and then enter my home via a package that I did not want is upsetting, violating, and left me feeling uneasy for the rest of the night.

But this? This is not great guerrilla marketing. This is creepy, violating, and weird. Please take my reaction to this campaign as a lesson and don’t ever do something like this.

Instead, take one of these five examples of great guerrilla marketing as a starting point: 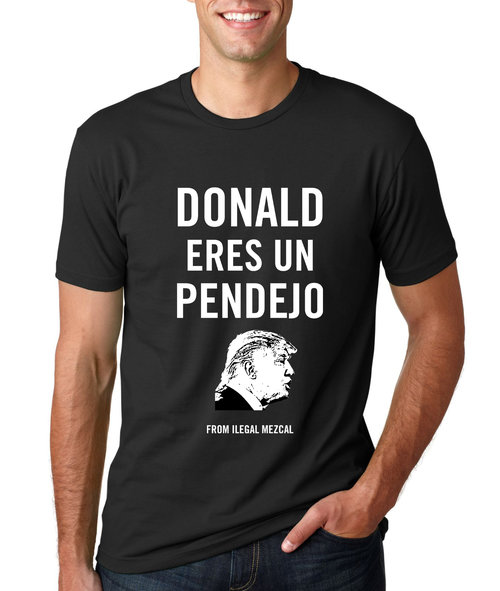 Ilegal Mezcal is a small but high-end liquor company based in Mexico and Guatemala. During the 2016 election, they created a campaign around Donald Trump’s statements about immigrants. They made wheat paste posters, t-shirts, and even projected an image in New York’s Union Square that said some combination of the following “Donald eres un pendejo. The only thing that should be ilegal es mezcal. #IlegalMezcal” and included an unflattering profile of Trump. (That translates to “Donald, you’re an asshole. The only thing that should be illegal is mezcal.”)

In this example, Ilegal Mezcal played with their name, the hype that Trump was generating, and a cause that they care deeply about to not only fight back against what they saw as unjust and discriminatory action but also promote their brand. They used inexpensive tactics (street art, t-shirts, and projection) and got a lot of press. It’s perfectly on brand guerrilla marketing. 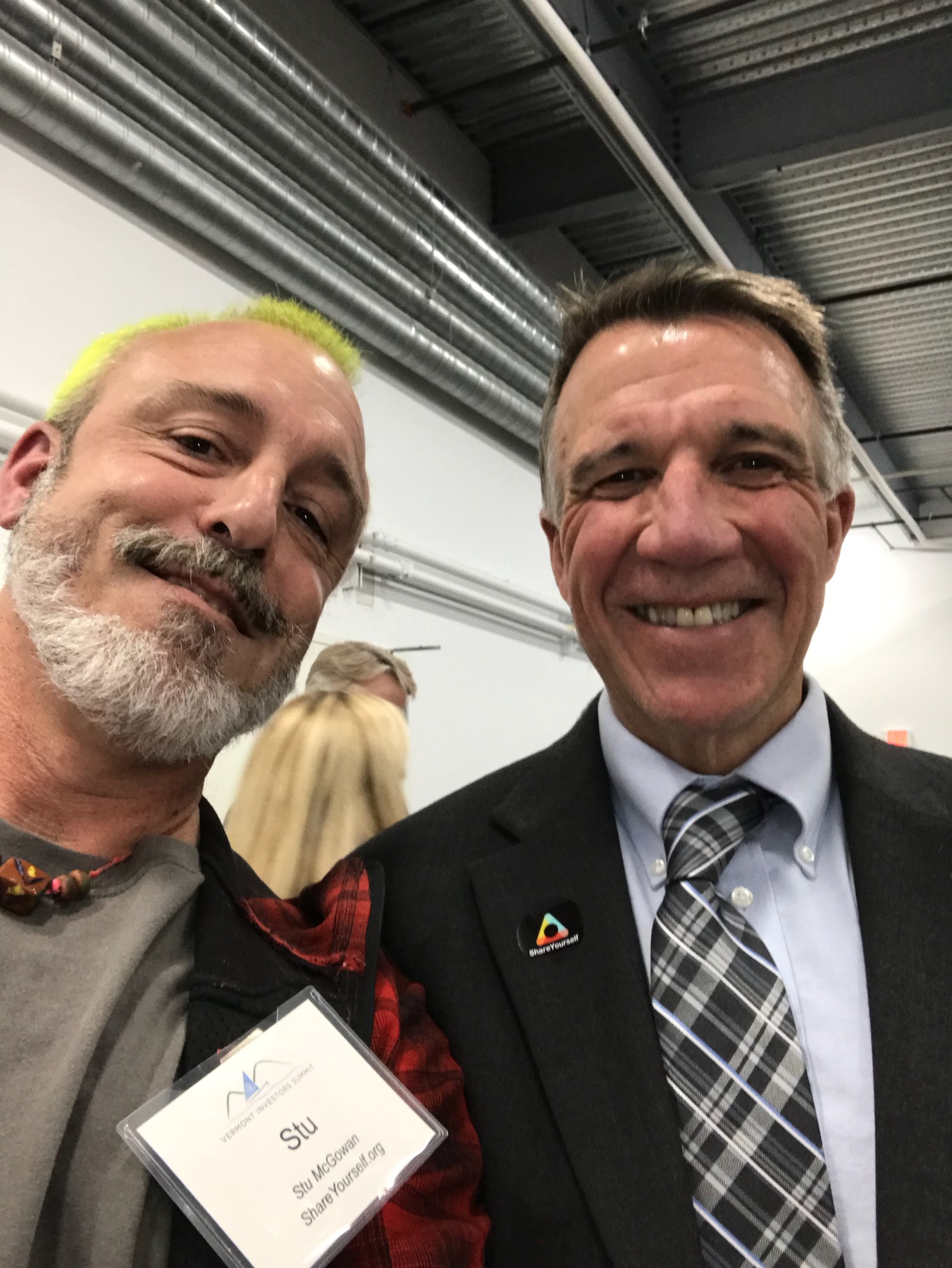 As Stu McGowan geared up to launch his platform for social entrepreneurs, ShareYourself.org, he went to a networking event with a bunch of investors and politicians. He was equipped with business cards and stickers with the ShareYourself logo. After talking to someone about what he was doing, he asked if they’d wear one of his stickers. By the end of the evening, almost 50 people were wearing ShareYourself stickers and he heard reports that people who didn’t have them on were asking what they were.

While this move is smaller scale, it’s a great example of a guerrilla marketing technique that is cheap and impactful. That room was full of people that could potentially bring a lot — from money to expertise to press — to Stu’s nascent platform. His stickers got everyone in the room to talk about ShareYourself, even after they’d stopped talking to him.

He even got a sticker (and a photo) on the governor of Vermont.

(Disclaimer: Stu is my dad. Doesn’t negate the fact that this is a boss move, though.)

One very famous guerrilla marketing campaign comes from HBO back in 2006. The Soprano’s was one of the most popular shows on TV and HBO obviously had cash for massive, conventional campaigns. (And I’m sure they did some of those, too.)

But one guerrilla marketing tactic stood out from the crowd. To drum up hype about the show’s final season, HBO placed Sopranos bumper stickers on the backs of NYC taxis, next to a fake arm hanging out of the trunk. It was relatively cheap, totally on brand, and got a lot of attention. All guerrilla marketing wins!

Back in 2010, Foursquare didn’t have the cash to make a big splash at SXSW. So instead, they paid $5.99 for a ball and some chalk and set up a game of four square. The founder went face-to-face with people who waited in line to play and Foursquare saw a surge of check-ins. They also generated a lot of press — which, really, is the ultimate point of most guerrilla marketing campaigns — for very little money.

Again, on brand, inexpensive, and caused a stir. A+ for Foursquare.

ModCloth had a campaign going for a while called Blogger of the Moment. They picked fashion bloggers, featured them on their blog, and then named a dress after them. It’s an online guerrilla marketing tactic that cost little, got them very inexpensive press, and spread the word about their products to potential new clients. Teaming up with influencers is a great way to get the word out, when done properly.

All of these campaigns have a couple of things in common: They’re unique, eye-catching, inexpensive, and they don’t violate anyone’s privacy. All hallmarks of a great guerrilla marketing campaign.