Save Your Startup With This Founder Advice From Thelonious Monk

There is genius waiting inside each of us. So don’t let your startup slip away, and instead, get in there and lead the band. Take us all on a journey. Let your imagination be as big as the world.

Thelonious Monk was a fantastic jazz musician, and an amazing band leader. Did he run a tech startup? No. But he could have with all these words of wisdom.

It’s a no B.S. manifesto. Each gig, each song, and each band mate was mission critical to Monk. And our startups need to be treated the same way. It’s easy to get caught up in the busyness. But as founders we have to gather, support, and grow great teams or risk losing the whole endeavor.

Below is Monk’s complete, original list of advice for band members. But let me break it down for you and swap a few musical references with the proper modern startup terminology. 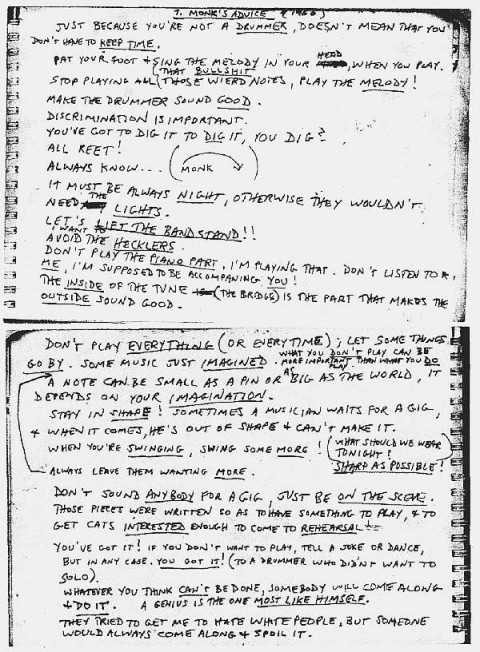 JUST BECAUSE YOU’RE NOT A [JOB TITLE], DOESN’T MEAN THAT YOU DON’T HAVE TO UNDERSTAND IT.

So many of us founders debate over our role in the startup. There are sometimes obvious divides like the technical person, ‘CTO’, the idea gal or outgoing one, ‘CEO’, and similar. Whether there are obvious expertise levels or not, if you’re the ‘CEO’ as I was and leading fundraising and exposure for your startup then you are not excused from understanding the tech.

Do we all have to be coders? Not at all. But you better be tightly involved with strategy, decision making, and general understanding of how this thing is being built. If the drummer is the only person in the band keeping time, the band will sound terrible. Each founder needs to know the key structures of the business — even as we focus in on our given area of strength.

I’ve done it when I was running my gaming startup. Created and bought myself business cards. Opened superfluous Twitter accounts. Built websites and blogs on special domains. Paid for marketing designs before a product existed. Bullshit.

It’s all the things we do to avoid doing the things we must. The melody, the core product, feels like too little. I should be doing more. Well ignore that voice and get back to the basics. That other stuff is taking up space, and creativity, and money, and time — the most precious of all the resources. It does nothing for you now. Trust me, I’ve watched it all do nothing for me in the past. You aren’t going to be some baller company on day one. You’re still trying to prove if there is a market for your idea, and then if you can scale it. If either or both of those is no, then save that extra creativity, money, and time to pivot or try again next time.

What is Monk talking about here? In jazz music, the most beautiful and powerful moments occur not because four amazing musicians play something brilliant all at the same time. They occur because 3 people are maintaining a melody with precision allowing space for one to improvise and delight the listener.

You’re a startup. There is no way you can wow me with 7 amazing products. Discriminate and know what your core value is; what your differentiator is. And make that note sing. You can layer in good ideas and user feedback over time, but first be thoughtful and let your product stand on it’s own and do what it ought to do. In my gaming startup we tried to make some productivity apps as well. It was a complete waste. Have an opinion in your product, in your business, and be ok when it’s not for everyone. Nobody gets excited about average, and you need early, stark-raving fans.

When a band is so in sync, and passionate about their music and performance, then the entire audience goes on that journey with them. I’ve watched this same thing occur in my startups when the team is laser focused on changing the world (or some piece of it) then customers, and media, and other onlookers take notice and want to be a part of it, too. You can buy attention with ads, but truly taking people on a journey is transformative. It also frees you from fearing competition and all of the second guessing.

Every founder, me included, can tell you an arm’s length list of people who said it couldn’t be done. Ask Brian Chesky about Airbnb. Or ask Elon Musk about, well, all of his companies. How about Stewart Butterfield and his game startup that would later become Slack. You could even go way back and ask Jack Dorsey about his podcasting company, Odeo (where Twitter was invented).

The hecklers, naysayers, and trolls will never go away. But you need to limit your intake and find ways to reduce their impact on your psyche. I would lean on my wife, my co-founder, trusted advisors, and strong friends to keep me grounded and sane.

The flip side of what Monk is speaking to here is the idea that if you do “lift the stage” and play a strong performance, then you silence most hecklers before they even begin. So let’s keep focused on shipping amazing products.

WHAT YOU DON’T BUILD CAN BE MORE IMPORTANT THAN WHAT YOU DO BUILD.

It’s the product manager’s siren song. If you’ve done it before then you know that anything you ship into customers’ hands is nearly impossible to pry away later. Even the worst, least-used features require an act of congress to sunset. So don’t overbuild. Don’t think you know what extra fluff customers will want. Don’t play extra notes that aren’t needed.

STAY IN SHAPE! SOMETIMES A FOUNDER WAITS FOR A PITCH AND WHEN IT COMES SHE’S OUT OF SHAPE AND BLOWS IT.

WHAT SHOULD WE WEAR TONIGHT? SHARP AS POSSIBLE!

First impressions matter. When you come dressed and ready to play, it stands out. In a sea of t-shirted and jeaned, disheveled sneaker-clad slackers, make sure you’re memorable. Combined with your thoughtful and honed pitch, you will certainly leave your mark on any new prospect — customer, mentor, investor, or otherwise.

That said, when I was on the fundraising trail I could only afford one suit. Remember, none of us are ballers yet. So, what did I do? I wore that suit to every investor pitch, bar none. I jokingly refer to it as my million dollar suit (since I raised that and more in it!)

I think this is appropriate advice for your product. If you’ve built the right MLP (minimum lovable product), then they should want more. Implied in the wanting is that they like what they have *and* want more. That’s a sweet spot to be in.

But this is also very true for pitching investors. Each stage of the pitch — the 30-second intro, the 5-minute presentation (takes 30 with questions), and the 10-minute presentations (takes an hour+) for final deal close — should be just enough to get them to want more and invite you to the next meeting. It’s a long play where you are planting the seeds of a crucial relationship. Their money is a byproduct, but you are in essence marrying into the family. And if they don’t leave you wanting more, then swiping left and declining the next meeting is the smartest thing you can do for your business.

DON’T ACT ANYBODY FOR YOUR BUSINESS, JUST BE ON THE SCENE.

I am guilty of this one. We probably all are to different extents. What I believe Thelonious is saying is to not imitate, but come prepared and be yourself. Join in with the team/band and make something great that couldn’t have happened if you were faking to be someone else.

I wanted to be like Notch, or Pincus, or Hed — this was back in ‘09 — and I wanted to command audiences, and have followers, and…not be me. But I was the only one with the exact mix of background, experience, education, and expertise (yes, expertise) to do what it took to make my startup great. When I did bring myself back to reality, and acted like me, then the opportunities opened up to make great products, add great fans, and strike great deals.

YOU’VE GOT IT! IF YOU DON’T WANT TO PITCH, TELL A JOKE OR DANCE, BUT IN ANY CASE YOU GOT IT!

I love his supreme kool here, his nonchalance. We each “have it”. If we’ve done the hard work to this point, including the practice, then let’s stop fretting about what might be missing and tell our story. Customers and investors actually want to spend or invest their money on great teams and great solutions.

Our attitude when we approach someone to pitch should come from that place of confidence. If you’re not confident in the story or product, then go back to the top and do the work (see “Stay in shape!” above). And worst case, if you aren’t ready right then, at least be a fun person and relax a little. Remember we’re planting seeds and building relationships.

I had some chance encounters early on with investors that I really wanted to be a part of my company, but I knew it wasn’t time yet to pitch them. If I gave the standard pitch then it would have ended in a permanent “no thanks”. So I did tell them my story, but I tweaked it to be shorter and more informal and added a hook at the end to get them to say ‘yes’ to talking again soon. That was only possible because I knew the pitch inside out and backwards.

WHATEVER YOU THINK CAN’T BE DONE, SOMEBODY WILL COME ALONG AND DO IT. A GENIUS IS THE ONE MOST LIKE HIMSELF.

I’ve had my own version of this advice for a long time, and it came from real life experience that forced a pivot in my very first tech startup. I like to say:

Any idea you have, so do at least 10 other people right now. It all comes down to delivery. Who’s going to ship first or best?
— Andy Rosic

Of course I like to add that I will out-deliver you any day of the week.

Whatever impediment we think is against us, is against everyone else as well. But someone always finds a way. If we stop complaining, or throwing our hands up, or giving up, and act like ourselves — like geniuses — then we’ll be that somebody who gets it done. I certainly want to be that person. Don’t you?

Monk says genius is waiting right inside each of us. So don’t let your startup slip away, and instead start following Thelonious Monk’s brilliant advice. Get in there and lead the band. Take us all on a journey. Let your imagination be as big as the world.

Andy Rosic is the Founder and Managing Director of Asendu, LLC, as well as Innovation Product Manager at Home Depot. He's a repeat startup founder and product guy with 3 exits totaling nearly $2Bn. Mobile payments at Apple, event apps at Cvent, etc. On his website—andyrosic.com— he offers No B.S. startup support. He stays inspired by people’s stories, and hopes to inspire others with his own.