How to Assemble a Social Media Dream Team

You need a social media team that can absolutely nail it. That doesn’t happen by just putting warm bodies in front of computers. You need a team of innovators, mold-breakers, thinkers, organizers, brainstormers, collaborators, and strategists who are wicked smart, insanely skilled, and ready to push your business to an extreme level on social media.

In other words, you need a social media dream team.

How do you wrap your mind around the social media scene?

Social media has seemed to spiral out of control. It’s bigger than we ever thought it would become. It grows and changes on a daily basis. We’re all done talking about its “meteoric rise.” That’s cliché. We already know that more than a quarter of the world’s population uses social media, and that number is expected to rise. In just a few years, as much as a third of the global population will be connected on social media.

It’s up to us marketers to make sense of the social media scene, and apply this viral form of marketing in order to grow our businesses.

Lot’s of candidates… who to pick?

B.L. Ochman’s informal Twitter census counted just less than 300 million of these people, though they go by different names — from the “freaks” to the “whores,” titles which are mildly unsettling. 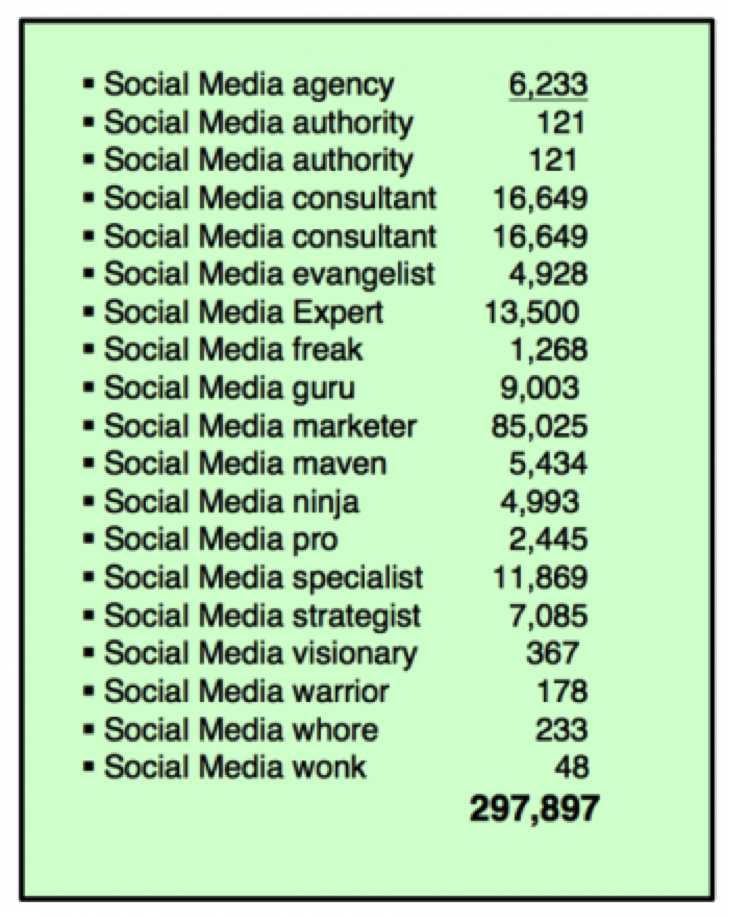 A lot of people profess to have skills, but can show very little to back their lofty claims and questionable titles.

As Adam Tinworth lamented: “Pause. Consider that. Despair for humanity.”

That’s why the social media game is even harder. With so many people clamoring to cash in on the world’s fastest-growing industry, we have a hard time filtering the good ninjas from the not-so-good ninjas.

Lots of social networks… where to start?

Conventional wisdom tells us to join the “Big Four” and then several niche networks. What does this even mean anymore? And how do we roll all that into a cohesive strategy that brings us benefit rather than draining our souls of time and energy?

Lots of metrics… what to count?

And let’s not forget about numbers. We’re marketers. We know numbers. We get the idea of ROI. But the thing about social media is that it has really slippery ROI. How much do you spend? Will you recoup it? How soon?

Lots of tools… what to use?

And then you’ve got the issue of tools. Everyone’s selling something to track, grow, monitor, defend, fight spam, automate, and streamline social media. Do you need tools? How many? What kind?

Because of its mammoth complexity, I suggest hiring a social media dream team.

No, it’s not easy. But for the business hoping to make it to the big leagues, the road is paved with social media traffic. You need this traffic, this audience, and this tribe. And you need a team of social media experts to make it happen.

I’m going to explain the roles you need so you can target the right people.

There are all kinds of work arrangements for your social media dream team — remote work, contract work, short-term work, etc. You can be as creative as you want, as long as you get the right people to give you their best level of work.

Before I discuss the roles you need, you need to figure out your own brand personality.

If you don’t know your personality, then you might want to find a consultant who can help you figure it out before you start hiring recruits. When I’ve provided social media consulting, I’ve discovered huge missed opportunities, simply because they don’t know how to approach this beast we call social media, nor how their brand personality fits in with it.

The social media dream team needs to understand and identify with the personality that your business is trying to advance.

McDonald’s, whatever you think about their food, has a social media personality, and a team that knows what they are doing. Their Twitter team alone has eight Tweeters, and they each share the fun, festive personality that McDonald’s exudes. 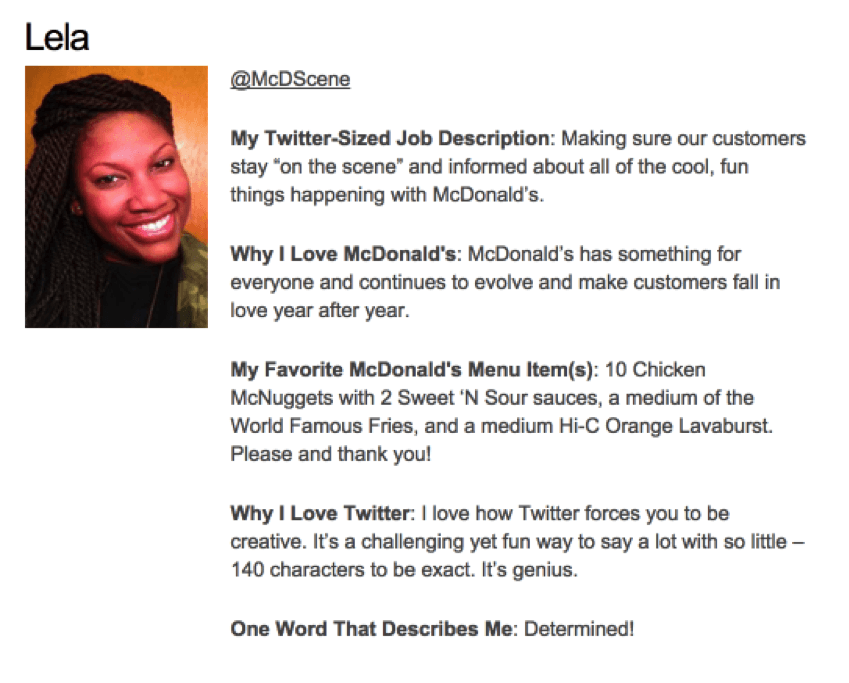 Each of the team members has a passion for McDonalds, and they keep pushing the message on Twitter. 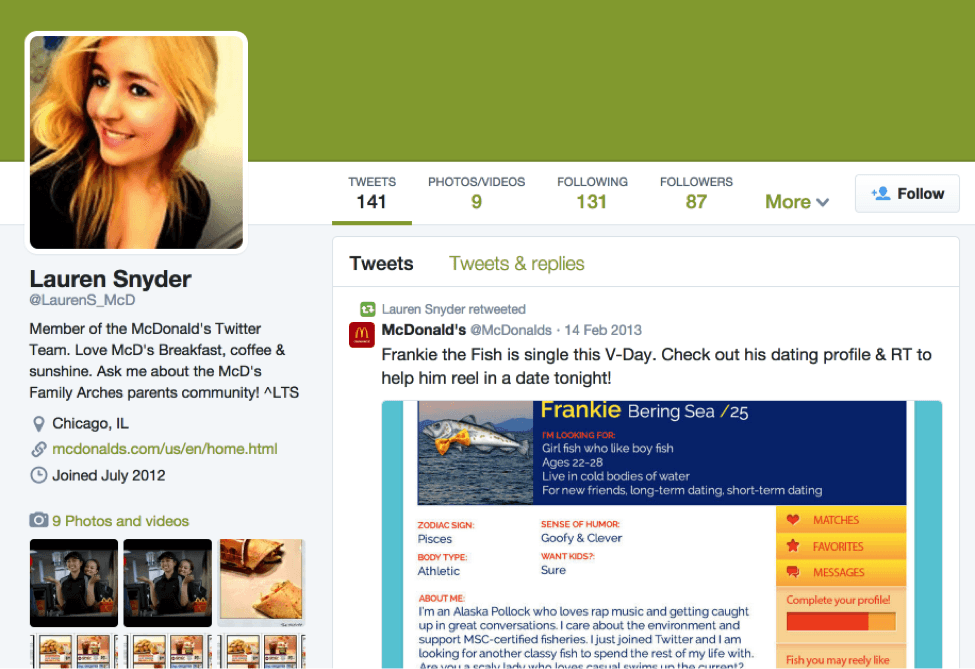 Getting your personality figured out is essential. Next, you need to figure out what skills you need.

There are a few skills that every successful social media operation has in common. I’m going to list them below.

If you were to hire one person in each role, and pay them a modest salary of, say, $50,000 each, then you would be shelling out $300,000 annually in payroll for your social media team. If you’re like most businesses, that’s cost-prohibitive for the HR social media budget. That’s why you’ll need to get creative with the employment arrangements. Plus, you can source people who have several of these skills.

Social media needs design skills. To look good on social media, you need images. The thing about those images is that they need to be optimized for social media platforms.

Thankfully, there are some programs like Canva that make it easy to get the size right.

But you also have to make sure that it looks right. Graphic designers, we need you.

Images have way higher engagement than any other form of posting. Get someone with design skills to back up your efforts, and you’ll be more successful.

A great social media effort requires someone who is organized, efficient, and whose mind works like a mashup of a calendar and a calculator.

Things can get complicated in the social media world. When you have to mesh your social media with a blog schedule, a promotion schedule, a monthly budget, a new product push, and the guy who’s out sick, you’re left with a frightening logistical mess.

You need someone who is really organized. (It’s okay to fake being organized, as long as you can fake it using a system like Buffer or Hootsuite.)

Let’s not forget about the fact that social media is about written communication. A successful social media campaign uses words.

Not just any writer will do. I know brilliant writers who can spin out a beautiful 3,000-word blog post, but can’t update Twitter to save their lives.

It takes a special skillset to create content that is optimized for the social media platforms.

The term “listener” brings to mind someone who’s sensitive and empathetic. Social media listening is about listening to data.

I’ve described some of the process of listening in my Advanced Guide to SEO. (The section is titled “Social Listening.”)

Social listeners know how to tune into the social media buzz surrounding their brand, and respond accordingly. Social media listening can turn into a full-time job pretty easily.

Don’t dismiss this one. Social media listening is the only truly effective way to function effectively on most social media platforms. If you aren’t listening, how can you respond effectively?

There are plenty of advanced tools for becoming a social media listener, but in order to use these tools, you need someone who knows how to do it.

You don’t want to throw away your social media advertising on unoptimized ad spend. Find someone who knows how to stretch the Facebook or Twitter dollar the farthest.

Social media is a round-the-clock adventure. You need a team who can engage at any hour of the day.

British Airways learned this the hard way in their well-known luggage loss blunder. Here’s how it went down: 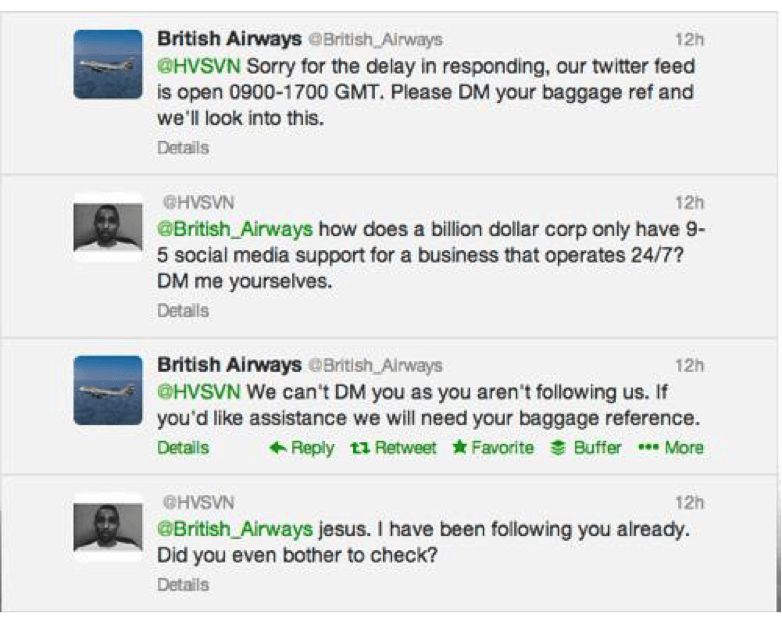 The backlash against British Airways was due to their “sorry, we’re closed” Twitter feed, and then “sorry, we can’t DM you.”

If you choose to help customers on social media, you’ve basically signed up to have a 24/7 helpdesk. Most people who inquire into a business on Twitter expect a response in less than two hours. Even if you’re closed. 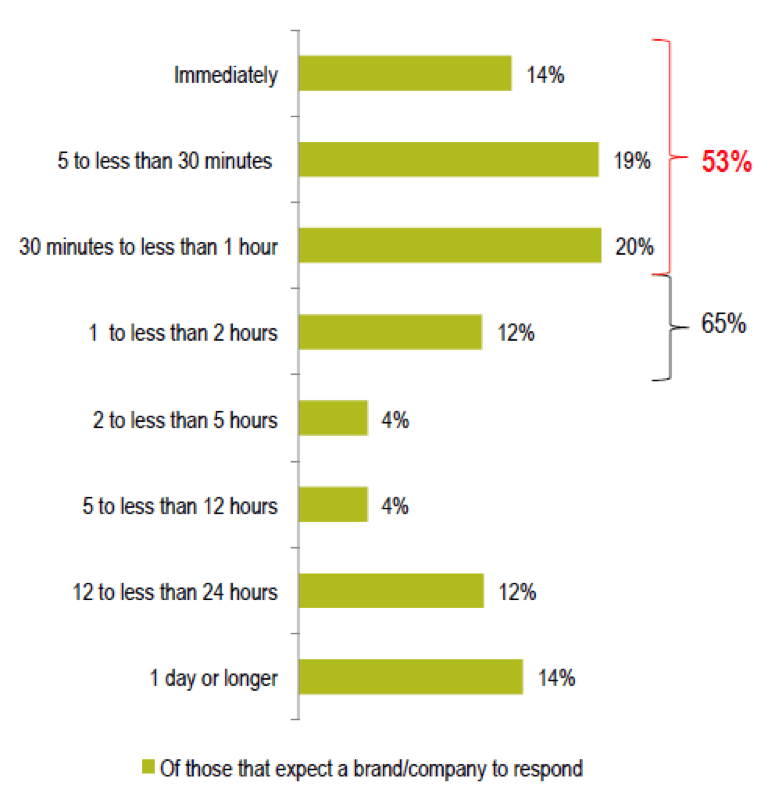 Lithium, the company who conducted the research, explained that “consumers will punish brands that fail to respond on Twitter quickly.”

You need to assemble a social media dream team. Here’s the simple way to do it:

Pack it all up with a big dose of creativity, and you’ve got your dream team.