Lisa Besserman and her team at Startup Buenos Aires are proving to the world that Argentina has the potential to be the next startup hub.

I believe passion is infectious, and when you get likeminded individuals in a room together, discussing real change and impact for not only a company or organization, but also an entire city, it creates a real sense of dedication.

Buenos Aires, Argentina, is not the first place that people think of when they think of startups — but that’s going to change if Lisa Besserman has anything to say about it.

Lisa’s organization, Startup Buenos Aires (SUBA), has been working tirelessly for the past few years to harness and unite the massive amounts of creative energy and technical knowledge that are floating around South America’s most dynamic city.

In just three years, Lisa and her team have not only created a resource hub for entrepreneurs in Buenos Aires — they’ve also figured out a way to connect Latin American talent with the North American and European businesses who want to hire them.

But let me back up, because Lisa’s story of how she went from being a good girl in Queens to uniting the Buenos Aires startup scene is a pretty epic one. (It involves traveling the world, being kidnapped in India, and training as a Muai Thai boxer in Thailand. Go read it.)

Lisa quit her job back home and put those networking skills to use by founding Startup Buenos Aires. She’s also gotten married to an Argentine man who looks like a GQ model and has stayed more or less in one place for the first time in her adult life. Lisa has settled — but hardly settled down. 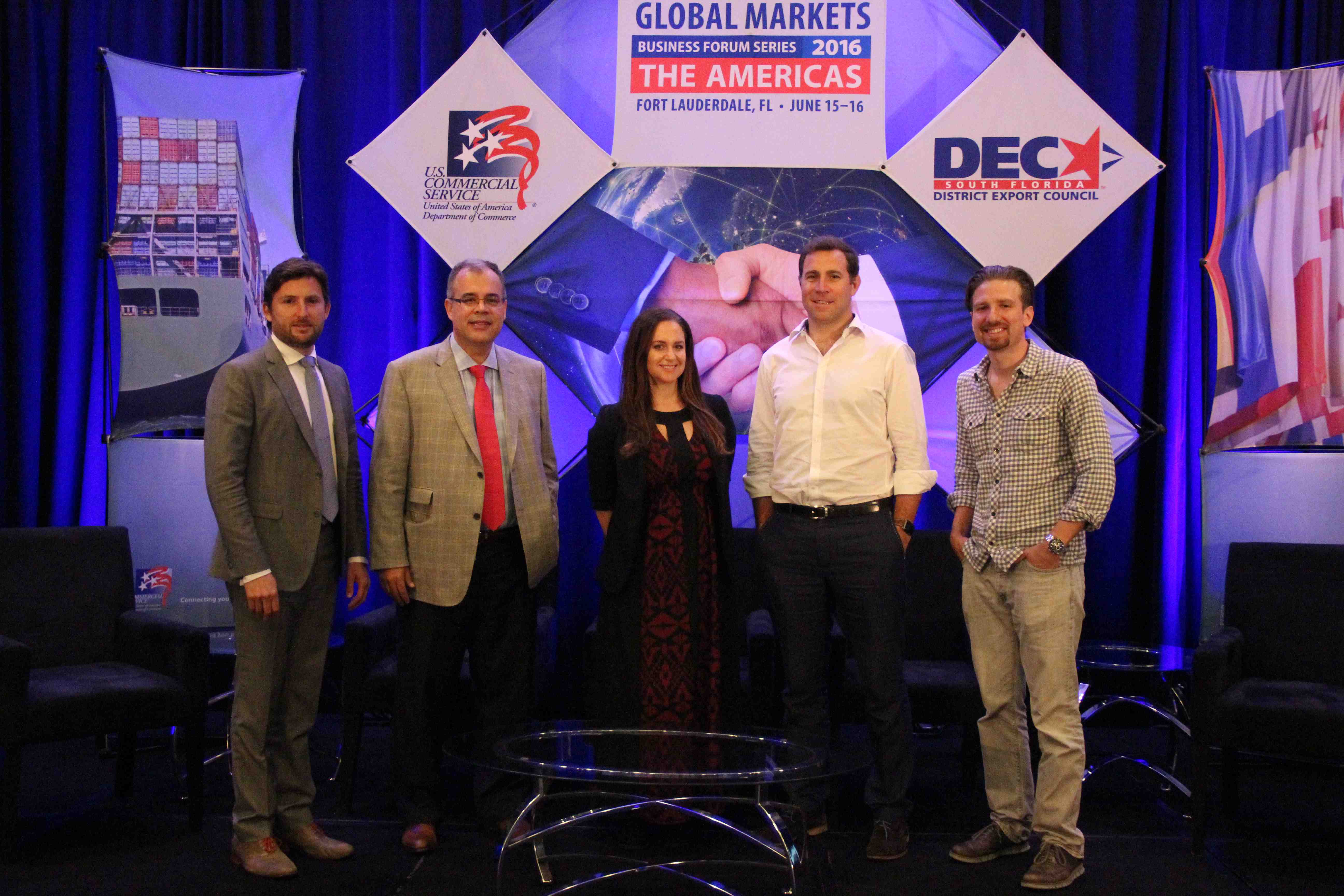 I arrived to Buenos Aires in November 2012, originally only to work remotely for a few months and avoid the North American winter. I didn’t have any contacts or friends in Argentina, so I thought the best way to meet people would be to join the local startup community.

I was surprised to see that despite the large amount of entrepreneurs and startups that existed in the city, there was no actual community. The landscape was very fragmented, difficult to navigate and lacked serious resources. I started to meet people organically, and tried my best to help them find the tools and connections they required. That’s when it occurred to me that this needed to exist on a much larger scale, which is how the idea of Startup Buenos Aires was born.

Originally, it was meant to be a resource hub, a place where people could go to get the tools and connections they needed for startup growth and scalability. Then something amazing happened: More and more people began to hear about the mission, got on board, and within a few weeks the concept became a reality and SUBA was born. It evolved from a resource hub to a major startup center and we built a platform with three major concentrations— education, community, and resources.

And where are you guys at today?

We’re really proud of the progress we’ve made over the past two and a half years. We’ve grown to be one of the main organizations in Argentina to represent the startup, tech, and entrepreneurial community. We currently have about 5,000 members globally and our organization has brought nearly 1 million USD to the country, in the form of development projects, jobs and competitions. Right now we’re looking to expand regionally and create an investment portal, which would essentially connect high-potential startups in Latin America with global investors interested in the region.

Last time we talked, you were working on monetizing your community. How is that going?

We’ve reformed our business model to adjust to the global market opportunities by creating an outsourcing hub with the leading software factories and development studios in Buenos Aires. We host a talent database with these companies and match them with startups and companies in the US and Europe who are interested in offshoring development projects or entire IT teams. We serve as a development consultant to clients interested in outsourcing technology, while serving as a sales facilitator to local service providers interested in reaching global clients.

Can you talk a little bit about how the startup scene has changed since you launched Startup Buenos Aires?

Since the growth of Startup Buenos Aires, the community is more tangible, palpable, and easier to navigate. There is more collaboration within the community and there are more global opportunities. With the new government, Argentina is in a transitional phase and creating businesses will soon be easier and hopefully more efficient. I expect to see Argentina become a major player in the the world of startup ecosystems, as there’s an incredible amount of intellectual capital here — and perhaps a more stable macroeconomic environment to come in the future.

I suppose it was when I first started SUBA, and I wasn’t experienced regarding the business culture in Latin America. I come from New York City, where everything is fast paced, especially when it comes to doing business. I approached the launch of Startup Buenos Aires like a New Yorker: With quick precision, effective marketing, and an efficient outreach.

Unfortunately, none of that worked. None of the influencers I reached out to responded to my emails, or provided any feedback on the ideas I had to improve the city. I was confused as to why people weren’t interested in the program. It was an altruistic project that would help improve the entrepreneurial community; why wouldn’t people want to get on board, or at the very least respond to my emails?

Then, I met with a local businessman who is half Argentine, half American, and he set me straight. He advised me that my emails were too forward and could be interpreted as abrasive, since I was so focused on efficiency, and did not once address building a relationship or meeting in person. Relationships are one of the most valued aspects of business in Latin America, and I missed that completely. I adjusted my pitches and made relationship building a focus and priority in my outreach, and once I did so, I received a 100% response rate.

The key to being a successful expat, or doing business abroad, is being able to adjust to the local business culture and climate, while still maintaining your mission. As a friend of mine, Chris Dessi, said, “Be rigid in your vision, but flexible in your execution.”

Do you think that Argentine culture is lagging a bit a behind the US when it comes to adopting new technologies and services?

In certain aspects, yes, Argentina is a bit behind when it comes to accessing different tools or products the rest of the world may have. However, in many other ways I believe Argentina is ahead of the curve, due to the forward thinking entrepreneurs and technology specialists the country has created.

There are so many “smart” and iOT products that have been produced and created by Argentines. Entrepreneurship is embedded in their DNA, and some of the most innovative people have come from this country. So yes, perhaps in one aspect the country may be a bit behind when it comes to certain tools, however, in many other ways I believe they’re light years ahead when it comes to innovation and creating new technologies.

Please correct me if I’m wrong, but Startup Buenos Aires is largely volunteer-run, right? Can you talk a bit about how you’ve motivated people to help you run your organization?

Correct, our entire leadership team is made up of volunteers. We’ve been fortunate to attract the best and the brightest minds in Buenos Aires to our team and they have been the driving factor of our success and growth. SUBA wouldn’t exist without the amazing team we have that dedicate their time and energy to the cause.

It is, of course, a challenge to keep volunteers motivated and involved without financial incentive, but luckily the impact they’re making on the city  —and the mission we’re creating together — has been strongly motivating.

Also, another challenge is that Buenos Aires is a revolving door of talent, so many people come and go. We’ve had to say goodbye to a lot of really great team members because their time was up in the city or they’ve moved on to start their own endeavors.

I believe passion is infectious, and when you get likeminded individuals in a room together, discussing real change and impact for not only a company or organization, but also an entire city, it creates a real sense of dedication.

We’re working towards achieving something greater than ourselves; each of us are leaving our mark on the city of Buenos Aires and the entrepreneurial community, so that’s been a solidifying factor in our team’s commitment and motivation.