Everyone Pivots: The Truth About A Startup Pivot

Startup Founders, it's time to change your relationship with changing your mind.

Toward the end of Season 1 of HBO’s incredible Silicon Valley, there’s an amazing scene that this writer has legit watched on YouTube about a hundred times.

The Pied Piper team is at TechCrunch Disrupt, coming off the high of unveiling their compression algorithm to a veritable whos-who of the tech world. Then, disaster strikes. Mega-corporation Hooli is there, and they’re presenting a technology that is identical to the product Pied Piper is building.

Panic inevitably ensues among the Pied Piper ranks. Then, a notably manic Jared, fresh from the traumatic experience of being kidnapped by a self-driving car, has a brainwave.

What Pied Piper needs to do, he thinks, is pivot.

The scene is, of course, ridiculous. But like so much on that show, it wouldn’t be as funny if it weren’t for the underlying kernel of truth.

What is a startup pivot?

A pivot is essentially a shift in business strategy to test a new approach regarding a startup’s business model or product after receiving direct or indirect feedback, and it’s one of the fundamental concepts of lean startup methodology.

Entrepreneurs that practice lean startup methodology are encouraged to question everything — from their initial idea, to their design choices, to any features they’re considering adding. In the lean process, entrepreneurs discover their minimal viable product (MVP), which is typically released to a select group of test customers to determine what improvements need to be made.

While the MVP is often  extremely minimalistic, the feedback from the initial group of test customers helps entrepreneurs learn what’s working, understand what isn’t, and figure out what direction they should go.

The general idea is that startup founders should follow the model — dubbed the “build-measure-learn” — repeatedly, with the goal of turning that MVP into a sustainable business. Oftentimes, that feedback leads founders to pivot their startup from one idea, market, or niche to another in their quest for a great product. 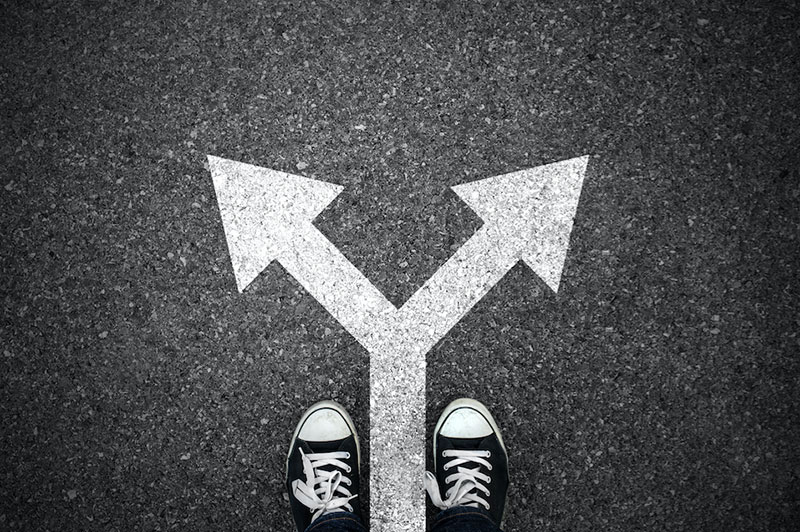 PIvoting is a Startup Rite of Passage

Pivoting really is such a ubiquitous part of the startup business experience, it’s basically a rite of passage for entrepreneurs.

Virtually everyone who’s started a company has a story about the time that company became a different company. But the reality of pivoting looks and feels quite a bit different from the way it’s presented on the show.

Here, Pinpoint Founder John Saddington and Printfection Founder Casey Schorr share their experiences with pivoting in business, and what it really feels like to change the direction of your company in a big way.

“Not a Big-Bang MOMENT”

The big question that’s always lurking around the subject of pivoting is: how do you know when it’s time to pivot your startup?

In Casey Schorr’s case, he says, “It was a natural evolution, not a big-bang moment.”

Casey’s company, Printfection, started as a B2C e-commerce platform for artists and designers looking to make a few bucks by selling t-shirt designs to consumers. “The first business was full of raw youthful energy [and] a passion for technology,” Casey recalls. “[But] we grew the first version without a lot of discipline or thought for what we really wanted in life – what we were really passionate about.”

Over time, Casey says, he and the team came to a few epiphanies that changed the direction of the company:

The first realization Casey and his team came to: “We weren’t passionate about the business model,” Casey remembers. “We didn’t find deep fulfillment in slaving away every day, every weekend to build this kind of business. We realized we were passionate about helping other businesses grow.”

The second realization came when the Printfection team took a look at their numbers. “When we dove into the metrics, we realized our best customers were actually businesses using our platform in a way it wasn’t designed,” Casey remembers. “They didn’t want to make extra money selling t-shirt designs – they wanted to get their brand into the hands of their fans, and they were using our platform and fulfillment capabilities to do it.”

Put those two big realizations together, and you get the decision that came next. “We realized we should pivot into the promotional marketing space, and apply our tech know-how to that problem,” Casey remembers. If customers were already using the platform for more B2B purposes, and the team was more passionate about B2B applications, pivoting was just the natural fit.

Moral of the story: startup pivots don’t just happen out of the blue. If pivoting is the right move for your company, the signs will be there. The trick is recognizing them when you see them (more on that in a bit).

IT’S NOT (JUST) ABOUT THE MONEY

One of the biggest misconceptions about pivoting is that your company has to be failing before you can decide to go in a different direction. But for Casey and his team, that wasn’t the case at all.

“For me, the hardest thing about pivoting was we were not ‘failing,’” Casey says. “Our original business was doing over $1 million in sales. We were making money.”

But if there’s one myth in the startup world that’s more damaging than any other, it’s that money alone is reason enough to keep building something. For Casey and the rest of the Printfection team, what it really came down to was the passion – or lack of it.

“To have a shot at creating something amazing, it’s going to cause stress on the entrepreneur, the family, everyone around you. It takes sacrifice. So I better be super passionate about whatever I’m doing,” says Casey. “I’m a 100% or nothing type of person. I didn’t want to spend years working on something I wasn’t passionate about. When I lost the passion, I knew I needed to pivot.”

In fact, veteran entrepreneur Kevin Sandlin wrote a great article on his site about the impact that running a startup and the entrepreneur lifestyle can have on family life and how you almost need a certain level of freedom to succeed.

GOING FOR GREAT, NOT GOOD

All this being said, Casey and the Printfection team could have kept going with the B2C model. They could have coasted along, built a decent six-figure business, and then sold out when a bigger player in their space came along with an offer.

In hindsight, Casey says, the problem with the early iteration of Printfection was they were following a blueprint of something that had already been built. “We were copying existing companies and trying to put a different ‘spin’ on it. It wasn’t authentic,” Casey says.

Once they made the decision to go after the B2B play, on the other hand: “We focused on creating something unique – something we could be #1 at. We went after the big blue sky opportunity.”

THE IMPORTANCE OF GOOD PEOPLE

As  John Saddington points out, sometimes you just don’t.

“As the entrepreneur, I’m just too close to the project to see 100% clearly. And, in many cases, I’m just straight-up blind to the facts and reality,” he observes. “It’s impossible to know your own blind spots. That’s why they’re called blind spots.”

The best way to counteract your blind spots, John says: find good people who can see what you can’t. “The most important thing that I’ve learned to do is have great folks in my life help me navigate these hard decisions,” John says. “Specifically, gathering what I call ‘conversation partners,’ who are advocates of me, but who are not financially tied to the project. They ask me the hard questions about what I’m doing, the timing, and the effectiveness of my work and the results.”

Casey echoes John about the importance of getting feedback about your tough business calls – pivoting included.  “Find a trusted business partner, preferably someone who’s very different and brings a completely different skillset to the table,” Casey advises. “That way, when you engage in a conversation you’re going to get a completely different viewpoint. It really helps flesh out the tough questions and make better decisions.”

When you’re a Founder, your company is like your baby. Like any parent, it’s natural that you have a hard time being objective about that baby’s future. Finding partners who want the best for you and your company, but are objective enough to tell you when you need to put your company on timeout or kick it to the curb is the best way to make sure your decision-making process isn’t clouded by too much emotion.

PIVOTING Your Startup IS NOT QUITTING

One thing a lot of Founders struggle with when making the tough call to pivot: fear of being branded with that big, red “F” for failure. Society in general conditions us not to be a “quitter.” And within the startup community, that pressure to persevere gets ramped up to eleven.

“A mentor of mine gave me a gift and shared with me that perseverance was the act of consistently making the same decision over and over and over again,” John says. “I used to ask myself if I had the grit or resolve or perseverance to be a success. Now, instead, I ask myself if I was able to wake up every morning, make the same decisions that I made the previous day, and feel okay with that.”

Waking up day after day and grinding away at something that isn’t working isn’t perseverance – it’s insanity. The gift of letting go of this idea that you have to persevere no matter what: it gives you permission to make a different choice.

“If I ever wake up and I feel different about the decision, or if the conversations that I’m with the people that I trust the most fundamentally change, then I know that I have to pivot,” John says.

Best of all: this shift in his thinking about perseverance changed how John saw himself as an entrepreneur for the better. “It helped me feel less like a failure in regards to perseverance, and more like a leader making better business decisions.”

At the end of the day, the important thing to remember about pivoting is that change is just part of the startup process.

“Many things in life are a line, not a dot,” Casey Schorr observes. “Entrepreneurship is not a big-bang event to make a static vision come to life. It’s a way of life, a crooked line always adapting and evolving.”

The important thing: stay true to your gut, keep asking for feedback, and go after the thing that makes you excited to get to work every day. Everything else is just window dressing.