Interview with Nate Checketts, Co-Founder and CEO of Rhone (Part I)

Nate Checketts takes us inside his journey from working at the NFL to running his own activewear brand – and what he's learned about a balance along the way.

This is Part I of our interview with Rhone co-Founder and CEO Nate Checketts. Check in next week for Part II!

When you’re starting a new company, the week your site launches is pretty much guaranteed to be the most stressful week of your life, even under the best circumstances.

The circumstances that Nate Checketts was dealing with in the week leading up to the launch of his company, Rhone? Let’s just say they were a little less than the best.

“A week before the launch, my co-founder’s kitchen caught on fire and nearly burned his house down. So he and his family – he had three kids at the time – had to move out and find temporary housing,” Nate remembers. “And then three days before the launch, I stayed up until about 4 in the morning for the third night in a week, working on the site and making sure that everything was ready and that we were good to go – knowing full well that I was going to have to wake up in two hours and go put in a full work day at my regular day job.”

When Nate woke up the next day, it wasn’t in his bed, or even at his desk  – it was in the hospital. Nate has Type 1 diabetes, and he had a severe low blood sugar which led to a series of seizures that night that woke his wife from her sleep. Thankfully, his wife acted quickly and rushed Nate to the hospital.

“It’s the only time that it’s ever happened to me,” Nate explains. “But I was just so stressed out getting ready to launch this company, that I forgot to take care of myself and my body just couldn’t take it.”

Not surprisingly, weathering two close calls like that back-to-back within a week of launching their company led to some serious soul-searching for Nate and his co-Founder, Carras Holmstead.

“We sat down and had a conversation, where we kind of looked at each other and we said, ‘Hey, do we really want to do this? We don’t have to be starting a business. We have good jobs. We both have families and mortgages. We don’t have to do this.’” 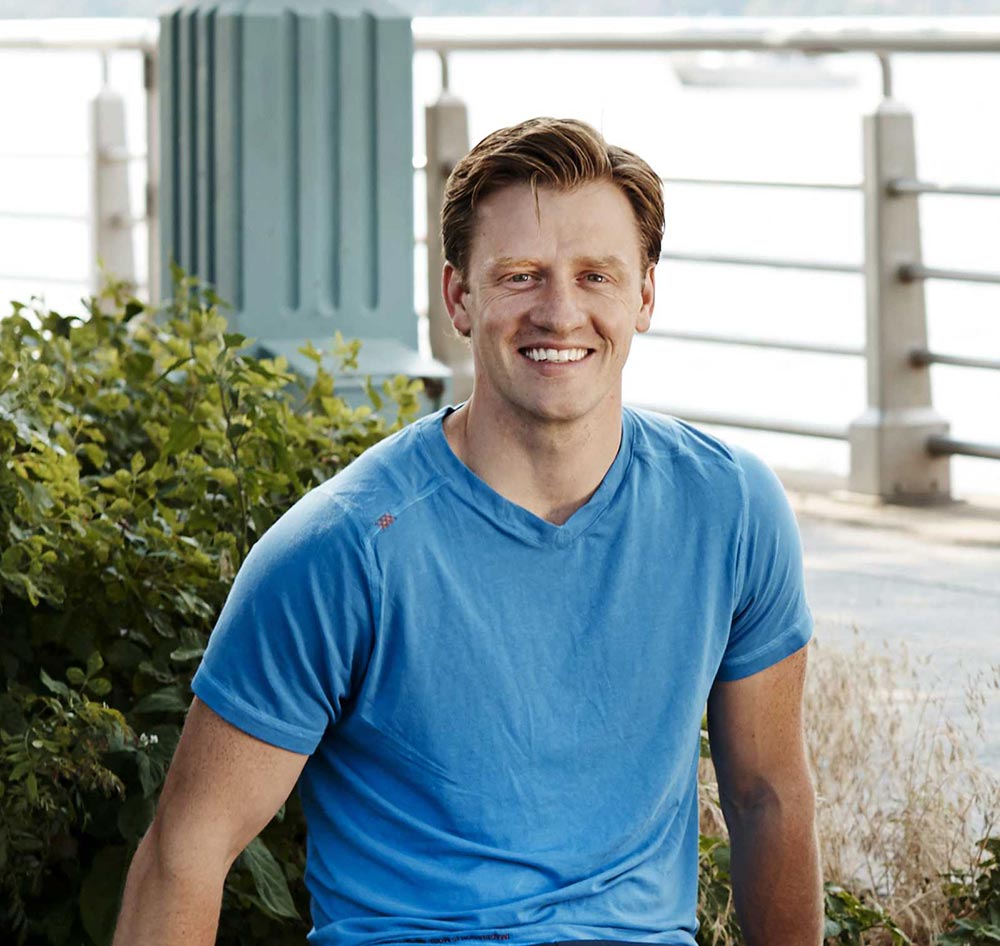 NO MAN CAN SERVE TWO MASTERS

Nate and Carras had good reason to be invested in what they were building. By the time they launched their premium men’s activewear brand in November 2014, they’d been working on the idea for over a year – and holding down demanding full-time jobs in New York City at the same time.

Making it happen meant grabbing snippets of time whenever and wherever they could – up to and including the commute to and from the office.

“We were both commuting into New York City on the train,” says Nate. “And so on the train ride into the city, we would work on the business – plan it out, talk with designers, talk fabric selection. And then we’d put our Rhone stuff away, pack it into our briefcases, go into the city, put a full day in, get back on the train and start working again.”

Did I ever feel overwhelmed, or like I wasn’t giving one thing or another enough attention? The answer is yes, all the time.

Making headway on the business while holding down full-time jobs and making time for family at the same time? That, says Nate, was a next-level lesson in extreme time management.

“Mondays, Wednesdays and Fridays, I would leave the house very early, sometimes at 4:30 in the morning, to go and get into the office early and have enough screen time where I could get everything done that I needed for Rhone before the work day would start,” he says. “And then I would have a full work day, and I would try to come home early to have dinner with my kids and my wife, at least be able to see them get into bed three nights per week. Then Tuesdays and Thursdays, I would leave on time so I could at least see my family in the morning, but then I would work until 10, 11 o’clock at night sometimes, and take those extra hours after the general work day to work on Rhone.”’

It may sound simple, talking about it in hindsight, but Nate is the first person to say that, at the time, it was anything but easy.

“Did I ever feel overwhelmed, or like I wasn’t giving one thing or another enough attention? The answer is yes, all the time. That’s how every single day felt for me. I had this running thought in my mind that ‘No man can serve two masters,’ and I struggled with that a lot.”

Finally, almost a year after a soft-launch and over two years since starting work on the company, Nate made the decision to quit his day job and make building Rhone his full-time focus.

When I ask what it was that clinched the decision to move to Rhone full time, Nate points to the overwhelming response from customers during that first year. “We were blown away with the first two months of sales,” he says. “We were getting emails from people all over the country who just loved the aesthetic and loved the mission behind the brand and what we were trying to stand for. At that point, it became a much easier decision to come on board and focus on the brand.”

Making the switch from being one of thousands at a major organization like the NFL to being one of five at a tiny startup – and running that startup? The word some people (this writer, for example) would use to describe it might be “terrifying.” For Nate, though, the word he used was “invigorating.”

There was just so much energy that I’d been holding back in the previous years and all of a sudden it was like, “Okay, now you can spend as much time on the company as you want.”

“It was such a relief to move into Rhone full time, because I was getting to the point where I was enjoying all those hours far more than what I was doing at my day job,” Nate remembers.

But as plenty of Founders before and after Nate can attest, getting that green light to go all-in on your business can come with its own set of challenges.

“I was so excited, and I had so much unbridled energy and passion to just throw it into the company, my biggest challenge was just putting those constraints back in to make sure I wasn’t becoming too much of a workaholic on the business,” says Nate. “I found I wasn’t taking enough time to take care of my own personal fitness and well-being, and enough time for my family, because there was just so much energy that I’d been holding back in the previous years and all of a sudden it was like, ‘Okay, now you can spend as much time on the company as you want.’ And so the first few weeks it was about trying to get a new schedule and a new discipline.” 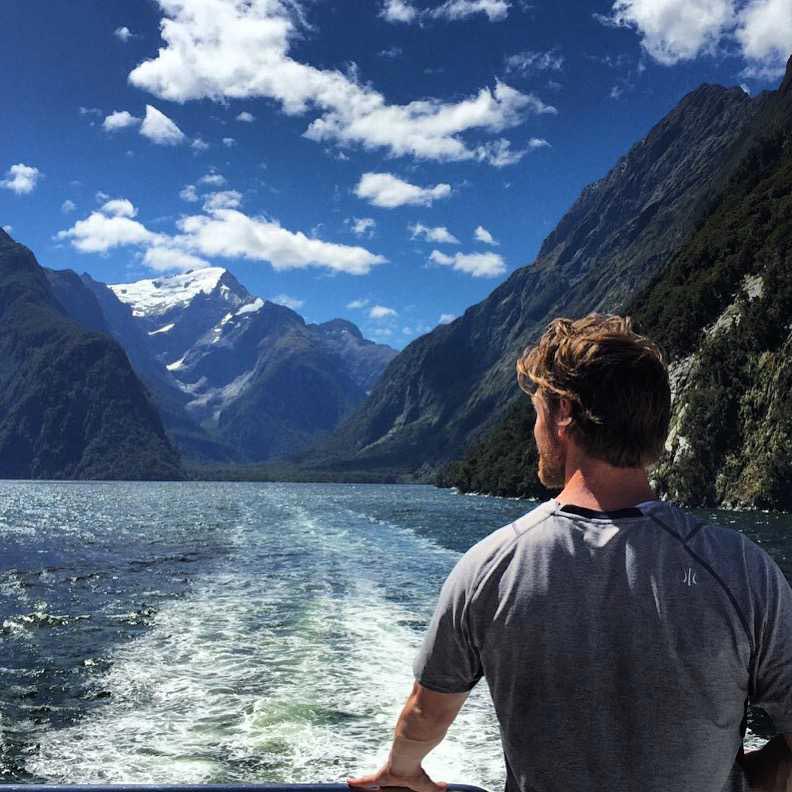 Today, finding the balance continues to be a priority for Nate – and not just for himself, but for his entire team.

When Nate and I talked, the team had just returned from a company retreat in Utah, where they hiked, hung out – and, yes, did some work on the company. And once a week, the whole team takes part in the company Sweat of the Week, where they go out and try a new activity – anything from pilates to CrossFit to basketball to sledding – “and the whole team goes out and sweats together and has a good time.”

As for how he keeps that balance, Nate says it’s all about perspective. “Balance takes constant calibration, personal inventory and check-ins with the people who matter,” Nate says. That includes your team, your family – and yourself.

Just as important in the early days, Nate says: accepting that you just don’t know the answers – that you don’t know how things are going to turn out.

“As entrepreneurs, we need to embrace and appreciate our own ignorance,” Nate says. “If we had known how difficult it was going to be to get a company and brand off the ground, we may have never started. It’s the fact that you don’t know how challenging it’s going to be that gets you to move forward and move out the door.”

It’s not just the willingness to admit that you don’t know that makes the difference, Nate says. “I think if you combine that ignorance with just sheer determination to work through challenges as they arise, it’s a pretty powerful combination.”

See Part II of our interview.