Analyzing Business Competitors Is Like A High-Stakes Game Of Battleship

“Think of business as a good game. Lots of competition and a minimum of rules. You keep score with money.”
—Bill Gates

It’s called “competitive landscape” for a reason: competitors are a crucial part of the terrain your company will have to navigate in order to get where you’re going. Who your competitors are, what they’re doing, how they’re doing it – these considerations will impact some of the most important decisions at your company, touching everything from pricing to messaging to marketing.

Doing a solid competitive analysis is like setting up for a game of Battleship with the divider down. When you can see where your opponent is putting their ships, you can be that much more strategic about where you’re placing your own. 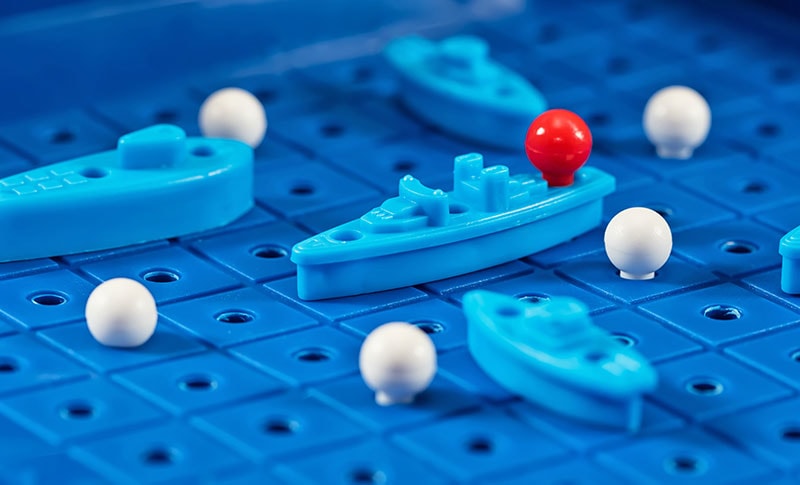 For this session of Startups Live, startup consultant Sheana Ahlqvist joined us to chat about sizing up your business competitors – and a few mistakes that could sink your ship before you even get out of the harbor.

“WE’RE THE ONLY ONES DOING THIS!” ARE YOU, THOUGH?

We’ve talked in the past about “first-and-only-itis” – a strange disease some Founders seem to suffer from where they insist that they’re the first and only company to do what they do or offer the service they offer.

At Startups.co, we’ve helped thousands of companies think through their business strategy, including competitive analysis. And if we had a dollar for every time we’ve asked a Founder “Who are your competitors?” and heard the response, “We’re the only one doing this,” we could stock our beverage fridge for a year.

If we had a dollar for every time we’ve asked a Founder “Who are your competitors?” and heard the response “We’re the only ones doing this,” we could stock our beverage fridge for a year.

Sure, every once in a blue moon there’s that Founder who is doing something truly unprecedented and visionary. Please don’t take this the wrong way, but it’s highly unlikely that you are one of those Founders.

So please, for the love of all things startups, do your research and figure out who your competitors are. And, as Startups Live regular Art Trevithan, Chief Operating Officer and Founder at Velocity Vue, so perfectly put it during our session about idea validation: “If there’s no competition, you better be darn sure you are not on crack.”

One surefire way to avoid “first-and-only-itis”: make sure you build some room into your definition of “competitor.”

During our chat about pricing strategies, Britt Crawford talked about the importance of accounting for substitutes, as well as direct competitors in business. That advice goes for all aspects of your business, not just pricing. Even if your target customers aren’t using a product exactly like yours to solve the problem, chances are they’re using some kind of alternative – even if it’s something they’ve cobbled together with paperclips and duct tape.

“Your competition is not always startups. The big ones are incubating ideas, too.”

By the same token, don’t make the mistake of limiting your competitive analysis just to other small companies, either. As Startups Live contributor Goutham points out, “Your competition is not always startups. The big ones are incubating ideas, too.” In fact, “the big ones” may just be the ones you need to look out for the most.

A big ship may be hard to turn, but if the Googles or Facebooks or Ubers of the world set their sights on your solution or target market, watch out – they’ve got the firepower to sink your ship in a heartbeat.

Whatever the “status quo” is for your target audience –  whether it’s a major company, another startup, or some home-brew solution – it’s a competitor for your business. Fail to account for it at your peril.

… BUT NOT TOO WIDE

It’s important to cast a wide net when thinking about your business competitors. But this is another one of those situations where the advice gets a little contradictory, because you don’t want to cast your net too wide.

A big mistake that Sheana Ahlquist sees startups making on this score: claiming their product is for everyone. “‘Who will use this?’ ‘EVERYONE WILL USE THIS!’ is a bad exchange,” Sheana points out. “It means you haven’t really defined a specific problem or a target audience. Even a product like Google, which is for everyone, started by focusing on a specific group of users: Stanford Graduate students.”

“‘Who will use this?’ ‘EVERYONE WILL USE THIS!’ is a bad exchange. It means you haven’t really defined a specific problem or a target audience.”

Why is that important from a competitive standpoint? Because if everyone is a target customer, then pretty much everything is a competitor. It’s way more challenging to defend yourself on ten fronts rather than one or two.

If no one is coming for you on six of those fronts – or you decide that you don’t really care if they are – you can focus all of your energies on those two fronts you’re actually interested in.

Sheana shared this example of a company making a tough call about defining their landscape:

“I recently worked with a high-end meal delivery company. They found that their vegetarian options weren’t performing well,” Sheana explains. “When we examined the competitive landscape, it was clear that some competitors were specializing in plant-based options. Although [my client] was offering something for vegetarians, their competitors were nailing it – hitting that market night and day.”

At that point, Sheana says, her client company had a decision to make: should they continue competing for market share in the vegetarian space against competitors who were handing their butt to them on a consistent basis? Or should they cede that market in order to consolidate their resources and focus on kicking ass elsewhere?

“Rather than competing in something that wasn’t their specialty, they decided to discontinue that program and focus on their strengths,” Sheana says.

Moral of the story: before you start identifying who your competitors are, make sure you’re clear on who you are – and who you aren’t – and then organize your competitive strategy accordingly.

WATCH OUT FOR SHIPWRECKS

When we think about “competition” we tend to think about the companies that are out there right now and how we can set ourselves apart from them.

Why? Because they tell you what mistakes to avoid. “If lots of companies have tried and failed, why?” asks Sheana. “Maybe the market size is too small, maybe consumers aren’t willing to pay.”

Chances are your landscape is strewn with the corpses of companies that have tried what you’re doing (or something similar) and failed. As you’re developing your competitive analysis, keep those failed competitors in your sights, or you might go down the same way they did.

“It’s important to have your own vision,” Sheana says. “Don’t get too bogged down in what others are doing.”

Want to know more about unexpected competitive stumbling blocks?
Read David Fauchier’s case about why your real competition is irrelevance.

Looking for ways to strengthen your advantage against competitors?Check out Jiffy Iuen’s article about why competitive analysis starts at home.