3 Ways to Make Your Crowdfunding Marketing Campaign a Smash Success

Let’s say that marketing is cake. Traditional marketing is a standard cake you'd whip up from a box or simple recipe. Crowdfunding campaigns, however, are like a souffle. A souffle — when done right — delivers a kind of magical combination of lightness and richness. When done wrong, it just falls into a heap. Souffles and crowdfunding can yield incredible results. But in both cases, you have to take a more nuanced approach to reach that outcome: Preheat your campaign with research, thoroughly mix in your brand story, and garnish with enticing visuals.

Marketing for a crowdfunding campaign isn’t exactly the same as traditional marketing.

Let’s say that marketing is cake. Traditional marketing is a standard cake you’d whip up from a box or simple recipe. Crowdfunding marketing campaigns, however, are their own kind of cake. They’re like a souffle. A souffle — when done right — delivers a kind of magical combination of lightness and richness. When done wrong, it just falls into a heap.

Souffles and crowdfunding can yield incredible results. But in both cases, you have to take a more nuanced approach to reach that outcome. 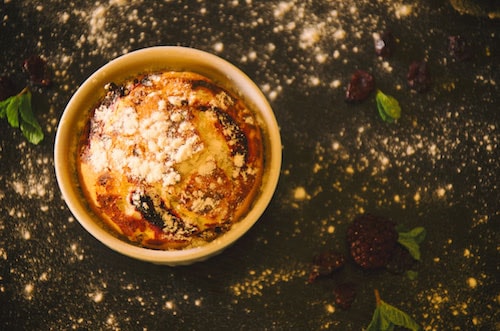 A crowdfunding marketing campaign is different from traditional advertising efforts, and it needs to hit a specific sweet spot. The tone can’t feel like an overly polished “Mad Men”-esque masterpiece — you’re aiming for casual and innovative. A more rigid tone has people questioning why you are even crowdfunding at all. People want to be carried along on a crowdfunding ride; they want to help you make something out of nothing.

It’s not that you should ignore the bedrock principles of marketing. The key is taking traditional marketing’s chapter-and-verse fundamentals and putting a new spin on the approach.

Take a look at what Antsy Labs did with its crowdfunding marketing campaign for funding the FidgetCube. If you have a rep for being a compulsive pen-clicker, you’ve probably already been tagged in the FidgetCube promotional video.

The aptly named FidgetCube connects a host of tactile widgets to a small pocket-sized base, letting you spin, click, and roll its tiny interactive features.

The founders marketed their Kickstarter campaign with a promotional video. The video features a man confessing his drive to fidget, and there is an almost universally relatable sequence of the man popping bubble wrap.

This man’s struggle, the video seems to say, is real, and the only treatment is FidgetCube. It’s earnest and funny: “Side effects may include a sudden ability to cope with boring meetings,” the video jokes.

It’s also a smash marketing success. The FidgetCube Kickstarter goal was $15,000, and it earned $6.4 million from backers. The McLachlans executed a perfect example of a crowdfunding-specific approach.

For companies aiming for similar success, here are a few good starting places:

The pre-launch time is precious in a crowdfunding campaign. Use that time to compile massive email lists for prospects and targets, set up a launch event, and recruit as many niche publications as you can.

Don’t overlook local publications, which are often eager to feature the efforts of nearby entrepreneurs.

In the pre-launch days, focus on the “why” of your product. Take the time to dig into any available data. Find out who your project is for and where they spend their time online, and determine the shortest path to putting your product in front of them.

The critical ingredient to crowdfunding marketing success is the ability to deputize your target audience into sharing and then deputize new targets.

In order to set off that alchemical chain reaction, you need to build an initial interest among the most interested core market for the product and then test the audience’s response and incorporate that feedback into the final launch.

2. Thoroughly Mix in Your Brand Story

Nearly every marketer knows how essential a good brand story is, and it’s even more important with crowdfunding. Again, people want to be taken along for the ride and feel like they’re helping bring great products to life. They can’t feel that way unless they know your story.

There are a few key things to keep in mind when crafting a good crowdfunding story. First, connection with the audience is critical, so you need to have a character in the story that connects to potential backers.

After establishing the character, guide your backers through that character’s central conflict, and show them that your product resolves the conflict. Finish off with a classic call to action. Tell donors how they can jump in and be a part of the story. Make your “ask” of the audience bold and bell-ringingly clear.

The expression often used in cooking shows about food is that we “eat with our eyes first.” The same is true of crowdfunding marketing.

There’s no hard rule that the campaign must have a video, but Kickstarter stats demonstrate that projects with video are more likely to raise funds. Great video and visual elements can get backers enjoying the cake before they take their first bite.

You don’t need to come up with your own brand-new recipe for a great video. Someone else has already figured out a great method for creating crowdfunding videos. Look at the elements of previous successful videos, and apply your own unique concept and story to this borrowed template.

Remember, have your video focus on a narrative and deliver an experience to viewers first; then, deliver the sales pitch almost as an afterthought. Hitting your viewer first with a hard sales pitch is like a bad infomercial, not a successful crowdfunding campaign.

Backers have to care about the story and experience first before they think about entering their credit card number.

A perfect souffle requires specific techniques, but it delivers shockingly good results. The same is true of a crowdfunding marketing campaign.

Have you marketed for a crowdfunding campaign before, or are you getting ready to? Feel free to share your own comments, questions, or experiences in the comments.

Jesse Kaufman is CEO and founder of ShippingTree, a provider of cloud-based logistics and e-commerce fulfillment services for consumer product companies around the world. Through Jesse’s work with ShippingTree, he aims to streamline the supply chain by eliminating customs fees and expensive shipping costs for customers.